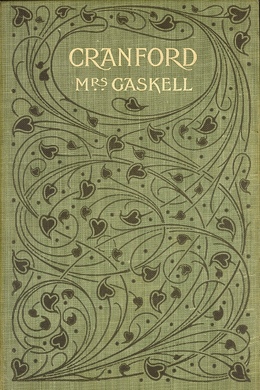 A portrait of the residents of an English country town in the mid nineteenth century, Cranford relates the adventures of Miss Matty and Miss Deborah, two middle-aged spinster sisters striving to live with dignity in reduced circumstances. Through a series of vignettes, Elizabeth Gaskell portrays a community governed by old-fashioned habits and dominated by friendships between women. Her wry account of rural life is undercut, however, by tragedy in its depiction of such troubling events as Matty’s bankruptcy, the violent death of Captain Brown or the unwitting cruelty of Peter Jenkyns. Written with acute observation, Cranford is by turns affectionate, moving and darkly satirical.

In the first place, Cranford is in possession of the Amazons; all the holders of houses above a certain rent are women. If a married couple come to settle in the town, somehow the gentleman disappears; he is either fairly frightened to death by being the only man in the Cranford evening parties, or he is accounted for by being with his regiment, his ship, or closely engaged in business all the week in the great neighbouring commercial town of Drumble, distant only twenty miles on a railroad. In short, whatever does become of the gentlemen, they are not at Cranford. What could they do if they were there? The surgeon has his round of thirty miles, and sleeps at Cranford; but every man cannot be a surgeon. For keeping the trim gardens full of choice flowers without a weed to speck them; for frightening away little boys who look wistfully at the said flowers through the railings; for rushing out at the geese that occasionally venture in to the gardens if the gates are left open; for deciding all questions of literature and politics without troubling themselves with unnecessary reasons or arguments; for obtaining clear and correct knowledge of everybody’s affairs in the parish; for keeping their neat maid-servants in admirable order; for kindness (somewhat dictatorial) to the poor, and real tender good offices to each other whenever they are in distress, the ladies of Cranford are quite sufficient. “A man,” as one of them observed to me once, “is so in the way in the house!” Although the ladies of Cranford know all each other’s proceedings, they are exceedingly indifferent to each other’s opinions. Indeed, as each has her own individuality, not to say eccentricity, pretty strongly developed, nothing is so easy as verbal retaliation; but, somehow, good-will reigns among them to a considerable degree.

The Cranford ladies have only an occasional little quarrel, spirited out in a few peppery words and angry jerks of the head; just enough to prevent the even tenor of their lives from becoming too flat. Their dress is very independent of fashion; as they observe, “What does it signify how we dress here at Cranford, where everybody knows us?” And if they go from home, their reason is equally cogent, “What does it signify how we dress here, where nobody knows us?” The materials of their clothes are, in general, good and plain, and most of them are nearly as scrupulous as Miss Tyler, of cleanly memory; but I will answer for it, the last gigot, the last tight and scanty petticoat in wear in England, was seen in Cranford—and seen without a smile.

I can testify to a magnificent family red silk umbrella, under which a gentle little spinster, left alone of many brothers and sisters, used to patter to church on rainy days. Have you any red silk umbrellas in London? We had a tradition of the first that had ever been seen in Cranford; and the little boys mobbed it, and called it “a stick in petticoats.” It might have been the very red silk one I have described, held by a strong father over a troop of little ones; the poor little lady—the survivor of all—could scarcely carry it.

Then there were rules and regulations for visiting and calls; and they were announced to any young people who might be staying in the town, with all the solemnity with which the old Manx laws were read once a year on the Tinwald Mount.

“Our friends have sent to inquire how you are after your journey to-night, my dear” (fifteen miles in a gentleman’s carriage); “they will give you some rest to-morrow, but the next day, I have no doubt, they will call; so be at liberty after twelve—from twelve to three are our calling hours.”

Then, after they had called—

“It is the third day; I dare say your mamma has told you, my dear, never to let more than three days elapse between receiving a call and returning it; and also, that you are never to stay longer than a quarter of an hour.”

“But am I to look at my watch? How am I to find out when a quarter of an hour has passed?”

“You must keep thinking about the time, my dear, and not allow yourself to forget it in conversation.”

As everybody had this rule in their minds, whether they received or paid a call, of course no absorbing subject was ever spoken about. We kept ourselves to short sentences of small talk, and were punctual to our time.