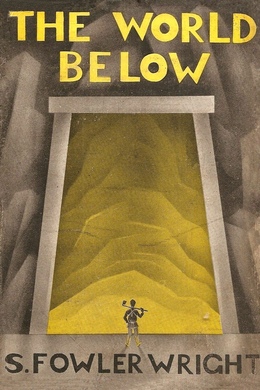 When George is transported to a far-future Earth, he finds himself caught between two very different species of humanity–the Amphibians, dwellers of the deeps, and the giant Dwellers, rulers of the large island that constitutes the major land mass. With the help of one of the Amphibians, George goes looking for any sign of two earlier time-travelers, neither of which has returned. His adventures among the strange flora and fauna of this brave new world constitute one of Wright’s most original and compelling imaginative fictions.

The night had fallen to blackness while we still lay in the rock-cleft.

The ashes of the central buildings glowed with a pale blue light and an occasional flame would rise up and lick across them like a ghostly tongue.

The long curve of the living-wall had fallen in from end to end, but the ashes were burning still, with a paler flame, so that it showed like a white bow in the darkness.

There were no stars; the night had clouded while we slept–for I lay long in a sleep of utter weariness and exhaustion, both of mind and body; and so, I think, in her own way, did my companion.

But I waked at length, with a dim sense of peril ended, and the short pause of security which is so precious to those who walk in dangerous ways, but conscious also of thirst and hunger, and of the shadow of great events, of which the significance was beyond my knowing.

I lay for some time in silence, pondering the strange things I had seen; reviewing–not without some mental discords–my judgment of the Bat-wings, and the fate to which it had cast them, and wondering vainly what new marvels or terrors might be before us, when we should penetrate the subterranean world of which we were about equally ignorant.

As I lay I became aware that the night was chilly, though, being cloudy, it was less so than we had experienced previously. But I was suffering from a lowered vitality, and though my wounds were trivial I was conscious of the throbbing of my scalded foot, and that my right shoulder was both stiff and painful.

I then fell into a mood of depression, in which I saw very vividly the folly of the adventure which we had undertaken. How could we hope to penetrate undetected into the domain of the Dwellers? There was no sanity in the supposition. If I wished to live till the year of my exile were over, should I not endeavor to find some crevice in the surface-world, of which I already knew something, where I might hope that my insignificance would save me?

If those whom I had come to seek survived at all, was I not more likely to discover them under such conditions, than among those whom I had seen squeezing the juice from the living bodies of the Killers, as casually as a cook stones raisins?

While I thought thus, my companion’s mind gave no sign, nor had I heard any movement from her. With a sudden start of terror I imagined that she were no longer beside me. It was in that panic fear that I realized how greatly I had come to depend upon her; alike upon her body for its vigor, and upon her mind for its counsel. And beyond this I knew that there was a spiritual quality in our intimacy, through which I was able to face the shadows of the unknown world of the distant future with something of her own serenity.

It was a simple action to reach out to feel where she lay beside me, and yet my hand delayed it.

Partly I may have been deterred by the atmosphere of aloof virginity which always made me diffident of any physical contact, partly it was that I dreaded to test my fear, as a man with a coward’s mind may leave a letter unopened, knowing that it may hold the news of his ruin.

At last, I felt across the narrow space which had divided us as we lay and watched the concluding drama of our adventure, and with a sense of measureless relief my hand touched lightly for a moment on the smoothness of the soft warm fur.

Her mind opened instantly, realised the mood I showed her, and crossed it with the gaiety with which she ever faced the thought of peril. Then–with the subtle distinction which she always drew between myself and the body in which I lived–she asked me, “Is it more trouble than usual? Has it no gratitude for the rest you have given it?”

I answered, “It is rested by sleep, but has gone without food long beyond its accustomed time. It can do this while it shares your vitality, but afterward the need re-asserts itself with increased urgency. It is cold also, and, as you know, it has suffered recent damage, which it needs rest to repair.”

She replied, “I can give you strength, if you need it, and if you think it wise; but consider.

“We have resolved on an adventure of which we do not know the length or the end. Of myself, I should continue in the ordinary course without food for about four months, after which I should require a time of rest and nourishment, before I should be fit for another year. If necessary, I could continue living, and in some measure of activity, for a much longer period. But I have been giving you of my own energy so freely that, if we continue in this way, I shall be exhausted in a much shorter time. Then I must return to my own place and people, as the food on which you rely–and the Dwellers also–is of no use to me. I ask this–is it better that we should continue to share the strength I have, or should we find food for your body, and so regulate our movements in future that we can make it self-supporting?”