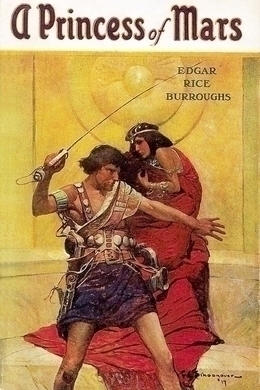 A Princess of Mars

A Princess of Mars is the first of eleven thrilling novels that comprise Edgar Rice Burroughs’ most exciting saga, known as The Martian Series. It’s the beginning of an incredible odyssey in which John Carter, a gentleman from Virginia and a Civil War veteran, unexpectedly finds himself on to the red planet, scene of continuing combat among rival tribes. Captured by a band of six-limbed, green-skinned savage giants called Tharks, Carter soon is accorded all the honor of a chieftain after it’s discovered that his muscles, accustomed to Earth’s greater gravity, now give him a decided advantage in strength. And when his captors take as prisoner Dejah Thoris, the lovely human-looking princess of the city of Helium, Carter must call upon every ounce of strength, courage, and ingenuity to rescue her-before Dejah becomes the slave of the depraved Thark leader, Tal Hajus!

I am a very old man; how old I do not know. Possibly I am a hundred, possibly more; but I cannot tell because I have never aged as other men, nor do I remember any childhood. So far as I can recollect I have always been a man, a man of about thirty. I appear today as I did forty years and more ago, and yet I feel that I cannot go on living forever; that some day I shall die the real death from which there is no resurrection. I do not know why I should fear death, I who have died twice and am still alive; but yet I have the same horror of it as you who have never died, and it is because of this terror of death, I believe, that I am so convinced of my mortality.

And because of this conviction I have determined to write down the story of the interesting periods of my life and of my death. I cannot explain the phenomena; I can only set down here in the words of an ordinary soldier of fortune a chronicle of the strange events that befell me during the ten years that my dead body lay undiscovered in an Arizona cave.

I have never told this story, nor shall mortal man see this manuscript until after I have passed over for eternity. I know that the average human mind will not believe what it cannot grasp, and so I do not purpose being pilloried by the public, the pulpit, and the press, and held up as a colossal liar when I am but telling the simple truths which some day science will substantiate. Possibly the suggestions which I gained upon Mars, and the knowledge which I can set down in this chronicle, will aid in an earlier understanding of the mysteries of our sister planet; mysteries to you, but no longer mysteries to me.

My name is John Carter; I am better known as Captain Jack Carter of Virginia. At the close of the Civil War I found myself possessed of several hundred thousand dollars (Confederate) and a captain’s commission in the cavalry arm of an army which no longer existed; the servant of a state which had vanished with the hopes of the South. Masterless, penniless, and with my only means of livelihood, fighting, gone, I determined to work my way to the southwest and attempt to retrieve my fallen fortunes in a search for gold.

I spent nearly a year prospecting in company with another Confederate officer, Captain James K. Powell of Richmond. We were extremely fortunate, for late in the winter of 1865, after many hardships and privations, we located the most remarkable gold–bearing quartz vein that our wildest dreams had ever pictured. Powell, who was a mining engineer by education, stated that we had uncovered over a million dollars worth of ore in a trifle over three months.

As our equipment was crude in the extreme we decided that one of us must return to civilization, purchase the necessary machinery and return with a sufficient force of men properly to work the mine.

As Powell was familiar with the country, as well as with the mechanical requirements of mining we determined that it would be best for him to make the trip. It was agreed that I was to hold down our claim against the remote possibility of its being jumped by some wandering prospector.

On March 3, 1866, Powell and I packed his provisions on two of our burros, and bidding me good–bye he mounted his horse, and started down the mountainside toward the valley, across which led the first stage of his journey.

The morning of Powell’s departure was, like nearly all Arizona mornings, clear and beautiful; I could see him and his little pack animals picking their way down the mountainside toward the valley, and all during the morning I would catch occasional glimpses of them as they topped a hog back or came out upon a level plateau. My last sight of Powell was about three in the afternoon as he entered the shadows of the range on the opposite side of the valley.

Some half hour later I happened to glance casually across the valley and was much surprised to note three little dots in about the same place I had last seen my friend and his two pack animals. I am not given to needless worrying, but the more I tried to convince myself that all was well with Powell, and that the dots I had seen on his trail were antelope or wild horses, the less I was able to assure myself.

Since we had entered the territory we had not seen a hostile Indian, and we had, therefore, become careless in the extreme, and were wont to ridicule the stories we had heard of the great numbers of these vicious marauders that were supposed to haunt the trails, taking their toll in lives and torture of every white party which fell into their merciless clutches.

Powell, I knew, was well armed and, further, an experienced Indian fighter; but I too had lived and fought for years among the Sioux in the North, and I knew that his chances were small against a party of cunning trailing Apaches.