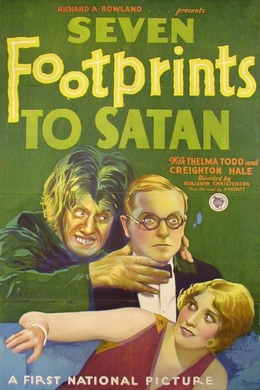 The most beautiful and powerful people in the world had bargained with the Devil. They played Russian Roulette with seven footprints to world domination–and lost. They had become subject to the Collector of Infernal Revenue–Satan. The Master Player of games would glut his lust with souls and gain world power through diabolical manipulations. But into his collection comes James Kirkham, an American explorer determined to prove that the steps are stacked.

The clock was striking eight as I walked out of the doors of the Discoverers’ Club and stood for a moment looking down lower Fifth Avenue. As I paused, I felt with full force that uncomfortable sensation of being watched that had both puzzled and harassed me for the past two weeks. A curiously prickly, cold feeling somewhere deep under the skin on the side that the watchers are located; an odd sort of tingling pressure. It is a queer sort of a sensitivity that I have in common with most men who spend much of their lives in the jungle or desert. It is a throwback to some primitive sixth sense, since all savages have it until they get introduced to the white man’s liquor.

Trouble was I couldn’t localize the sensation. It seemed to trickle in on me from all sides. I scanned the street. Three taxis were drawn up along the curb in front of the Club. They were empty and their drivers busy talking. There were no loiterers that I could see. The two swift side-rubbing streams of traffic swept up and down the Avenue. I studied the windows of the opposite houses. There was no sign in them of any watchers.

Yet eyes were upon me, intently. I knew it.

The warning had come to me in many places this last fortnight. I had felt the unseen watchers time and again in the Museum where I had gone to look at the Yunnan jades I had made it possible for rich old Rockbilt to put there with distinct increase to his reputation as a philanthropist; it had come to me in the theater and while riding in the Park; in the brokers’ offices where I myself had watched the money the jades had brought me melt swiftly away in a game which I now ruefully admitted I knew less than nothing about. I had felt it in the streets, and that was to be expected. But I had also felt it at the Club, and that was not to be expected and it bothered me more than anything else.

Yes, I was under strictest surveillance. But why?

That was what this night I had determined to find out.

At a touch upon my shoulder, I jumped, and swept my hand halfway up to the little automatic under my left armpit. By that, suddenly I realized how badly the mystery had gotten on my nerves. I turned, and grinned a bit sheepishly into the face of big Lars Thorwaldsen, back in New York only a few days from his two years in the Antarctic.

“Nothing like it, Lars,” I answered. “Too much city, I guess. Too much continual noise and motion. And too many people,” I added with a real candor he could not suspect.

“God!” he exclaimed. “It all looks good to me. I’m eating it up–after those two years. But I suppose in a month or two I’ll be feeling the same way about it. I hear you’re going away again soon. Where this time? Back to China?”

I shook my head. I did not feel like telling Lars that my destination was entirely controlled by whatever might turn up before I had spent the sixty-five dollars in my wallet and the seven quarters and two dimes in my pocket.

I shook my head. Everybody knew that old Rockbilt had been unusually generous about those infernal jades. I had my pride, and staggered though I was by that amazingly rapid melting away of a golden deposit I had confidently expected to grow into a barrier against care for the rest of my life, make me, as a matter of fact, independent of all chance, I did not feel like telling even Lars of my folly. Besides, I was not yet that hopeless of all things, a beachcomber in New York. Something would turn up.

“Wait,” he said, as some one called him back into the Club.

But I did not wait. Even less than baring my unfortunate gamble did I feel like telling about my watchers. I stepped down into the street.

Who was it that was watching me? And why? Some one from China who had followed after the treasure I had taken from the ancient tomb? I could not believe it. Kin-Wang, bandit though he might be, and accomplished graduate of American poker as well as of Cornell, would have sent no spies after me. Our, well–call it transaction, irregular as it had been, was finished in his mind when he had lost. Crooked as he might be with the cards, he was not the man to go back on his word. Of that I was sure. Besides, there had been no need of letting me get this far before striking. No, they were no emissaries of Kin-Wang.