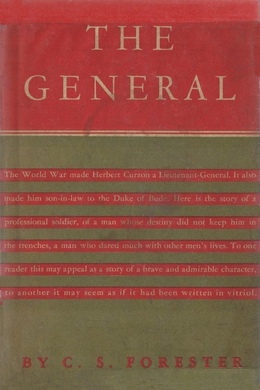 Herbert Curzon is a former cavalry officer who earned fortuitous distinction in the Boer War. He knew little then; he learned nothing since. But the army, desperate for officers in the opening months of WW I, hands Curzon, a new division to train. A few months later his formations dissolve at the Somme, hosed down by German machine guns. Uninstructed, Curzon still thinks himself a leader. When a German offensive threatens his remaining troops, he gallops suicidally into the fighting. He prefers death to self-knowledge

Nowadays Lieutenant-General Sir Herbert Curzon, K.C.M.G., C.B., D.S.O., is just one of Bournemouth’s seven generals, but with the distinction of his record and his social position as a Duke’s son-in-law, he is really far more eminent than those bare words would imply. He is usually to be seen in his bathchair with Lady Emily, tall, raw-boned, tweed-skirted, striding behind. He has a large face, which looks as if it had been rough-carved from a block of wood and his white hair and moustache stuck on afterwards, but there is a kindly gleam in his prominent blue eyes when he greets his acquaintances, and he purses up his lips in the queerest old-maidish smile. He clings to the habit of the old-fashioned bathchair largely for the reason that it is easier from a bathchair to acknowledge one’s friends; he has never taught himself to walk with ease with any of the half-dozen artificial limbs he has acquired since the war, and the stump of his amputated thigh still troubles him occasionally. Besides, now that he is growing old he is a tiny bit nervous in a motor-car.

Everybody is glad to have him smile to them on Bournemouth promenade, because his smile is a patent of social eminence in Bournemouth. And he wears his position with dignity, and is generous with his smiles, so that his popularity is great although he plays very bad bridge. He goes his way through the town, a plaid rug over his knees, the steering-handle in his gloved hands, and on his approach newcomers are hurriedly informed by residents about his brilliant career and his life of achievement. Nowadays, when the memory of the war is fading, these verbal accounts are growing like folk legends, and public opinion in Bournemouth is inclined to give Sir Herbert Curzon more credit than he has really earned, although perhaps not more than he deserves.

The day on which Curzon first stepped over the threshold of history, the day which was to start him towards the command of a hundred thousand men, towards knighthood—and towards the bathchair on Bournemouth promenade—found him as a worried subaltern in an early South African battle. The landscape all about him was of a dull reddish brown; even the scanty grass and the scrubby bushes were brown. The arid plain was seamed with a tangle of ravines and gullies, but its monotony was relieved by the elevation in the distance of half a dozen flat-topped rocky hills, each of them like the others, and all of them like nearly every other kopje in South Africa.

Curzon was in command of his squadron of the Twenty-second Lancers, the Duke of Suffolk’s Own, an eminence to which he had been raised by the chances of war. Three officers senior to him were sick, left behind at various points on the lines of communication, and Captain the Honourable Charles Manningtree-Field, who had been in command when the squadron went into action, was lying dead at Curzon’s feet with a Mauser bullet through his head. Curzon was not thinking about Manningtree-Field. His anxiety was such that immediately after the shock of his death, and of the realization that men really can be killed by bullets, his first thought had been that now he could use the captain’s Zeiss binoculars and try and find out what was happening. He stood on the lip of the shallow depression wherein lay Manningtree-Field’s body, the two squadron trumpeters, and two or three wounded men, and he stared round him across the featureless landscape.

In a long straggling line to his right and left lay the troopers of the squadron, their forage caps fastened under their chins, firing away industriously at nothing at all, as far as Curzon could see. In a gully to the rear, he knew, were the horses and the horseholders, but beyond that Curzon began to realize that he knew extraordinarily little about the battle which was going on. The squadron was supposed to be out on the right flank of an advancing British firing-line, but when they had come galloping up to this position Curzon had not been in command, and he had been so preoccupied with keeping his troop properly closed up that he had not paid sufficient attention to what Manningtree-Field had been doing.