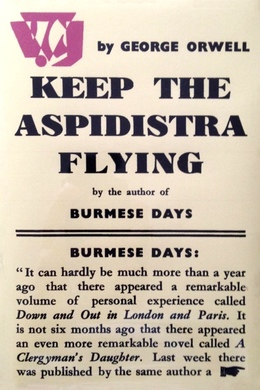 London, 1936. Gordon Comstock has declared war on the money god; and Gordon is losing the war. Nearly 30 and ‘rather moth-eaten already,’ a poet whose one small book of verse has fallen ‘flatter than any pancake,’ Gordon has given up a ‘good’ job and gone to work in a bookshop at half his former salary. Always broke, but too proud to accept charity, he rarely sees his few friends and cannot get the virginal Rosemary to bed because (or so he believes), ‘If you have no money … women won’t love you.’ On the windowsill of Gordon’s shabby rooming-house room is a sickly but unkillable aspidistra–a plant he abhors as the banner of the sort of ‘mingy, lower-middle-class decency’ he is fleeing in his downward flight. Orwell’s darkly compassionate satire to which anyone who has ever been oppressed by the lack of brass, or by the need to make it, will all too easily relate. He etches the ugly insanity of what Gordon calls ‘the money-world’ in unflinching detail, but the satire has a second edge, too, and Gordon himself is scarcely heroic. In the course of his misadventures, we become grindingly aware that his radical solution to the problem of the money-world is no solution at all–that in his desperate reaction against a monstrous system, he has become something of a monster himself. Orwell keeps both of his edges sharp to the very end–a ‘happy’ ending that poses tough questions about just how happy it really is. That the book itself is not sour, but constantly fresh and frequently funny, is the result of Orwell’s steady, unsentimental attention to the telling detail; his dry, quiet humor; his fascination with both the follies and the excellences of his characters; and his courageous refusal to embrace the comforts of any easy answer.

The clock struck half past two. In the little office at the back of Mr McKechnie’s bookshop, Gordon–Gordon Comstock, last member of the Comstock family, aged twenty-nine and rather moth-eaten already–lounged across the table, pushing a four-penny packet of Player’s Weights open and shut with his thumb.

The ding-dong of another, remoter clock–from the Prince of Wales, the other side of the street–rippled the stagnant air. Gordon made an effort, sat upright, and stowed his packet of cigarettes away in his inside pocket. He was perishing for a smoke. However, there were only four cigarettes left. Today was Wednesday and he had no money coming to him till Friday. It would be too bloody to be without tobacco tonight as well as all tomorrow.

Bored in advance by tomorrow’s tobaccoless hours, he got up and moved towards the door–a small frail figure, with delicate bones and fretful movements. His coat was out at elbow in the right sleeve and its middle button was missing; his ready-made flannel trousers were stained and shapeless. Even from above you could see that his shoes needed resoling.

The money clinked in his trouser pocket as he got up. He knew the precise sum that was there. Fivepence halfpenny–twopence halfpenny and a Joey. He paused, took out the miserable little threepenny-bit, and looked at it. Beastly, useless thing! And bloody fool to have taken it! It had happened yesterday, when he was buying cigarettes. ‘Don’t mind a threepenny-bit, do you, sir?’ the little bitch of a shop-girl had chirped. And of course he had let her give it him. ‘Oh no, not at all!’ he had said–fool, bloody fool!

His heart sickened to think that he had only fivepence halfpenny in the world, threepence of which couldn’t even be spent. Because how can you buy anything with a threepenny-bit? It isn’t a coin, it’s the answer to a riddle. You look such a fool when you take it out of your pocket, unless it’s in among a whole handful of other coins. ‘How much?’ you say. ‘Threepence,’ the shop-girl says. And then you feel all round your pocket and fish out that absurd little thing, all by itself, sticking on the end of your finger like a tiddley-wink. The shop-girl sniffs. She spots immediately that it’s your last threepence in the world. You see her glance quickly at it–she’s wondering whether there’s a piece of Christmas pudding still sticking to it. And you stalk out with your nose in the air, and can’t ever go to that shop again. No! We won’t spend our Joey. Twopence halfpenny left–twopence halfpenny to last till Friday.

This was the lonely after-dinner hour, when few or no customers were to be expected. He was alone with seven thousand books. The small dark room, smelling of dust and decayed paper, that gave on the office, was filled to the brim with books, mostly aged and unsaleable. On the top shelves near the ceiling the quarto volumes of extinct encyclopedias slumbered on their sides in piles like the tiered coffins in common graves. Gordon pushed aside the blue, dust-sodden curtains that served as a doorway to the next room. This, better lighted than the other, contained the lending library. It was one of those ‘twopenny no-deposit’ libraries beloved of book-pinchers. No books in it except novels, of course. And WHAT novels! But that too was a matter of course.

Eight hundred strong, the novels lined the room on three sides ceiling-high, row upon row of gaudy oblong backs, as though the walls had been built of many-coloured bricks laid upright. They were arranged alphabetically. Arlen, Burroughs, Deeping, Dell, Frankau, Galsworthy, Gibbs, Priestley, Sapper, Walpole. Gordon eyed them with inert hatred. At this moment he hated all books, and novels most of all. Horrible to think of all that soggy, half- baked trash massed together in one place. Pudding, suet pudding. Eight hundred slabs of pudding, walling him in–a vault of puddingstone. The thought was oppressive. He moved on through the open doorway into the front part of the shop. In doing so, he smoothed his hair. It was an habitual movement. After all, there might be girls outside the glass door. Gordon was not impressive to look at. He was just five feet seven inches high, and because his hair was usually too long he gave the impression that his head was a little too big for his body. He was never quite unconscious of his small stature. When he knew that anyone was looking at him he carried himself very upright, throwing a chest, with a you-be- damned air which occasionally deceived simple people.