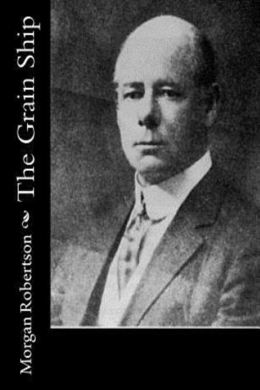 This anthology contains the strangest nautical tales. These are not your typical ghost stories; rather, they walk the line between science, the supernatural, and the bizarre. These stories have everything from invisible sea monsters to rabies-infected crews turning the ship into a blood bath, odd twins, and sea-worshipping Pagan captains. Rifts in time and space and even real life mysteries grace these pages. Contents: The Grain Ship, From the Darkness and the Depths, Noah’s Ark, The Finishing Touch, The Rock, The Argonauts, The Married Man, The Triple Alliance, Shovels and Bricks, Extracts from Noah’s Logs.

I could not help listening to the talk at the next table, because the orchestra was quiet and the conversation unrestrained; then, too, a nautical phrasing caught my ear and aroused my attention. For I had been a lifelong student of nautical matters. A side glance showed me the speaker, a white-haired, sunburned old fellow in immaculate evening dress. With him at the table in the restaurant were other similarly clad men, evidently of good station in life, and in their answers and comments these men addressed the white-haired man as Commodore. A navy captain, I thought, promoted on retirement. His talk bore it out.

“Yes, sirree,” he said, as he thumped the table mildly. “A good, tight merchant ship, with nothing wrong except what might be ascribed to neglect such as light canvas blown away and ropes cast off the pins, with no signs of fire, leak, or conflict to drive the crew out, with plenty of grub in the stores and plenty of water in the tanks. Yet, there she was, under topsails and topgallant-sails, rolling along before a Biscay sea, and deserted, except that the deck was almost covered with dead rats.”

“What killed them, Commodore,” asked one; “and what happened to the crew?”

“Nobody knows. It might have been a poisonous gas from the cargo, but if so it didn’t affect us after we boarded her. The log-book was gone, so we got no information from that. Moreover, every boat was in its chocks or under its own davits. It was as though some mysterious power had come down from above and wiped out the crew, besides killing the rats in the hold. She was a grain ship from ‘Frisco, and grain ships are full of rats.

“I was the prize-lieutenant that took her into Queenstown. She was condemned in Admiralty proceedings and, later, restored to her owners. But to this day no man has told the story of that voyage. It is thirty years and more since then, but it will remain one of the unexplained mysteries of the sea.”

The party left the table a little later, and left me, an ex-sailor, in a condition of mind not due to the story I had heard from the Commodore. There was something else roused into activity–something indefinite, intangible, elusive, like the sense of recognition that comes to you when you view a new scene that you know you have never seen before. It was nothing pertaining to myself or my adventures; and I had never heard of a ship being found deserted with all boats in place. It was something I must have heard at some time and place that bore no relation to the sea and its mysteries. It tormented me; I worried myself into insomnia that night, thinking about it, but at last fell asleep, and awakened in the morning with a memory twenty-five years old.

It is a long stretch of time and space from that gilded restaurant of that night to the arid plans of Arizona, and back through the years of work and struggle and development to the condition of a sailor on shore beating his way, horseback and afoot, across the country from the Gulf to the Pacific. But in my sleep I traversed it, and, lying on my back in the morning, puffing at my first pipe, I lived again my experience with the half-witted tramp whom I had entertained in my camp and who changed his soul in my presence.

I was a line-rider for a cattle company, and as it was before the days of wire fences, my work was to ride out each day along my boundary and separate the company’s cattle from those of its neighbor, a rival company. It was near the end of the day, when I was almost back to camp, that I saw him coming along the road, with the peculiar swing to his shoulders and arms that, once acquired, never leaves the deep-water sailor; so I had no hesitancy in greeting him after the manner of seamen.

“Well, mate, how are you heading?” I inquired, as I leaned over the saddle.

“Say, pardner,” he said, in a soft, whining voice, “kin you tell me where a feller might git a bite to eat around here?”

“Well,” I answered, “yes and no. I thought you were a sailorman.” Only his seamanly roll had appealed to me. His face, though bearded, tanned, and of strong, hard lines, seemed weak and crafty. He was tall, and strongly built–the kind of man who impresses you at first sight as accustomed to sudden effort of mind and body; yet he cringed under my stare, even as I added, “Yes, I’ll feed you.” I had noticed a blue foul anchor tattooed on his wrist.

“Come along, old man,” I said, kindly. “You’re traveling for your health. I’ll ask no fool questions and say nothing about you. My camp is just around that hill.”