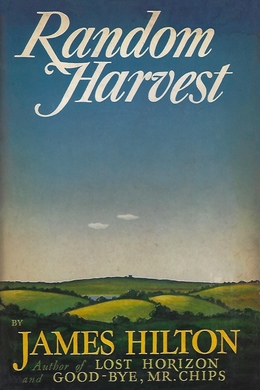 A veteran’s comfortable life is upended when long-buried memories of his time in the trenches of World War I come rushing back Charles Rainier’s family feared him lost along with so many of Britain’s youth during the First World War. But two years after he was reported MIA, he appears in a Liverpool hospital with no memory of his missing years. Even after marriage and a life of relative success, he can’t recall his time on the battlefield—until the first bombs of the Second World War begin to fall. Suddenly, his memories flood back. Recollections of a violent battlefield, a German prison, and a passionate affair all threaten to fracture the peaceful life he has worked so hard to create. Random Harvest is a moving account of the trauma of war and the courage required to find redemption in the face of the most overwhelming circumstances.

On the morning of the eleventh of November, 1937, precisely at eleven o’clock, some well-meaning busybody consulted his watch and loudly announced the hour, with the result that all of us in the dining-car felt constrained to put aside drinks and newspapers and spend the two minutes’ silence in rather embarrassed stares at one another or out of the window. Not that anyone had intended disrespect–merely that in a fast-moving train we knew no rules for correct behaviour and would therefore rather not have behaved at all. Anyhow, it was during those tense uneasy seconds that I first took notice of the man opposite. Dark-haired, slim, and austerely good-looking, he was perhaps in his early or middle forties; he wore an air of prosperous distinction that fitted well with his neat but quiet standardized clothes. I could not guess whether he had originally moved in from a third- or a first-class compartment. Half a million Englishmen are like that. Their inconspicuous correctness makes almost a display of concealment.

As he looked out of the window I saw something happen to his eyes– a change from a glance to a gaze and then from a gaze to a glare, a sudden sharpening of focus, as when a person thinks he recognizes someone fleetingly in a crowd. Meanwhile a lurch of the train spilt coffee on the table between us, providing an excuse for apologies as soon as the two minutes were over; I got in with mine first, but by the time he turned to reply the focus was lost, his look of recognition unsure. Only the embarrassment remained, and to ease it I made some comment on the moorland scenery, which was indeed sombrely beautiful that morning, for overnight snow lay on the summits, and there was one of them, twin-domed, that seemed to keep pace with the train, moving over the intervening valley like a ghostly camel. “That’s Mickle,” I said, pointing to it.

Surprisingly he answered: “Do you know if there’s a lake–quite a small lake–between the peaks?”

Two men at the table across the aisle then intervened with the instant garrulousness of those who overhear a question put to someone else. They were also, I think, moved by a common desire to talk down an emotional crisis, for the entire dining-car seemed suddenly full of chatter. One said there WAS such a lake, if you called it a lake, but it was really more of a swamp; and the other said there wasn’t any kind of lake at all, though after heavy rain it might be “a bit soggy” up there, and then the first man agreed that maybe that was so, and presently it turned out that though they were both Derbyshire men, neither had actually climbed Mickle since boyhood.

We listened politely to all this and thanked them, glad to let the matter drop. Nothing more was said till they left the train at Leicester; then I leaned across the table and said: “It doesn’t pay to argue with local inhabitants, otherwise I’d have answered your question myself–because I was on top of Mickle yesterday.”

A gleam reappeared in his eyes. “YOU were?”

“Yes, I’m one of those eccentric people who climb mountains for fun all the year round.”

“There wasn’t a lake or a swamp or a sign of either.”

“Well, no–hardly that. Maybe I was thinking of somewhere else. I’m afraid I’ve a bad memory.”

“For names too. MICKLE, did you say it was?” He spoke the word as if he were trying the sound of it.

“That’s the local name. It isn’t important enough to be on maps.”

He nodded and then, rather deliberately, held up a newspaper throughout a couple of English counties. The sight of soldiers marching along a Bedfordshire lane gave us our next exchange of remarks–something about Hitler, the European situation, chances of war, and so on. It led to my asking if he had served in the last war.

“Then there must be things you wish you HAD forgotten?”

“But I have–even THEM–to some extent.” He added as if to deflect the subject from himself: “I imagine you were too young?”

“Too young for the last, but not for the next, the way things are going.”

“Nobody will be either too young or too old for the next.”

Meanwhile men’s voices were uprising further along the car in talk of Ypres and Gallipoli; I called his attention and commented that thousands of other Englishmen were doubtless at that moment reminiscing about their war experiences. “If you’ve already forgotten yours, you’re probably lucky.”

“I didn’t say I’d forgotten EVERYTHING.”