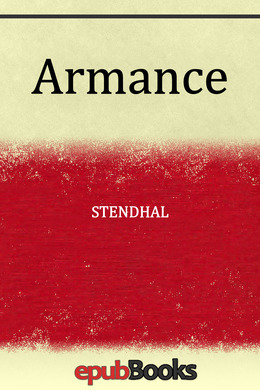 Some scenes from a salon in Paris in 1827

Stendhal’s first novel is a romance novel set during the Bourbon Restoration and published anonymously in 1827. Octave de Malivert, a taciturn but brilliant young man barely out of the Ecole Polytechnique is attracted to Armance Zohiloff, who shares his feelings. The novel describes how a series of misunderstandings have kept the lovers Armance and Octave divided. Moreover, a series of clues suggest that Octave is impotent as a result of a severe accident. Octave is experiencing a deep inner turmoil; he himself illustrates the pain of the century’s romantics. When the pair do eventually marry, the slanders of a rival convince Octave that Armance had married only out of selfishness. André Gide regarded this novel as the best of Stendhal’s novels, whom he was grateful to for having created a helpless lover, even if he reproached him for having eluded the fate of this love: ‘I can hardly convince myself that Armance, as painted for us by Stendhal, would have been suited by it.’ In Umberto Eco’s novel The Prague Cemetery, the protagonist Simone Simonini pleads with another character, Yuliana Glinka, that he suffers the same fate as Stendhal’s Octave de Malivert - whose readers had long speculated about – and thus can’t pursue the offer she had made him.

On his twentieth birthday, Octave had just left the École Polytechnique. His father, the Marquis de Malivert, wished to keep his only son in Paris. As soon as Octave understood that this was the constant desire of a father whom he respected, and of his mother whom he loved with an almost passionate love, he abandoned his intention of entering the Artillery. He would have liked to spend a few years in a regiment, and then resign his commission until the next war, in which he was equally ready to serve as Lieutenant or with the rank of Colonel. This is typical of the eccentricities which made him odious to the common run of humanity.

Plenty of brains, a tall figure, refined manners, the handsomest great dark eyes in the world, would have assured Octave a place among the most distinguished young men in society, had not a certain sombre air, imprinted in those gentle eyes, led people to pity rather than to envy him. He would have created a sensation had he been in the habit of talking; but Octave desired nothing, nothing appeared to cause him either pain or pleasure. Frequently ill in his childhood, ever since vital energy had assumed control of his organism he had always been observed to submit without hesitation to what seemed to him to be prescribed by duty; but it might have been thought that, if Duty had not made her voice heard, he would not have had, in himself, sufficient impulse to make him act. Perhaps some singular principle, deeply impressed upon his youthful heart, and incompatible with the events of real life, as he saw them develop round about him, led him to portray to himself in too sombre colours both his own future and his relations with his fellow men. Whatever the cause of his profound melancholy, Octave seemed to have turned misanthrope before his time. Commander de Soubirane, his uncle, said one day in his presence that the boy’s nature alarmed him. “Why should I appear other than what I am?” was Octave’s cold reply. “Your nephew will always keep to the line of reason.” “But never rise above or fall below it,” retorted the Commander with his Provençal vivacity; “from which I conclude that if you are not the Messiah expected by the Hebrews, you are Lucifer in person, come back to this world on purpose to worry me. What the devil are you? I can’t make you out; you are duty incarnate.” “How happy I should be never to fail in my duty!” said Octave; “how I wish I could render up my soul pure to my Creator, as I received it from Him!” “A miracle!” exclaimed the Commander; “in the last twelvemonth, this is the first wish I have seen spring from a heart frozen stiff with purity.” And in order not to spoil the effect of this utterance, the Commander hastily left the room.

Octave looked tenderly at his mother; she knew whether his heart was indeed frozen. It might be said of Madame de Malivert that she had remained young although approaching her fiftieth birthday. It was not only that she was still beautiful; she had, together with an exceptionally sharp intellect, retained a keen and active sympathv with her friends’ interests, including the joys and sorrows of young men. She entered naturally into their reasons for hope or fear; and soon seemed to be hoping or fearing herself. This kind of character has lost its charm now that public opinion seems to have made it almost obligatory upon women of a certain age who are not religious; but there was never the least trace of affectation in Madame de Malivert.

Her servants had observed for some time past that she was in the habit of driving out in a hackney carriage; and often, when she came home, she was not alone. Saint-Jean, an inquisitive old footman, who had accompanied his employers during the emigration, tried to discover who a certain man was whom Madame de Malivert had more than once brought home with her. On the first occasion, Saint-Jean lost sight of the stranger in the crowd; at his second attempt, his curiosity was more successful; he saw the person whom he was following pass into the Charity Hospital, where he learned from the porter that the stranger was none other than the famous Doctor Duquerrel. Madame de Malivert’s household discovered that their mistress was bringing to the house in turn all the most eminent doctors in Paris, and almost always she found an excuse for letting them see her son.