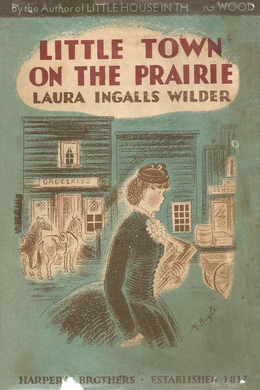 Little Town on the Prairie

The young town of De Smet has survived the long, harsh winter of 1880-1881. With the arrival of spring comes invitations to socials, parties, and “_literaries.-” Laura, who is now fifteen years old, attends her first evening social. In her spare time, she sews shirts to help earn money to send Mary to a college for the blind. Laura also receives her teaching certificate and can work at a school. And, best of all, Almanzo Wilder asks permission to being walking her home from church. Life in the little town certainly is exciting!

One evening at supper, Pa asked, “How would you like to work in town, Laura?” Laura could not say a word. Neither could any of the others. They all sat as if they were frozen. Grace’s blue eyes stared over the rim of her tin cup, Carrie’s teeth stayed bitten into a slice of bread, and Mary’s hand held her fork stopped in the air. Ma let tea go pouring from the teapot’s spout into Pa’s brimming cup. Just in time, she quickly set down the teapot.

“What did you say, Charles?” she asked.

“I asked Laura how she’d like to take a job in town,” Pa replied.

“A job? For a girl? In town?” Ma said. “Why, what kind of a job—” Then quickly she said, “No, Charles, I won’t have Laura working out in a hotel among all kinds of strangers.”

“Who said such a thing?” Pa demanded. “No girl of ours’ll do that, not while I’m alive and kicking.”

“Of course not,” Ma apologized. “You took me so by surprise. What other kind of work can there be? and Laura not old enough to teach school yet.”

All in the minute before Pa began to explain, Laura thought of the town, and of the homestead claim where they were all so busy and happy now in the springtime, and she did not want anything changed. She did not want to work in town.

After the October Blizzard last fall, they had all moved to town and for a little while Laura had gone to school there. Then the storms had stopped school, and all through that long winter the blizzards had howled between the houses, shutting them off from each other so that day after day and night after night not a voice could be heard and not a light could be seen through the whirling snow.

All winter long, they had been crowded in the little kitchen, cold and hungry and working hard in the dark and the cold to twist enough hay to keep the fire going and to grind wheat in the coffee mill for the day’s bread.

All that long, long winter, the only hope had been that sometime winter must end, sometime blizzards must stop, the sun would shine warm again and they could all get away from the town and go back to the homestead claim.

Now it was springtime. The Dakota prairie lay so warm and bright under the shining sun that it did not seem possible that it had ever been swept by the winds and snows of that hard winter. How wonderful it was, to be on the claim again! Laura wanted nothing more than just being outdoors. She felt she never could get enough sunshine soaked into her bones.

In the dawns when she went to the well at the edge of the slough to fetch the morning pail of fresh water, the sun was rising in a glory of colors. Meadow larks were flying, singing, up from the dew-wet grass. Jack rabbits hopped beside the path, their bright eyes watching and their long ears twitching as they daintily nibbled their breakfast of tender grass tips.

Laura was in the shanty only long enough to set down the water and snatch the milk pail. She ran out to the slope where Ellen, the cow, was cropping the sweet young grass. Quietly Ellen stood chewing her cud while Laura milked.

Warm and sweet, the scent of new milk came up from the streams hissing into the rising foam, and it mixed with the scents of springtime. Laura’s bare feet were wet and cool in the dewy grass, the sunshine was warm on her neck, and Ellen’s flank was warmer against her cheek. On its own little picket rope, Ellen’s baby calf bawled anxiously, and Ellen answered with a soothing moo.

When Laura had stripped the last creamy drops of milk, she lugged the pail to the shanty. Ma poured some of the warm new milk into the calf’s pail. The rest she strained through a clean white cloth into tin milk pans, and Laura carefully carried them down cellar while Ma skimmed thick cream from last night’s milk. Then she poured the skimmed milk into the calf’s pail, and Laura carried it to the hungry calf.

Teaching the calf to drink was not easy, but always interesting. The wobbly-legged baby calf had been born believing that it must butt hard with its little red poll, to get milk. So when it smelled the milk in the pail, it tried to butt the pail.

Laura must keep it from spilling the milk, if she could, and she had to teach it how to drink, because it didn’t know. She dipped her fingers into the milk and let the calf’s rough tongue suck them, and gently she led its nose down to the milk in the pail. The calf suddenly snorted milk into its nose, sneezed it out with a whoosh that splashed milk out of the pail, and then with all its might it butted into the milk. It butted so hard that Laura almost lost hold of the pail. A wave of milk went over the calf’s head and a splash wet the front of Laura’s dress.

So, patiently she began again, dipping her fingers for the calf to suck, trying to keep the milk in the pail and to teach the calf to drink it. In the end, some of the milk was inside the calf.