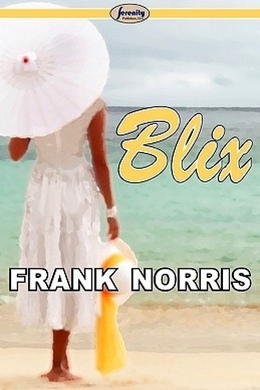 This short romance was based on Norris’s courtship of his wife. It features a San Francisco journalist, Condy Rivers, who falls in love with the daughter of a wealthy family that believes him to be very much beneath her. Willa Cather praised the novel as ‘all wheat and no chaff’.

It had just struck nine from the cuckoo clock that hung over the mantelpiece in the dining-room, when Victorine brought in the halved watermelon and set it in front of Mr. Bessemer’s plate. Then she went down to the front door for the damp, twisted roll of the Sunday morning’s paper, and came back and rang the breakfast-bell for the second time.

As the family still hesitated to appear, she went to the bay window at the end of the room, and stood there for a moment looking out. The view was wonderful. The Bessemers lived upon the Washington Street hill, almost at its very summit, in a flat in the third story of the building. The contractor had been clever enough to reverse the position of kitchen and dining-room, so that the latter room was at the rear of the house. From its window one could command a sweep of San Francisco Bay and the Contra Costa shore, from Mount Diablo, along past Oakland, Berkeley, Sausalito, and Mount Tamalpais, out to the Golden Gate, the Presidio, the ocean, and even–on very clear days–to the Farrallone islands.

For some time Victorine stood looking down at the great expanse of land and sea, then faced about with an impatient exclamation.

On Sundays all the week-day regime of the family was deranged, and breakfast was a movable feast, to be had any time after seven or before half-past nine. As Victorine was pouring the ice-water, Mr. Bessemer himself came in, and addressed himself at once to his meal, without so much as a thought of waiting for the others.

He was a little round man. He wore a skull-cap to keep his bald spot warm, and read his paper through a reading-glass. The expression of his face, wrinkled and bearded, the eyes shadowed by enormous gray eyebrows, was that of an amiable gorilla.

Bessemer was one of those men who seem entirely disassociated from their families. Only on rare and intense occasions did his paternal spirit or instincts assert themselves. At table he talked but little. Though devotedly fond of his eldest daughter, she was a puzzle and a stranger to him. His interests and hers were absolutely dissimilar. The children he seldom spoke to but to reprove; while Howard, the son, the ten-year-old and terrible infant of the household, he always referred to as “that boy.”

He was an abstracted, self-centred old man, with but two hobbies–homoeopathy and the mechanism of clocks. But he had a strange way of talking to himself in a low voice, keeping up a running, half-whispered comment upon his own doings and actions; as, for instance, upon this occasion: “Nine o’clock–the clock’s a little fast. I think I’ll wind my watch. No, I’ve forgotten my watch. Watermelon this morning, eh? Where’s a knife? I’ll have a little salt. Victorine’s forgot the spoons–ha, here’s a spoon! No, it’s a knife I want.”

After he had finished his watermelon, and while Victorine was pouring his coffee, the two children came in, scrambling to their places, and drumming on the table with their knife-handles.

The son and heir, Howard, was very much a boy. He played baseball too well to be a very good boy, and for the sake of his own self-respect maintained an attitude of perpetual revolt against his older sister, who, as much as possible, took the place of the mother, long since dead. Under her supervision, Howard blacked his own shoes every morning before breakfast, changed his underclothes twice a week, and was dissuaded from playing with the dentist’s son who lived three doors below and who had St. Vitus’ dance.

His little sister was much more tractable. She had been christened Alberta, and was called Snooky. She promised to be pretty when she grew up, but was at this time in that distressing transitional stage between twelve and fifteen; was long-legged, and endowed with all the awkwardness of a colt. Her shoes were still innocent of heels; but on those occasions when she was allowed to wear her tiny first pair of corsets she was exalted to an almost celestial pitch of silent ecstasy. The clasp of the miniature stays around her small body was like the embrace of a little lover, and awoke in her ideas that were as vague, as immature and unformed as the straight little figure itself.

When Snooky and Howard had seated themselves, but one chair–at the end of the breakfast-table, opposite Mr. Bessemer–remained vacant.

“Is your sister–is Miss Travis going to have her breakfast now? Is she got up yet?” inquired Victorine of Howard and Snooky, as she pushed the cream pitcher out of Howard’s reach. It was significant of Mr. Bessemer’s relations with his family that Victorine did not address her question to him.