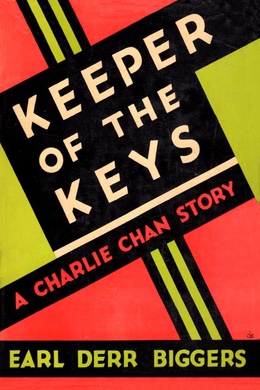 Keeper of the Keys

In the 6th and final book in the mystery series featuring the Chinese-American detective Charlie Chan, we find our hero in Lake Tahoe, California. Chan has been invited as a house guest. He meets a glamorous Out of Printera singer, Ellen Landini, and she is murdered by a gunshot during a party. Her servants and four of her ex-husbands are suspects in the case, all with weak alibis. It is up to Chan to solve the murder. The clues are cryptic and misleading by nature: the singer’s own revolver, two scarves, two cigarette boxes with mismatched lids, and the actions of a little dog named Trouble. Part of the solution to the mystery involves an elderly Chinese servant named Ah Sing–the keeper of the keys. Chan solves the case in his usual understated, spectacular fashion.

The train had left Sacramento some distance behind, and was now bravely beginning the long climb that led to the high Sierras and the town of Truckee. Little patches of snow sparkled in the late afternoon sun along the way, and far ahead snow-capped peaks suddenly stood out against the pale sky of a reluctant spring.

Two conductors, traveling together as though for safety, came down the aisle and paused at section seven. “Tickets on at Sacramento,” demanded the leader. The occupant of the section, a pretty blonde girl who seemed no more than twenty, handed him the small green slips. He glanced at them, then passed one to his companion. “Seat in Seven,” he said loudly. “Reno.”

“Reno,” echoed the Pullman conductor, in an even louder tone.

They passed on, leaving the blonde girl staring about the car with an air that was a mixture of timidity and defiance. This was the first time, since she had left home the day before, that she had been so openly tagged with the name of her destination. All up and down the car, strange faces turned and looked at her with casual curiosity. Some smiled knowingly; others were merely cold and aloof. The general public in one of its ruder moments.

One passenger only showed no interest. Across the aisle, in section eight, the girl noted the broad shoulders and back of a man in a dark suit. He was sitting close to the window, staring out, and even from this rear view it was apparent that he was deeply engrossed with his own affairs. The young woman who was bound for Reno felt somehow rather grateful toward him.

Presently he turned, and the girl understood, for she saw that he was a Chinese. A race that minds its own business. An admirable race. This member of it was plump and middle-aged. His little black eyes were shining as from some inner excitement; his lips were parted in a smile that seemed to indicate a sudden immense delight. Without so much as a glance toward number seven, he rose and walked rapidly down the car.

Arrived on the front platform of the Pullman, he stood for a moment deeply inhaling the chilly air. Then again, as though irresistibly, he was drawn to the window. The train was climbing more slowly now; the landscape, wherever he looked, was white. Presently he was conscious of some one standing behind him, and turned. The train maid, a Chinese girl of whose guarded glances he had been conscious at intervals all afternoon, was gazing solemnly up at him.

“How do you do,” the man remarked, “and thank you so much. You have arrived at most opportune moment. The need to speak words assails me with unbearable force. I must release flood of enthusiasm or burst. For at this moment I am seeing snow for the first time!”

“Oh–I am so glad!” answered the girl. It was an odd reply, but the plump Chinese was evidently too excited to notice that.

“You see, it is this way,” he continued eagerly. “All my life I can remember only nodding palm-trees, the trade winds of the tropics, surf tumbling on coral beach—-“

He paused, and stared at her. “Perhaps you have seen Hawaii too?” he inquired.

She shook her head. “No. Me–I am born in San Francisco. But I read advertisements in magazines–and besides—-“

“You are bright girl,” the man cut in, “and your deduction is eminently correct. Honolulu has been my home for many years. Once, it is true, I saw California before, and from flat floor of desert I beheld, far in distance, mountain snow. But that was all same dream. Now I am moving on into veritable snow country, the substance lies on ground all about, soon I shall plunge unaccustomed feet into its delicious cold. I shall intake great breaths of frigidair.” He sighed. “Life is plenty good,” he added.

“Some people,” said the girl, “find the snow boresome.”

“And some, no doubt, consider the stars a blemish on the sky. But you and I, we are not so insensible to the beauties of the world. We delight to travel–to find novelty and change. Is it not so?”

“Ah–you should visit my islands. Do not think that in my ecstasy of raving I forget the charm of my own land. I have daughter same age as you–how happy she would be to act as your guide. She would show you Honolulu, the flowering trees, the—-“

The big man started slightly and stared at her. “I perceive that I am known,” he remarked.

“Naturally,” the girl smiled. “For many years you have been newspaper hero for me. I was small child at the time, but I read with panting interest when you carried Phillimore pearls on flat floor of desert. Again, when you captured killer of famous Scotland Yard man in San Francisco, I perused daily accounts breathlessly. And only three weeks ago you arrived in San Francisco with one more cruel murderer in your firm grasp.”

“But even so,” he shrugged.

“Your pictures were in all the papers. Have you forgot?”