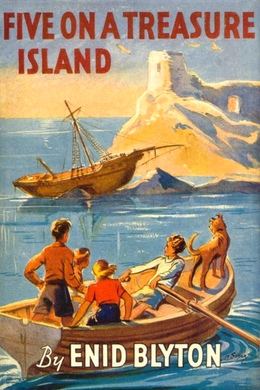 Five on a Treasure Island

Julian, Dick and Anne are thrilled when they learn they will be spending the summer holidays with their cousin in a cottage beside the sea! George is a strange girl, and though at first she isn’t pleased to have company, she – and her dog Timmy – have the adventure of their lives.\n\nThe Famous Five find a shipwreck off Kirrin Island. But where is the treasure? They are on the trail, looking for clues, but they’re not alone. Someone else has got the same idea! Time is running out for the Famous Five - who will follow the clues and get to the treasure first?

“Mother, have you heard about our summer holidays yet?” said Julian, at the breakfast-table. “Can we go to Polseath as usual?”

“I’m afraid not,” said his mother. “They are quite full up this year.”

The three children at the breakfast-table looked at one another in great disappointment. They did so love the house at Polseath. The beach was so lovely there, too, and the bathing was fine.

“Cheer up,” said Daddy. “I dare say we’ll find somewhere else just as good for you. And anyway, Mother and I won’t be able to go with you this year. Has Mother told you?”

“No!” said Anne. “Oh, Mother—is it true? Can’t you really come with us on our holidays? You always do.”

“Well, this time Daddy wants me to go to Scotland with him,” said Mother. “All by ourselves! And as you are really getting big enough to look after yourselves now, we thought it would be rather fun for you to have a holiday on your own too. But now that you can’t go to Polseath, I don’t really quite know where to send you.”

“What about Quentin’s?” suddenly said Daddy. Quentin was his brother, the children’s uncle. They had only seen him once, and had been rather frightened of him. He was a very tall, frowning man, a clever scientist who spent all his time studying. He lived by the sea—but that was about all that the children knew of him!

“Quentin?” said Mother, pursing her lips. “Whatever made you think of him? I shouldn’t think he’d want the children messing about in his little house.”

“Well,” said Daddy, “I had to see Quentin’s wife in town the other day, about a business matter—and I don’t think things are going too well for them. Fanny said that she would be quite glad if she could hear of one or two people to live with her for a while, to bring a little money in. Their house is by the sea, you know. It might be just the thing for the children. Fanny is very nice—she would look after them well.”

“Yes—and she has a child of her own too, hasn’t she?” said the children’s mother. “Let me see—what’s her name—something funny—yes, Georgina! How old would she be? About eleven, I should think.”

“Same age as me,” said Dick. “Fancy having a cousin we”ve never seen! She must be jolly lonely all by herself. I’ve got Julian and Anne to play with—but Georgina is just one on her own. I should think she’d be glad to see us.”

“Well, your Aunt Fanny said that her Georgina would love a bit of company,” said Daddy. “You know, I really think that would solve our difficulty, if we telephone to Fanny and arrange for the children to go there. It would help Fanny, I’m sure, and Georgina would love to have someone to play with in the holidays. And we should know that our three were safe.”

The children began to feel rather excited. It would be fun to go to a place they had never been to before, and stay with an unknown cousin.

“Are there cliffs and rocks and sands there?” asked Anne. “Is it a nice place?”

“I don’t remember it very well,” said Daddy. “But I feel sure it’s an exciting kind of place. Anyway, you’ll love it! It’s called Kirrin Bay. Your Aunt Fanny has lived there all her life, and wouldn’t leave it for anything.”

“Oh Daddy, do telephone to Aunt Fanny and ask her if we can go there!” cried Dick. “I just feel as if it’s the right place somehow. It sounds sort of adventurous!”

“Oh, you always say that, wherever you go!” said Daddy, with a laugh. “All right—I’ll ring up now, and see if there’s any chance.”

They had all finished their breakfast, and they got up to wait for Daddy to telephone. He went out into the hall, and they heard him dialling.

“I hope it’s all right for us!” said Julian. “I wonder what Georgina’s like. Funny name, isn’t it? More like a boy’s than a girl’s. So she’s eleven—a year younger than I am—same age as you, Dick—and a year older than you, Anne. She ought to fit in with us all right. The four of us ought to have a fine time together.”

Daddy came back in about ten minutes” time, and the children knew at once that he had fixed up everything. He smiled round at them.

“Well, that’s settled,” he said. “Your Aunt Fanny is delighted about it. She says it will be awfully good for Georgina to have company, because she’s such a lonely little girl, always going off by herself. And she will love looking after you all. Only you’ll have to be careful not to disturb your Uncle Quentin. He is working very hard, and he isn’t very good-tempered when he is disturbed.”

“We’ll be as quiet as mice in the house!” said Dick.

“Honestly we will. Oh, goody, goody—when are we going, Daddy?”

“Next week, if Mother can manage it,” said Daddy.

Mother nodded her head. “Yes,” she said, “there’s nothing much to get ready for them—just bathing suits and jerseys and jeans. They all wear the same.”

“How lovely it will be to wear jeans again,” said Anne, dancing round. “I’m tired of wearing school tunics. I want to wear shorts, or a bathing suit, and go bathing and climbing with the boys.”