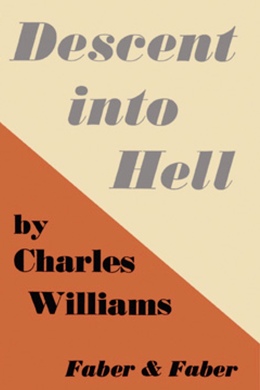 Descent deals with various forms of selfishness, and how the cycle of sin brings about the necessity for redemptive acts. In it, an academic becomes so far removed from the world that he fetishizes a woman to the extent that his perversion takes the form of a succubus. Characters include a doppelgänger and the ghost of a suicidal Victorian builder. It is illustrative of Williams’s belief in the replacement of sin and substitutional love.

“It undoubtedly needs,” Peter Stanhope said, “a final pulling together, but there’s hardly time for that before July, and if you’re willing to take it as it is, why—-“ He made a gesture of presentation and dropped his eyes, thus missing the hasty reciprocal gesture of gratitude with which Mrs. Parry immediately replied on behalf of the dramatic culture of Battle Hill. Behind and beyond her the culture, some thirty faces, unessentially exhibited to each other by the May sunlight, settled to attention–naturally, efficiently, critically, solemnly, reverently. The grounds of the Manor House expanded beyond them; the universal sky sustained the whole. Peter Stanhope began to read his play.

Battle Hill was one of the new estates which had been laid out after the war. It lay about thirty miles north of London and took its title from the more ancient name of the broad rise of ground which it covered. It had a quiet ostentation of comfort and culture. The poor, who had created it, had been as far as possible excluded, nor (except as hired servants) were they permitted to experience the bitterness of others’ stairs. The civil wars which existed there, however bitter, were conducted with all bourgeois propriety. Politics, religion, art, science, grouped themselves, and courteously competed for numbers and reputation. This summer, however, had seen a spectacular triumph of drama, for it had become known that Peter Stanhope had consented to allow the restless talent of the Hill to produce his latest play.

He was undoubtedly the most famous inhabitant. He was a cadet of that family which had owned the Manor House, and he had bought it back from more recent occupiers, and himself settled in it before the war. He had been able to do this because he was something more than a cadet of good family, being also a poet in the direct English line, and so much after the style of his greatest predecessor that he made money out of poetry. His name was admired by his contemporaries and respected by the young. He had even imposed modern plays in verse on the London theatre, and two of them tragedies at that, with a farce or two, and histories for variation and pleasure. He was the kind of figure who might be more profitable to his neighbourhood dead than alive; dead, he would have given it a shrine; alive, he deprecated worshippers. The young men at the estate office made a refined publicity out of his privacy; the name of Peter Stanhope would be whispered without comment. He endured the growing invasion with a great deal of good humour, and was content to see the hill of his birth become a suburb of the City, as in another sense it would always be. There was, in that latest poetry, no contention between the presences of life and of death; so little indeed that there had been a contention in the Sunday Times whether Stanhope were a pessimist or an optimist. He himself said, in reply to an interviewer’s question, that he was an optimist and hated it.

Stanhope, though the most glorious, was not the only notorious figure of the Hill. There was Mr. Lawrence Wentworth, who was the most distinguished living authority on military history (perhaps excepting Mr. Aston Moffatt). Mr. Wentworth was not in the garden on that afternoon. Mrs. Catherine Parry was; it was she who would produce the play, as in many places and at many times she had produced others. She sat near Stanhope now, almost as tall as he, and with more active though not brighter eyes. They were part of that presence which was so necessary to her profession. Capacity which, in her nature, had reached the extreme of active life, seemed in him to have entered the contemplative, so much had his art become a thing of his soul. Where, in their own separate private affairs, he interfered so little as almost to seem inefficient, she was so efficient as almost to seem interfering.