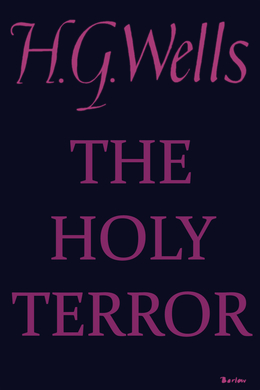 Presenting itself as a biography of Rudolf “Rud” Whitlow, who is born with such an aggressive temperament that scarcely is he born but his monthly nurse exclaims: “It’s a Holy Terror!” Rud Whitlow goes on to become the founder of the first world state, long a Wellsian dream.

The events take place in the recognizable recent English past, though it should be noted that Wells warns that “Every person, place and thing in this story—even the countries in which it happens—are fictitious…The England, the America, the London in this book are not the England, America and London of geography and journalism, but England, America, and London transposed into imaginative narrative.”

“It’s a Holy Terror,” said Betsy Barnacle, the monthly nurse. “I never heard such a baby. Scream and scream it does. And its little fists!”

“There ain’t nothing wrong with it?” asked cook.

“Only it’s a little Turk,” said Betsy. “Goes stiff it does and if you tried to stop it, there’d be convulsions. Hark at it now! You’d think it would rupture itself.”

The two women listened judicially. Their eyes met in a common wonder.

“I shouldn’t have thought its father had it in him,” said cook.

The baby grew into an incessantly active, bilious little boy with a large white face, a slight scowl and the devil of a temper. He was a natural born kicker; he went straight for the shins. He was also a wrist-twister, but he bit very little. On the other hand he was a great smasher of the cherished possessions of those who annoyed him, and particularly the possessions of his brothers Samuel and Alf. He seemed to have been born with the idea of “serving people out.” He wept very little, but when he wept he howled aloud, and jabbered wild abuse, threats and recriminations through the wet torrent of his howling. The neighbours heard him. Old gentlemen stopped and turned round to look at him in the street.

By the time he was seven or eight quite a number of people had asked: “What can you do with a boy like that?” Nobody had found a satisfactory solution to the problem. Many suggestions were made, from “Knock his little block off,” to “Give him more love.”

Nowadays many people deny that the unpleasantness of unpleasant children comes naturally. They say they are love-starved. His Aunt Julia, for example, did. “You think so,” said his mother, and did not argue about it, because at times she was very doubtful indeed whether she did love him. She was for a mother unusually clear-headed. She was affectionate but she was critical. And what to do with him she did not know.

His name was Rudolf, not perhaps the wisest name to give a child, which shortened naturally into Rudie, but which after he had heard of the existence and world-wide fame of Mr. Kipling he insisted upon shortening further and improperly–since it altered the vowel sound–into “Rud.” He was also called Young Whitlow, Whitlow Tertius, Wittles and Drink, Wittles and Stink, Grub and simply The Stink. He objected strenuously to the last and always attempted the murder of anyone not too obviously an outsize who used it. It referred to some early accident in his career which he desired to have forgotten.

His relations with his brothers were strained. Samuel was inclined to mock and tease him–a perilous joy. He threw a dinner-knife across the table at Samuel and nicked a bit off the top of his ear. Samuel had either taken an overdose of mustard or, as Rud declared, twisted his nose in such a way as to imply “Stink.” The subsequent enquiry never settled this. The ear bled copiously into Mrs. Whitlow’s handkerchief and nobody could imagine what would have happened if the knife had gone four inches straighter. “Might have blinded me,” accused Samuel, from under Mother’s arm. “Might have cut my eye clean out.” It was a tremendous scene and Mr. Whitlow, who disliked the job extremely, took little Rudie upstairs and spanked him, calling him “You little Devil!” between each smack, and left him in the bedroom.

“He’s always teasing me. He drives me wild,” said Rudie.

“He won’t do it again,” said Rudie, smearing his wet, dirty, woeful face and nose with the back of his dirty little hand. “Your own brother!”

Later he threw a large, wooden toy-horse at Alf and missed him and smashed the parlour window. “Your father will beat you again!” cried mother in distress. “Say you were playing catch with him, Alfie!”

“I didn’t catch the horse,” brother Alf prevaricated stoutly to Father, and the beating was averted.

But little Rudie never thanked Alfred for that. He never thought very much of Alfred.

He stole his brothers’ things, he played with their things and broke them and they had no remedy–for you cannot sneak on a younger brother and they were forbidden to take the law into their own hands. All three of the boys drew and painted. Alf’s work was the more delicate and he copied meticulously, but Rudie’s had a sort of splashing originality. When Alf took a bright and careful bit of illumination to school the drawing master praised it in front of the whole classroom, and he had never once had a word of praise for Rudie’s frequent and hasty performances. So Rudie got hold of and tore up Alf’s masterpiece and, when the master wanted to exhibit it again, the story came out and Rudie was reproached by the master before everybody. He went home with a bursting heart and scribbled all over a number of pages in Alf’s favourite book.