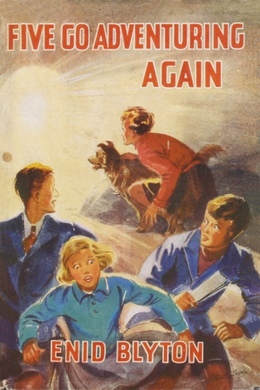 There’s a thief at Kirrin Cottage! The Famous Five think they know who it is, but they need to prove it! Where can they find evidence? The discovery of an old map and very unusual hiding place is all they need to get to the bottom of this mystery and uncover the true culprit!

It was the last week of the Christmas term, and all the girls at Gaylands School were looking forward to the Christmas holidays. Anne sat down at the breakfast-table and picked up a letter addressed to her.

“Hallo, look at this!” she said to her cousin Georgina, who was sitting beside her. “A letter from Daddy—and I only had one from him and Mummy yesterday.”

“I hope it’s not bad news,” said George. She would not allow anyone to call her Georgina, and now even the mistresses called her George. She really was very like a boy with her short curly hair, and her boyish ways. She looked anxiously at Anne as her cousin read the letter.

“Oh, George—we can’t go home for the holidays!” said Anne, with tears in her eyes. “Mummy’s got scarlet fever—and Daddy is in quarantine for it—so they can’t have us back. Isn’t it just too bad?”

“Oh, I am sorry,” said George. She was just as disappointed for herself as for Anne, because Anne’s mother had invited George, and her dog Timothy, to stay for the Christmas holidays with them. She had been promised many things she had never seen before—the pantomime, and the circus—and a big party with a fine Christmas tree! Now it wouldn’t happen.

“Whatever will the two boys say?” said Anne, thinking of Julian and Dick, her two brothers. “They won’t be able to go home either.”

“Well—what are you going to do for the holidays then?” asked George. “Won’t you come and stay at Kirrin Cottage with me? I’m sure my mother would love to have you again. We had such fun when you came to stay for the summer holls.”

“Wait a minute—let me finish the letter and see what Daddy says,” said Anne, picking up the note again. “Poor Mummy—I do hope she isn’t feeling very ill.”

She read a few more lines and then gave such a delighted exclamation that George and the other girls waited impatiently for her to explain.

“George! We are to come to you again—but oh blow, blow, blow!—we’ve got to have a tutor for the holls, partly to look after us so that your mother doesn’t have too much bother with us, and partly because both Julian and Dick have been ill with ‘flu twice this term, and have got behind in their work.”

“A tutor! How sickening! That means I’ll have to do lessons too, I’ll bet!” said George, in dismay. “When my mother and father see my report I guess they’ll find out how little I know. After all, this is the first time I’ve ever been to a proper school, and there are heaps of things I don’t know.”

“What horrid holls they’ll be, if we have a tutor running after us all the time,” said Anne, gloomily. “I expect I’ll have quite a good report, because I’ve done well in the exams—but it won’t be any fun for me not doing lessons with you three in the holls. Though, of course, I could go off with Timothy, I suppose. He won’t be doing lessons!”

“Yes, he will,” said George, at once. She could not bear the idea of her beloved dog Timothy going off each morning with Anne, whilst she, George, sat and worked hard with Julian and Dick.

“He can sit under my feet whilst I’m doing them,” said George. “It will be a great help to feel him there. For goodness’ sake eat up your sausages, Anne. We’ve all nearly finished. The bell will go in a minute and you won’t have had any breakfast.”

“I am glad Mummy isn’t very bad,” said Anne, hurriedly finishing her letter. “Daddy says he’s written to Dick and Julian—and to your father to ask him to engage a tutor for us. Oh dash—this is an awful disappointment, isn’t it? I don’t mean I shan’t enjoy going to Kirrin Cottage again—and seeing Kirrin Island—but after all there are no pantomimes or circuses or parties to look forward to at Kirrin.”

The end of the term came quickly. Anne and George packed up their trunks, and put on the labels, enjoying the noise and excitement of the last two days. The big school coaches rolled up to the door, and the girls clambered in.

“Off to Kirrin again!” said Anne. “Come on, Timothy darling, you can sit between me and George.”

Gaylands School allowed the children to keep their own pets, and Timothy, George’s big mongrel dog, had been a great success. Except for the time when he had run after the dustman, and dragged the dustbin away from him, all the way up the school grounds and into George’s classroom, he had really behaved extremely well.

“I’m sure you’ll have a good report, Tim,” said George, giving the dog a hug. “We’re going home again. Will you like that?”

“Woof,” said Tim, in his deep voice. He stood up, wagging his tail, and there was a squeal from the seat behind.

“George! Make Tim sit down. He’s wagging my hat off!”

It was not very long before the two girls and Timothy were in London, being put into the train for Kirrin.

“I do wish the boys broke up to-day too,” sighed Anne. “Then we could all have gone down to Kirrin together. That would have been fun.”