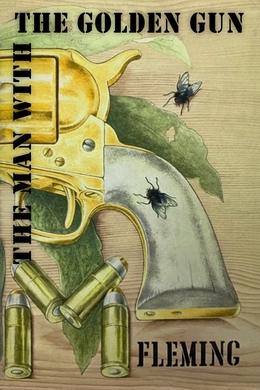 The Man With the Golden Gun

The Man with the Golden Gun, Paco Scaramanga, is one of the deadliest hit men in the world and the British Secret Service want him eliminated. A brainwashed James Bond tried, and failed, to kill his boss, M. It’s time for him to prove he can be trusted again. Bond finds his man in the sweltering heat of Jamaica. His plan is to infiltrate Scaramanga’s gang of criminals to get close to the man himself. But if he fails, Bond will be the next target for the golden gun.

The Secret Service holds much that is kept secret even from very senior officers in the organization. Only M. and his Chief of Staff know absolutely everything there is to know. The latter is responsible for keeping the Top Secret record known as The War Book so that, in the event of the death of both of them, the whole story, apart from what is available to individual Sections and Stations, would be available to their successors.

One thing that James Bond, for instance, didn’t know was the machinery at Headquarters for dealing with the public, whether friendly or otherwise—drunks, lunatics, bona fide applications to join the Service, and enemy agents with plans for penetration or even assassination.

On that cold, clear morning in November he was to see the careful cogwheels in motion.

The girl at the switchboard at the Ministry of Defence flicked the switch to HOLD and said to her neighbour, “It’s another nut who says he’s James Bond. Even knows his code number. Says he wants to speak to M. personally.”

The senior girl shrugged. The switchboard had had quite a few such calls since, a year before, James Bond’s death on a mission to Japan had been announced in the press. There had even been one pestiferous woman who, at every full moon, passed on messages from Bond on Uranus, where it seemed he had got stuck while awaiting entry into heaven. She said, “Put him through to Liaison, Pat.”

The Liaison Section was the first cog in the machine, the first sieve. The operator got back on the line: “Just a moment, sir. I’ll put you on to an officer who may be able to help you.”

James Bond, sitting on the edge of his bed, said, “Thank you.”

He had expected some delay before he could establish his identity. He had been warned to expect it by the charming “Colonel Boris” who had been in charge of him for the past few months after he had finished his treatment in the luxurious Institute on the Nevsky Prospekt in Leningrad. A man’s voice came on the line. “Captain Walker speaking. Can I help you?”

James Bond spoke slowly and clearly. “This is Commander James Bond speaking. Number 007. Would you put me through to M., or his secretary, Miss Moneypenny. I want to make an appointment.”

Captain Walker pressed two buttons on the side of his telephone. One of them switched on a tape recorder for the use of his department, the other alerted one of the duty officers in the Action Room of the Special Branch at Scotland Yard that he should listen to the conversation, trace the call, and at once put a tail on the caller. It was now up to Captain Walker, who was in fact an extremely bright ex-prisoner-of-war interrogator from Military Intelligence, to keep the subject talking for as near five minutes as possible. He said, “I’m afraid I don’t know either of these two people. Are you sure you’ve got the right number?”

James Bond patiently repeated the Regent number which was the main outside line for the Secret Service. Together with so much else, he had forgotten it, but Colonel Boris had known it and had made him write it down among the small print on the front page of his forged British passport that said his name was Frank Westmacott, company director.

“Yes,” said Captain Walker sympathetically. “We seem to have got that part of it right. But I’m afraid I can’t place these people you want to talk to. Who exactly are they? This Mr. Em, for instance. I don’t think we’ve got anyone of that name at the Ministry.”

“Do you want me to spell it out? You realize this is an open line?”

Captain Walker was rather impressed by the confidence in the speaker’s voice. He pressed another button, and, so that Bond would hear it, a telephone bell rang. He said, “Hang on a moment, would you? There’s someone on my other line.” Captain Walker got on to the head of his Section. “Sorry, sir. I’ve got a chap on who says he’s James Bond and wants to talk to M. I know it sounds crazy and I’ve gone through the usual motions with the Special Branch and so on, but would you mind listening for a minute? Thank you, sir.”

Two rooms away a harassed man, who was the Chief Security Officer for the Secret Service, said “Blast!” and pressed a switch. A microphone on his desk came to life. The Chief Security Officer sat very still. He badly needed a cigarette, but his room was now live to Captain Walker and to the lunatic who called himself “James Bond.” Captain Walker’s voice came over at full strength. “I’m so sorry. Now then. This man Mr. Em you want to talk to. I’m sure we needn’t worry about security. Could you be more specific?”