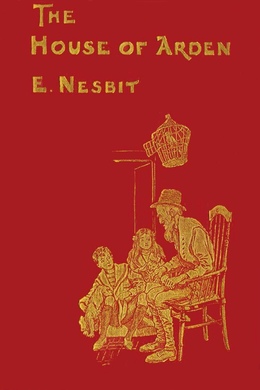 The House Of Arden

The famous Arden family treasure has been missing for generations, and the last members of the Arden line, Edred, Elfrida, and their Aunt Edith, have nothing to their names but the crumbling castle they live in. Just before his tenth birthday, Edred inherits the title of Lord Arden; he also learns that the missing fortune will be his if-and only if-he can find it before the turns ten. With no time to lose, Edred and Elfrida secure the help of a magical talking creature, the temperamental Mouldiwarp, who leads them on a treasure hunt through the ages. Together, brother and sister visit some of the most thrilling periods of history and test their wits against real witches, highwaymen, and renegades. They find plenty of adventure, but will they find the treasure before Edred’s birthday?

It had been a great house once, with farms and fields, money and jewels–with tenants and squires and men-at-arms. The head of the house had ridden out three days’ journey to meet King Henry at the boundary of his estate, and the King had ridden back with him to lie in the tall State bed in the castle guest-chamber. The heir of the house had led his following against Cromwell; younger sons of the house had fought in foreign lands, to the honour of England and the gilding and regilding with the perishable gold of glory of the old Arden name. There had been Ardens in Saxon times, and there were Ardens still–but few and impoverished. The lands were gone, and the squires and men-at-arms; the castle itself was roofless, and its unglazed windows stared blankly across the fields of strangers, that stretched right up to the foot of its grey, weather-worn walls. And of the male Ardens there were now known two only–an old man and a child.

The old man was Lord Arden, the head of the house, and he lived lonely in a little house built of the fallen stones that Time and Cromwell’s round-shot had cast from the castle walls. The child was Edred Arden, and he lived in a house in a clean, wind-swept town on a cliff.

It was a bright-faced house with bow-windows and a green balcony that looked out over the sparkling sea. It had three neat white steps and a brass knocker, pale and smooth with constant rubbing. It was a pretty house, and it would have been a pleasant house but for one thing–the lodgers. For I cannot conceal from you any longer that Edred Arden lived with his aunt, and that his aunt let lodgings. Letting lodgings is one of the most unpleasant of all possible ways of earning your living, and I advise you to try every other honest way of earning your living before you take to that.

Because people who go to the seaside and take lodgings seem, somehow, much harder to please than the people who go to hotels. They want ever so much more waiting on; they want so many meals, and at such odd times. They ring the bell almost all day long. They bring in sand from the shore in every fold of their clothes, and it shakes out of them on to the carpets and the sofa cushions, and everything in the house. They hang long streamers of wet seaweed against the pretty roses of the new wall-papers, and their washhand basins are always full of sea anemones and shells. Also, they are noisy; their boots seem to be always on the stairs, no matter how bad a headache you may have; and when you give them their bill they always think it is too much, no matter how little it may be. So do not let lodgings if you can help it.

Miss Arden could not help it. It happened like this.

Edred and his sister were at school. (Did I tell you that he had a sister? Well, he had, and her name was Elfrida.) Miss Arden lived near the school, so that she could see the children often. She was getting her clothes ready for her wedding, and the gentleman who was going to marry her was coming home from South America, where he had made a fortune. The children’s father was coming home from South America, too, with the fortune that he had made, for he and Miss Arden’s sweetheart were partners. The children and their aunt talked whenever they met of the glorious time that was coming, and how, when father and Uncle Jim–they called him Uncle Jim already–came home, they were all going to live in the country and be happy ever after.

And then the news came that father and Uncle Jim had been captured by brigands, and all the money was lost, too, and there was nothing left but the house on the cliff. So Miss Arden took the children from the expensive school in London, and they all went to live in the cliff house, and as there was no money to live on, and no other way of making money to live on except letting lodgings, Miss Arden let them, like the brave lady she was, and did it well. And then came the news that father and Uncle Jim were dead, and for a time the light of life went out in Cliff House.

This was two years ago; but the children had never got used to the lodgers. They hated them. At first they had tried to be friendly with the lodgers’ children, but they soon found that the lodgers’ children considered Edred and Elfrida very much beneath them, and looked down on them accordingly. And very often the lodgers’ children were the sort of children on whom anybody might have looked down, if it were right and kind to look down on any one. And when Master Reginald Potts, of Peckham, puts his tongue out at you on the parade and says, right before everybody, “Lodgings! Yah!” it is hard to feel quite the same to him as you did before.

When there were lodgers–and there nearly always were, for the house was comfortable, and people who had been once came again–the children and their aunt had to live in the very top and the very bottom of the house–in the attics and the basement, in fact.