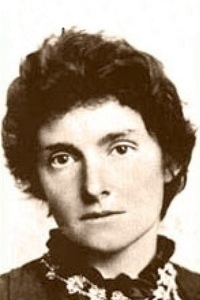 Edith Nesbit was an English author and poet whose children’s works were published under the name of E. Nesbit. She wrote or collaborated on over 60 books of fiction for children, several of which have been adapted for film and television. She was also a political activist and co-founded the Fabian Society, a precursor to the modern Labour Party. Among Nesbit’s best-known books are The Story of the Treasure Seekers and The Wouldbegoods, which both recount stories about the Bastables, a middle class family that has fallen on relatively hard times. Her children’s writing also included numerous plays and collections of verse.

She created an innovative body of work that combined realistic, contemporary children in real-world settings with magical objects and adventures and sometimes travel to fantastic worlds. In doing so, she was a direct or indirect influence on many subsequent writers, including P. L. Travers (author of Mary Poppins), Edward Eager, Diana Wynne Jones and J. K. Rowling. C. S. Lewis wrote of her influence on his Narnia series and mentions the Bastable children in The Magician’s Nephew. (source: Wikipedia)

To Cyril, Anthea, Robert, Jane, and their baby brother, the house in the country promises a summer of freedom and play. But when they accidently uncover...read more »

As if the remarkable collections of children’s adventures The Story of the Treasure Seekers and The Wouldbegoods weren’t enough! Nesbit’s third book of ...read more »

In The Book of Dragons, E. Nesbit tells eight humorous and imaginative fairy tales about dragons set in modern England or fairy tale kingdoms, all with ...read more »

Three children discover an old country estate during their school holidays. When they’re exploring it they come upon a mysterious young girl claiming to...read more »

The famous Arden family treasure has been missing for generations, and the last members of the Arden line, Edred, Elfrida, and their Aunt Edith, have no...read more »

The incredible honeymoon is a story about a man who feels the nothing ever happens to him, and that adventures are things in story books. That is until ...read more »

When young Philip Haldane builds a play city out of odds and ends, the fantastic creation comes to life, and he and new stepsister Lucy are magically tr...read more »

A thoughtless boy learns a lesson from his cat; a magic telescope brings two boys a fortune; a crow, a cat, a fish, all whisk away disgraced children to...read more »

The four children acquired the magic carpet when they found a special fire egg – it hatched in their nursery fireplace. The phoenix came from the egg, a...read more »

Roberta, Peter, and Phyllis were very happy living in a comfortable house surrounded by a cook and servants and two loving parents, until one evening wh...read more »

There were once four children who had the good fortune to find in the sandpit a strange creature. Its eyes were on long horns like snail’s eyes, and it ...read more »

The Story of the Treasure Seekers (1899)

This is the story of the different ways we looked for treasure, and I think when you have read it you will see that we were not lazy about the looking. ...read more »

Sent away to the country after a particularly unruly episode, the well-meaning but wayward Bastable children solemnly vow to reform their behavior. But ...read more »