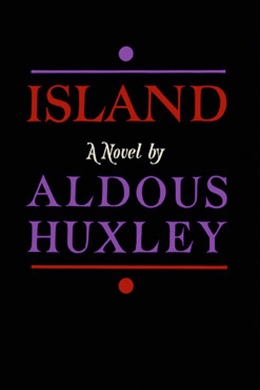 For over a hundred years the Pacific island of Pala has been the scene of a unique experiment in civilisation. Its inhabitants live in a society where western science has been brought together with eastern philosophy and humanism to create a paradise on earth. When cynical journalist, Will Farnaby, arrives to search for information about potential oil reserves on Pala, he quickly falls in love with the way of life on the island. Soon the need to complete his mission becomes an intolerable burden. In counterpoint to Brave New World and Ape and Essence, in Island Huxley gives us his vision of utopia.

“Attention,” a voice began to call, and it was as though an oboe had suddenly become articulate. “Attention,” it repeated in the same high, nasal monotone. “Attention.”

Lying there like a corpse in the dead leaves, his hair matted, his face grotesquely smudged and bruised, his clothes in rags and muddy, Will Farnaby awoke with a start. Molly had called him. Time to get up. Time to get dressed. Mustn’t be late at the office.

“Thank you, darling,” he said and sat up. A sharp pain stabbed at his right knee and there were other kinds of pain in his back, his arms, his forehead.

“Attention,” the voice insisted without the slightest change of tone. Leaning on one elbow, Will looked about him and saw with bewilderment, not the grey wallpaper and yellow curtains of his London bedroom, but a glade among trees and the long shadows and slanting lights of early morning in a forest.

Why did she say, “Attention”?

The name seemed to open a window inside his head. Suddenly, with that horribly familiar sense of guilt at the pit of the stomach, he smelt formaldehyde, he saw the small brisk nurse hurrying ahead of him along the green corridor, heard the dry creaking of her starched clothes. “Number fifty-five,” she was saying, and then halted, opened a white door. He entered and there, on a high white bed, was Molly. Molly with bandages covering half her face and the mouth hanging cavernously open. “Molly,” he had called, “Molly … ” His voice had broken, and he was crying, was imploring now, “My darling!” There was no answer. Through the gaping mouth the quick shallow breaths came noisily, again, again. “My darling, my darling … ” And then suddenly the hand he was holding came to life for a moment. Then was still again.

Once more the fingers stirred. Slowly, with what was evidently an enormous effort, they closed themselves over his own, pressed them for a moment and then relaxed again into lifelessness.

It had been an accident, he hastened to assure himself. The road was wet, the car had skidded across the white line. It was one of those things that happen all the time. The papers are full of them; he had reported them by the dozen. “Mother and three children killed in head-on crash … ” But that was beside the point. The point was that, when she asked him if it was really the end, he had said yes; the point was that less than an hour after she had walked out from that last shameful interview into the rain, Molly was in the ambulance, dying.

He hadn’t looked at her as she turned to go, hadn’t dared to look at her. Another glimpse of that pale suffering face might have been too much for him. She had risen from her chair and was moving slowly across the room, moving slowly out of his life. Shouldn’t he call her back, ask her forgiveness, tell her that he still loved her? Had he ever loved her?

For the hundredth time the articulate oboe called him to attention.

Yes, had he ever really loved her?

“Good-bye, Will,” came her remembered whisper as she turned back on the threshold. And then it was she who had said it—in a whisper, from the depths of her heart. “I still love you, Will—in spite of everything.”

A moment later the door of the flat closed behind her almost without a sound. The little dry click of the latch, and she was gone.