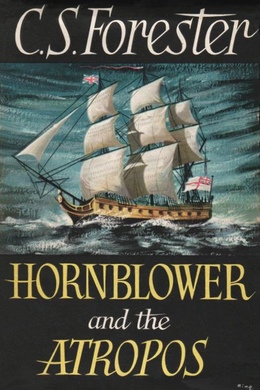 Hornblower and the Atropos

January 1808, Hornblower is called upon to act as a bargeman while traveling with his wife and baby son to London where he is to take command of the Atropos. Skippering the flagship for Nelson’s funeral on the Thames is not Hornblower’s idea of thrilling action. But soon his orders come, and he sets sail for the Mediterranean. ‘Battle, storm, shipwreck, disease - what were the chances that he would never come back again?’

Having climbed up through the locks, the canal boat was now winding over the pleasant Cotswold country. Hornblower was bubbling with good spirits, on his way to take up a new command, seeing new sights, travelling in an entirely new way, at a moment when the entirely unpredictable English weather had decided to stage a clear sunny day in the middle of December. This was a delightful way of travelling, despite the cold.

‘Your pardon for a moment, ma’am,’ said Hornblower.

Maria, with the sleeping little Horatio in her arms, gave a sigh at her husband’s restlessness and shifted her knees to allow him passage, and he rose under the restricted height of the first-class cabin and stepped out through the forward door into the open bow of the passage-boat. Here he could stand on his sea chest and look round him. It was a queer craft, fully seventy feet long and, judging by eye as he looked aft, he would think hardly five feet in beam–the same proportions as had the crazy dugout canoes he had seen in use in the West Indies. Her draught must be less than a foot; that was clear as she tore along behind the cantering horses at a speed that must certainly be all of eight knots–nine miles an hour he told himself, hurriedly, for that was the way they measured speeds here inland.

The passage-boat was making her way from Gloucester to London along the Thames and Severn Canal; going far more smoothly than the stage coach, it was very nearly as fast and decidedly cheaper, at a penny a mile, even in the first class. He and Maria, with the child, were the only first-class passengers, and the boatman, when Hornblower had paid the fares, had cocked an eye at Maria’s condition and had said that by rights they ought to pay two children’s fares instead of one. Maria had snorted with disdain at such vulgarity, while the onlookers chuckled.

Standing on his sea chest, Hornblower could look over the canal banks, at the grey stone boundary walls and the grey stone farms. The rhythmic sound of the hoofs of the cantering tow horses accentuated the smoothness of the travel; the boat itself made hardly a sound as it slid along over the surface of the water–Hornblower noticed that the boatmen had the trick of lifting the bows, by a sudden acceleration, on to the crest of the bow wave raised by her passage, and retaining them there. This reduced turbulence in the canal to a minimum; it was only when he looked aft that he could see, far back, the reeds at the banks bowing and straightening again long after they had gone by. It was this trick that made the fantastic speed possible. The cantering horses maintained their nine miles an hour, being changed every half hour. There were two towlines, attached to timber heads at bow and stern; one boatman rode as postillion on the rear horse, controlling the lead horse with shouts and the cracking of his whip. In the stern sat the other boatman, surly and with one hand missing and replaced by a hook; with the other he held the tiller and steered the boat round the curves with a skill that Hornblower admired.

A sudden ringing of the horses’ hoofs on stone warned Hornblower just in time. The horses were dashing, without any slackening of pace, under a low bridge, where the towpath, cramped between the water and the arch, gave them barely room to pass. The mounted boatman buried his face in his horse’s mane to pass under; Hornblower had just time to leap down from his sea chest and seat himself as the bridge hurried over him. Hornblower heard the helmsman’s loud laugh at his momentary discomfiture.

‘You learn to move fast in a canal boat, Captain,’ the steersman called to him from his place by the tiller. ‘Two dozen for the last man off the yard! None o’ that here on Cotswold, Captain, but a broken head for you if you don’t look lively.’

‘Don’t let that fellow be so rude to you, Horatio,’ said Maria from the cabin. ‘Can’t you stop him?’

‘Not so easy, dear,’ replied Hornblower. ‘It’s he who’s captain of this craft, and I’m only a passenger.’

‘Well, if you can’t stop him, come in here where he can’t be rude to you.’

Hornblower chose to risk the jeers of the boatman rather than miss looking round him; this was the best opportunity he had had of watching the working of the canals which in the last thirty years had changed the economic face of England. And not far ahead was Sapperton Tunnel, the engineering marvel of the age, the greatest achievement of the new science. He certainly wanted to see that. Let the steersman laugh his head off if he wanted to. He must be an old sailor, discharged as disabled by the loss of his hand. It must be a wonderful experience for him to have a naval captain under his command.