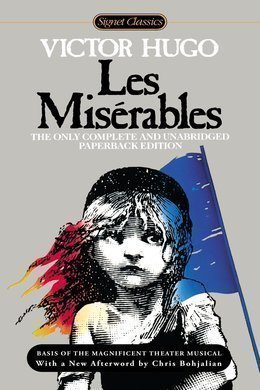 One of the most widely read novels of all time, Les Misérables was the crowning literary achievement of Victor Hugo’s stunning career. Though he was considered the greatest French writer of his day, Hugo was forced to flee the country because of his opposition to Napoleon III. While in exile he completed Les Misérables, an enormous melodrama set against the background of political upheaval in France following the rule of Napoleon I. Les Misérables tells the story of the peasant Jean Valjean—unjustly imprisoned, baffled by destiny, and hounded by his nemesis, the magnificently realized, ambiguously malevolent police detective Javert. As Valjean struggles to redeem his past, we are thrust into the teeming underworld of Paris with all its poverty, ignorance, and suffering. Just as cruel tyranny threatens to extinguish the last vestiges of hope, rebellion sweeps over the land like wildfire, igniting a vast struggle for the democratic ideal in France. A monumental classic dedicated to the oppressed, the underdog, the laborer, the rebel, the orphan, and the misunderstood, Les Miserables is a rich, emotional novel that captures nothing less than the entirety of life in nineteenth-century France.

In 1815, M. Charles-François-Bienvenu Myriel was Bishop of Digne He was an old man of about seventy-five years of age; he had occupied the see of Digne since 1806.

Although this detail has no connection whatever with the real substance of what we are about to relate, it will not be superfluous, if merely for the sake of exactness in all points, to mention here the various rumors and remarks which had been in circulation about him from the very moment when he arrived in the diocese. True or false, that which is said of men often occupies as important a place in their lives, and above all in their destinies, as that which they do. M. Myriel was the son of a councillor of the Parliament of Aix; hence he belonged to the nobility of the bar. It was said that his father, destining him to be the heir of his own post, had married him at a very early age, eighteen or twenty, in accordance with a custom which is rather widely prevalent in parliamentary families. In spite of this marriage, however, it was said that Charles Myriel created a great deal of talk. He was well formed, though rather short in stature, elegant, graceful, intelligent; the whole of the first portion of his life had been devoted to the world and to gallantry.

The Revolution came; events succeeded each other with precipitation; the parliamentary families, decimated, pursued, hunted down, were dispersed. M. Charles Myriel emigrated to Italy at the very beginning of the Revolution. There his wife died of a malady of the chest, from which she had long suffered. He had no children. What took place next in the fate of M. Myriel? The ruin of the French society of the olden days, the fall of his own family, the tragic spectacles of ‘93, which were, perhaps, even more alarming to the emigrants who viewed them from a distance, with the magnifying powers of terror,–did these cause the ideas of renunciation and solitude to germinate in him? Was he, in the midst of these distractions, these affections which absorbed his life, suddenly smitten with one of those mysterious and terrible blows which sometimes overwhelm, by striking to his heart, a man whom public catastrophes would not shake, by striking at his existence and his fortune? No one could have told: all that was known was, that when he returned from Italy he was a priest.

In 1804, M. Myriel was the Cure of Brignolles. He was already advanced in years, and lived in a very retired manner.

About the epoch of the coronation, some petty affair connected with his curacy–just what, is not precisely known–took him to Paris. Among other powerful persons to whom he went to solicit aid for his parishioners was M. le Cardinal Fesch. One day, when the Emperor had come to visit his uncle, the worthy Cure, who was waiting in the anteroom, found himself present when His Majesty passed. Napoleon, on finding himself observed with a certain curiosity by this old man, turned round and said abruptly:–

“Who is this good man who is staring at me?”

That very evening, the Emperor asked the Cardinal the name of the Cure, and some time afterwards M. Myriel was utterly astonished to learn that he had been appointed Bishop of Digne

What truth was there, after all, in the stories which were invented as to the early portion of M. Myriel’s life? No one knew. Very few families had been acquainted with the Myriel family before the Revolution.

M. Myriel had to undergo the fate of every newcomer in a little town, where there are many mouths which talk, and very few heads which think. He was obliged to undergo it although he was a bishop, and because he was a bishop. But after all, the rumors with which his name was connected were rumors only,–noise, sayings, words; less than words–palabres, as the energetic language of the South expresses it.

M. Myriel had arrived at Digne accompanied by an elderly spinster, Mademoiselle Baptistine, who was his sister, and ten years his junior.

Their only domestic was a female servant of the same age as Mademoiselle Baptistine, and named Madame Magloire, who, after having been the servant of M. le Cure, now assumed the double title of maid to Mademoiselle and housekeeper to Monseigneur.