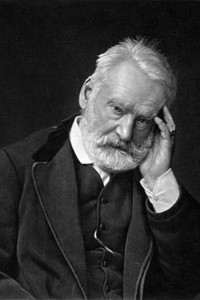 Victor-Marie Hugo was a French poet, playwright, novelist, essayist, visual artist, statesman, human rights activist and exponent of the Romantic movement in France. In France, Hugo’s literary fame rests not only upon his novels, but also upon his poetic and dramatic achievements. Among many volumes of poetry, Les Contemplations and La Légende des siècles stand particularly high in critical esteem, and Hugo is sometimes identified as the greatest French poet. Outside France, his best-known works are the novels Les Misérables and Notre-Dame de Paris (known in English also as The Hunchback of Notre Dame). Though a committed conservative royalist when he was young, Hugo grew more liberal as the decades passed; he became a passionate supporter of republicanism, and his work touches upon most of the political and social issues and artistic trends of his time. He is buried in the Panthéon. (source: Wikipedia)

Published in 1877, long after it was written, it is an account of the 1852 coup d’état that brought Napoleon into power and forced Hugo into an exile of...read more »

One of the most widely read novels of all time, Les Misérables was the crowning literary achievement of Victor Hugo’s stunning career. Though he was con...read more »

Napoleon the Little was an influential political pamphlet by Victor Hugo which condemned the reign of Napoleon III, Emperor of the French. Hugo lived in...read more »

Set in medieval Paris, Victor Hugo’s powerful historical romance The Hunchback of Notre-Dame has resonated with succeeding generations ever since its pu...read more »

Deeply shocking in its time, this is a profound and moving tale and a vital work of social commentary. A man vilified by society and condemned to death ...read more »

The Man Who Laughs is a romantic masterpiece of a man whose face has been disfigured into a laughing mask in childhood, the loyal blind girl who gives h...read more »

This is not a diary of events arranged in chronological order, nor is it a continuous autobiography. It is less and it is more, or rather, it is better ...read more »

Hugo’s story unfolds the life of a reclusive fisherman, Gilliat, who lives on the Isle of Guernsey, where Hugo himself was exiled for a large portion of...read more »