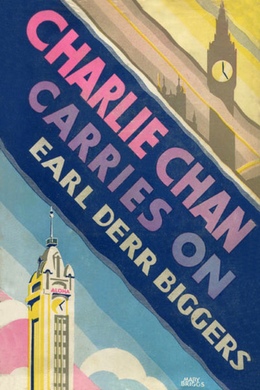 Inspector Duff, a Scotland Yard detective and friend of Chan’s, is pursuing a murderer on an around-the-world voyage; so far, there have been murders in London, France, Italy and Japan. While his ship is docked in Honolulu, the detective is shot and wounded by his quarry; though he survives, he is unable to continue with the cruise, and Chan takes his place instead.

Chief Inspector Duff, of Scotland Yard, was walking down Piccadilly in the rain. Faint and far away, beyond St. James’s Park, he had just heard Big Ben on the Houses of Parliament strike the hour of ten. It was the night of February 6, 1930. One must keep in mind the clock and the calendar where chief inspectors are concerned, although in this case the items are relatively unimportant. They will never appear as evidence in court.

Though naturally of a serene and even temperament, Inspector Duff was at the moment in a rather restless mood. Only that morning a long and tedious case had come to an end as he sat in court and watched the judge, in his ominous black cap, sentence an insignificant, sullen-looking little man to the scaffold. Well, that was that, Duff had thought. A cowardly murderer, with no conscience, no human feeling whatever. And what a merry chase he had led Scotland Yard before his final capture. But perseverance had won–that, and a bit of the Duff luck. Getting hold of a letter the murderer had written to the woman in Battersea Park Road, seeing at once the double meaning of a harmless little phrase, seizing upon it and holding on until he had the picture complete. That had done it. All over now. What next?

Duff moved on, his ulster wrapped close about him. Water dripped from the brim of his old felt hat. For the past three hours he had been sitting in the Marble Arch Pavilion, a cinema theater, hoping to be taken out of himself. The story had been photographed in the South Seas–palm-fringed shores, blazing skies, eternal sunshine. As he watched it Duff had thought of a fellow detective, encountered some years before in San Francisco. A modest chap who followed the profession of man-hunting against such a background. Studied clues where the trade-winds whispered in flowering trees and the month was always June. The inspector had smiled gently at the recollection.

With no definite destination in mind, Duff wandered along down Piccadilly. It was a thoroughfare of memories for him, and now they crowded about him. Up to a short time ago he had been divisional detective-inspector at the Vine Street station, and so in charge of the C. I. D. in this fashionable quarter. The West End had been his hunting preserve. There, looming in dignified splendor through the rain, was the exclusive club where, with a few quiet words, he had taken an absconding banker. A darkened shop front recalled that early morning when he had bent over the French woman, murdered among her Paris gowns. The white façade of the Berkeley brought memories of a cruel blackmailer seized, dazed and helpless, as he stepped from his bath. A few feet up Half Moon Street, before the tube station, Duff had whispered a word into a swarthy man’s ear, and seen his face go white. The debonair killer wanted so badly by the New York police had been at breakfast in his comfortable quarters at the Albany when Duff laid a hand on his shoulder. In Prince’s restaurant, across the way, the inspector had dined every night for two weeks, keeping a careful eye upon a man who thought that evening clothes concealed successfully the sordid secret in his heart. And here in Piccadilly Circus, to which he had now come, he had fought, one memorable midnight, a duel to the death with the diamond robbers of Hatton Garden.

The rain increased, lashing against him with a new fury. He stepped into a doorway and stared at the scene before him. London’s quiet and restrained version of a Great White Way. The yellow lights of innumerable electric signs blurred uncertainly in the downpour, little pools of water lay shining in the street. Feeling the need of companionship, Duff skirted the circle and disappeared down a darker thoroughfare. A bare two hundred yards from the lights and the traffic he came upon a grim building with iron bars at the ground floor windows and a faintly burning lamp before it. In another moment he was mounting the familiar steps of Vine Street Police Station.

Divisional Inspector Hayley, Duff’s successor at this important post, was alone in his room. A spare, weary-looking man, his face brightened at sight of an old friend.

“Glad to hear it,” Duff answered. He removed the dripping hat, the soggy ulster, and sat down. Through the open door into the next room he noted a group of detectives, each armed with a halfpenny paper. “Rather quiet evening, I take it?”

“Yes, thank heaven,” Hayley replied. “We’re raiding a night club a bit later–but that sort of thing, as you know, is our chief diversion nowadays. By the way, I see that congratulations are again in order.”