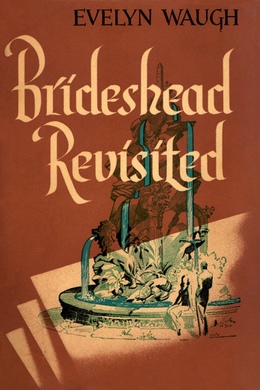 Charles Ryder, a lonely student at Oxford, is captivated by the outrageous and decadent Sebastian Flyte. Invited to Brideshead, Sebastian’s magnificent family home, Charles welcomes the attentions of its eccentric, artistic inhabitants the Marchmains, becoming infatuated with them and the life of privilege they inhabit – in particular, with Sebastian’s remote sister, Julia. But, as duty and desire, faith and happiness come into conflict, and the Marchmains struggle to find their place in a changing world, Charles eventually comes to recognize his spiritual and social distance from them.

“I have been here before,” I said; I had been there before; first with Sebastian more than twenty years ago on a cloudless day in June, when the ditches were white with fool’s-parsley and meadowsweet and the air heavy with all the scents of summer; it was a day of peculiar splendour, such as our climate affords once or twice a year, when leaf and flower and bird and sun-lit stone and shadow seem all to proclaim the glory of God; and though I had been there so often, in so many moods, it was to that first visit that my heart returned on this, my latest.

That day, too, I had come not knowing my destination. It was Eights Week. Oxford—submerged now and obliterated, irrecoverable as Lyonnesse, so quickly have the waters come flooding in—Oxford, in those days, was still a city of aquatint. In her spacious and quiet streets men walked and spoke as they had done in Newman’s day; her autumnal mists, her grey springtime, and the rare glory of her summer days—such as that day—when the chestnut was in flower and the bells rang out high and clear over her gables and cupolas, exhaled the soft vapours of a thousand years of learning. It was this cloistral hush which gave our laughter its resonance, and carried it still, joyously, over the intervening clamour. Here, discordantly, in Eights Week, came a rabble of womankind, some hundreds strong, twittering and fluttering over the cobbles and up the steps, sight-seeing and pleasure-seeking, drinking claret cup, eating cucumber sandwiches; pushed in punts about the river, herded in droves to the college barges; greeted in the Isis and in the Union by a sudden display of peculiar, facetious, wholly distressing Gilbert and Sullivan badinage, and by peculiar choral effects in the college chapels. Echoes of the intruders penetrated every corner, and in my own college was no echo, but an original fount of the grossest disturbance. We were giving a ball. The front quad, where I lived, was floored and tented; palms and azaleas were banked round the porter’s lodge; worst of all, the don who lived above me, a mouse of a man connected with the Natural Sciences, had lent his rooms for a Ladies’ Cloakroom, and a printed notice proclaiming this outrage hung not six inches from my oak.

No one felt more strongly about it than my scout.

“Gentlemen who haven’t got ladies are asked as far as possible to take their meals out in the next few days,” he announced despondently. “Will you be lunching in?”

“So as to give the servants a chance, they say. What a chance! I’ve got to buy a pin-cushion for the Ladies’ Cloakroom. What do they want with dancing? I don’t see the reason in it. There never was dancing before in Eights Week. Commem. now is another matter being in the vacation, but not in Eights Week as if teas and the river wasn’t enough. If you ask me, sir, it’s all on account of the war. It couldn’t have happened but for that.” For this was 1923 and for Lunt, as for thousands of others, things could never be the same as they had been in 1914. “Now wine in the evening,” he continued, as was his habit, half in and half out of the door, “or one or two gentlemen to luncheon, there’s reason in. But not dancing. It all came in with the men back from the war. They were too old and they didn’t know and they wouldn’t learn. That’s the truth. And there’s some even goes dancing with the town at the Masonic—but the proctors will get them, you see…. Well, here’s Lord Sebastian. I mustn’t stand here talking when there’s pin-cushions to get.”

Sebastian entered—dove-grey flannel, white crepe-de-chine, a Charvet tie, my tie as it happened, a pattern of postage stamps—“Charles, what in the world’s happening at your college? Is there a circus? I’ve seen everything except elephants. I must say the whole of Oxford has become most peculiar suddenly. Last night it was pullulating with women. You’re to come away at once, out of danger. I’ve got a motor-car and a basket of strawberries and a bottle of Château Peyraguey—which isn’t a wine you’ve ever tasted, so don’t pretend. It’s heaven with strawberries.”

“Where are we going?”

“Name of Hawkins. Bring some money in case we see anything we want to buy. The motor-car is the property of a man called Hardcastle. Return the bits to him if I kill myself; I’m not very good at driving.”

Beyond the gate, beyond the winter garden that was once the lodge, stood an open, two-seater Morris-Cowley. Sebastian’s Teddy-bear sat at the wheel. We put him between us—“Take care he’s not sick”—and drove off.