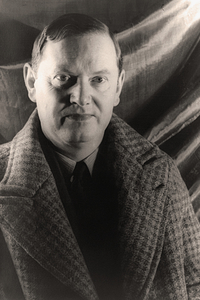 Arthur Evelyn St. John Waugh was an English writer of novels, biographies, and travel books. His most famous works include the early satires Decline and Fall (1928) and A Handful of Dust (1934), the novel Brideshead Revisited (1945), and the Second World War trilogy Sword of Honour (1952–1961). He is recognised as one of the great prose stylists of the English language in the 20th century.

As a young man, he acquired many fashionable and aristocratic friends and developed a taste for country house society. He travelled extensively in the 1930s, often as a special newspaper correspondent; he reported from Abyssinia at the time of the 1935 Italian invasion. He served in the British armed forces throughout the Second World War, first in the Royal Marines and then in the Royal Horse Guards. He was a perceptive writer who used the experiences and the wide range of people whom he encountered in his works of fiction, generally to humorous effect. Waugh’s detachment was such that he fictionalised his own mental breakdown which occurred in the early 1950s.

He displayed to the world a mask of indifference, but he was capable of great kindness to those whom he considered his friends. After his death in 1966, he acquired a following of new readers through the film and television versions of his works, such as the television serial Brideshead Revisited. (source: wikipedia)

Charles Ryder, a lonely student at Oxford, is captivated by the outrageous and decadent Sebastian Flyte. Invited to Brideshead, Sebastian’s magnificent ...read more »

Expelled from Oxford for indecent behaviour, Paul Pennyfeather is oddly unsurprised to find himself qualifying for the position of schoolmaster at Llana...read more »

Guy Crouchback, determined to get into the war, takes a commission in the Royal Corps of Halberdiers. His spirits high, he sees all the trimmings but no...read more »

Lord Copper, newspaper magnate and proprietor of the “Daily Beast”, has always prided himself on his intuitive flair for spotting ace reporters. That is...read more »

The Bright Young Things of 1920s Mayfair, with their paradoxical mix of innocence and sophistication, exercise their inventive minds and vile bodies in ...read more »