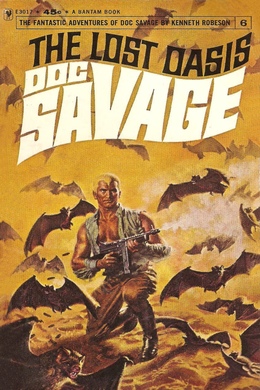 While seeking to solve the mystery of “the trained vampire murders,” Doc Savage and his amazing crew suddenly find themselves prisoners of Sol Yuttal and Hadi-Mot aboard a hijacked Zeppelin. Their deadly destination is a fabulous lost diamond mine guarded by carnivorous plants and monstrous, bloodsucking bats.

The New York water front was in the grip of excitement. Expectant, curious crowds milled in the district, and more were arriving.

Nearly every pier end—these offered the best views of the harbor—held a cluster of staring individuals. There was much talk, and the watchers bought numerous newspapers.

Perfect strangers argued over the headlines as though they had been life-long acquaintances. These discussions always ended with both participants fixing intent stares upon the bay surface.

The absence of a moon made the early evening darkness rather murky. Many spectators secured binoculars and telescopes from hawkers who offered these articles for rent. Newsboys were yelling themselves hoarse. Peanuts, pretzels, hot dogs, and soft drinks were selling fast. But even the peddlers frequently took off long enough to scamper out on the piers and gaze at the bay.

Taxi after taxi crowded down to the water front, horns blaring, and unloaded passengers. Often as not, the drivers deserted their machines and hurried out on the wharves to watch.

Many of the taxi riders were newspaper reporters and cameramen, the latter burdened with equipment for taking flashlight pictures.

In the general hubbub, it was doubtful if any one noticed one cab which behaved differently than the others. For one thing, this machine did not head for the center of excitement, but made for a spot where warehouses cast deep shadows.

Once, in signaling a turn, the driver held out his hand. The hand was enormous. Indeed, it was such a huge hand that a motorist, an observant fellow, who chanced to be driving behind, blinked in amazement.

The cab pulled to a quiet, furtive stop in the gloom.

A traffic cop hurried up, calling: “Hey, fella, who d’you think you are? This is no-parking zone along here!”

The amazingly big hand of the driver swung out of the window, the massive thumb jerked expressively at the rear seat of the cab, which was in darkness.

The cop was puzzled, but he obeyed the invitation to inspect the taxi passenger. He tugged the door open, and used his flashlight. When he saw who occupied the cushions, his eyes flew wide. He stepped back and executed a smart salute.

“Begging your pardon, sir!” he exclaimed. “I didn’t know who it was! You can park anywhere, of course!”

The mysterious personage in the rear of the cab did not speak.

Shifting his flashlight from one hand to the other, the officer seemed to be striving to swallow an overpowering curiosity. But it got the best of him.

“I thought—that is, the newspapers have been saying you were out of town,” he stated uncertainly. “No one has been able to find you!”

“I returned to the city less than an hour ago.” The mysterious man in the cab had a remarkable voice. It was pleasant, yet it possessed a quality of vibrant power which was instantly impressive.

The cop saluted again. “If I can tell you anything about this strange business, I’ll be glad to do it!”

“Do you possess any information the newspapers have not published?”

“No, sir. The darn newspaper reporters know as much as we do, and they’ve smeared it all on the front pages. That’s why there’s such a crowd down here.”

“I have read the papers,” said the personage in the taxi.

The officer shifted uneasily, then finally mastered the determination to suggest, “The police are naturally curious about this affair, so we’d be mighty glad to know anything you can tell us.”

A pleasant laugh came from the man in the cab. “This is as much a mystery to me as to anybody, officer.”

The cop offered: “I thought perhaps your five associates——”

The driver—he of the enormous hands—interrupted in a voice so deep it almost sounded as if a lion had started roaring.

“We don’t know anything more than the newspapers!” he declared. “A radio message came from the steamer Yankee Beauty, in mid-ocean, seeking to get in touch with Doc Savage. It was signed simply, ‘Imperiled!’ We radioed back that Doc was out of town, and that nobody could locate him. The next thing we knew, this ‘Imperiled’ person had gotten in touch with the newspapers and offered the reward.”

The officer peered at the big-fisted driver. “You are Renny—Colonel John Renwick, the engineer, aren’t you? I should have recognized those fists.”

Once more the policeman addressed a salute to the personage in the rear of the cab. “Anything you wish me to do, Mr. Savage?”

“Just don’t advertise the fact that I’m around here!”

The cop drifted away.