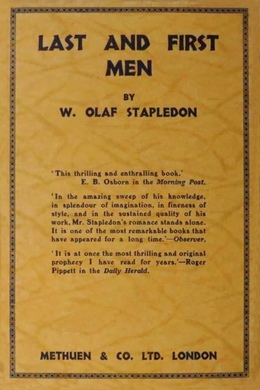 A Story of the Near and Far Future

A work of unprecedented scale in the genre, it describes the history of humanity from the present onwards across two billion years and eighteen distinct human species, of which our own is the first and most primitive. Stapledon’s conception of history is based on the Hegelian Dialectic, following a repetitive cycle with many varied civilizations rising from and descending back into savagery over millions of years, but it is also one of progress, as the later civilizations rise to far greater heights than the first.

Observe now your own epoch of history as it appears to the Last Men.

Long before the human spirit awoke to clear cognizance of the world and itself, it sometimes stirred in its sleep, opened bewildered eyes, and slept again. One of these moments of precocious experience embraces the whole struggle of the First Men from savagery toward civilization. Within that moment, you stand almost in the very instant when the species attains its zenith. Scarcely at all beyond your own day is this early culture to be seen progressing, and already in your time the mentality of the race shows signs of decline.

The first, and some would say the greatest, achievement of your own “Western” culture was the conceiving of two ideals of conduct, both essential to the spirit’s well-being. Socrates, delighting in the truth for its own sake and not merely for practical ends, glorified unbiased thinking, honesty of mind and speech. Jesus, delighting in the actual human persons around him, and in that flavour of divinity which, for him, pervaded the world, stood for unselfish love of neighbours and of God. Socrates woke to the ideal of dispassionate intelligence, Jesus to the ideal of passionate yet self-oblivious worship. Socrates urged intellectual integrity, Jesus integrity of will. Each, of course, though starting with a different emphasis, involved the other.

Unfortunately both these ideals demanded of the human brain a degree of vitality and coherence of which the nervous system of the First Men was never really capable. For many centuries these twin stars enticed the more precociously human of human animals, in vain. And the failure to put these ideals in practice helped to engender in the race a cynical lassitude which was one cause of its decay.

There were other causes. The peoples from whom sprang Socrates and Jesus were also among the first to conceive admiration for Fate. In Greek tragic art and Hebrew worship of divine law, as also in the Indian resignation, man experienced, at first very obscurely, that vision of an alien and supernal beauty, which was to exalt and perplex him again and again throughout his whole career. The conflict between this worship and the intransigent loyalty to Life, embattled against Death, proved insoluble. And though few individuals were ever clearly conscious of the issue, the first human species was again and again unwittingly hampered in its spiritual development by this supreme perplexity.

While man was being whipped and enticed by these precocious experiences, the actual social constitution of his world kept changing so rapidly through increased mastery over physical energy, that his primitive nature could no longer cope with the complexity of his environment. Animals that were fashioned for hunting and fighting in the wild were suddenly called upon to be citizens, and moreover citizens of a world-community. At the same time they found themselves possessed of certain very dangerous powers which their petty minds were not fit to use. Man struggled; but, as you shall hear, he broke under the strain.

The European War, called at the time the War to End War, was the first and least destructive of those world conflicts which display so tragically the incompetence of the First Men to control their own nature. At the outset a tangle of motives, some honourable and some disreputable, ignited a conflict for which both antagonists were all too well prepared, though neither seriously intended it. A real difference of temperament between Latin France and Nordic Germany combined with a superficial rivalry between Germany and England, and a number of stupidly brutal gestures on the part of the German Government and military command, to divide the world into two camps; yet in such a manner that it is impossible to find any difference of principle between them. During the struggle each party was convinced that it alone stood for civilization. But in fact both succumbed now and again to impulses of sheer brutality, and both achieved acts not merely of heroism, but of generosity unusual among the First Men. For conduct which to clearer minds seems merely sane, was in those days to be performed only by rare vision and self-mastery.

As the months of agony advanced, there was bred in the warring peoples a genuine and even passionate will for peace and a united world. Out of the conflict of the tribes arose, at least for a while, a spirit loftier than tribalism. But this fervour lacked as yet clear guidance, lacked even the courage of conviction. The peace which followed the European War is one of the most significant moments of ancient history; for it epitomizes both the dawning vision and the incurable blindness, both the impulse toward a higher loyalty and the compulsive tribalism of a race which was, after all, but superficially human.