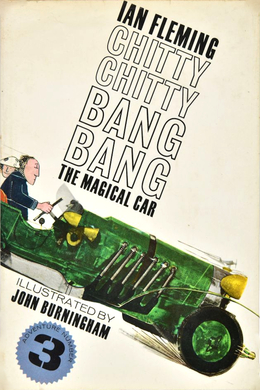 The final book in Iam Fleming’s fantastical children’s adventure about a flying, floating, self-driving automobile that takes the Pott family on a riotous series of adventures as they try to capture a notorious gang of robbers. Filled with humor, adventure, and gadgetry that only a genius like Fleming could invent. The 1968 movie of the same name, starring Dick Van Dyke, was based loosely on these stories.

The moon shone down on the Hotel Splendide where the Pott family, Commander Caractacus Pott, Mimsie, and the twins, Jeremy and Jemima, lay fast asleep after their terrific adventures of the last twenty–four hours. In the hotel garage CHITTY–CHITTY–BANG–BANG was also dozing comfortably, as her engine and crank–shaft and brake–linings cooled off after her exciting dash across the Channel to France.

When Joe the Monster had seen the lights go out in the hotel and had noticed from the shadows on the blinds that Commander Pott and Mimsie were sleeping in one room, with Jeremy and Jemima in another room next door, he and his ruffians got swiftly to work.

From the boot of the car they took out a number of burglarious instruments—a telescopic aluminium ladder for climbing the wall of the hotel, a jemmy (this is a burglar’s tool for opening windows and doors that looks rather like a very powerful tin–opener) and some rope. Joe the Monster whispered a series of commands, and in a trice the gang had run the ladder up the hotel wall to the room where Jeremy and Jemima lay fast asleep. Then, while Man–Mountain Fink, who was as strong and as big as he sounds, held the foot of the ladder, Soapy Sam, who was a very tiny man but a very strong one, crept softly up the ladder and after some quick work with the jemmy slipped over the window–sill into the room where the twins lay sleeping.

He had had his orders. He went first to Jemima’s bed, whirled up the four corners of the sheet on which she was lying, and with her bundled up inside it, tied a knot out of the four corners so as to make her look like a bundle of washing. And almost before she could awake he handed her softly out of the window and into the arms of Man–Mountain Fink.

Jeremy had stirred in his sleep, but here again it only needed a few quick movements and he too was on his way out of the window, and then their clothes and shoes were hurled pell–mell after them.

But of course the children were quickly awake, and even before they could be bundled into the back of the black car they had started to struggle and squeak.

But, alas, not loud enough!

Mimsie woke up and said sleepily to Commander Pott, “Did you hear that squeaking? It sounded sort of muffled. I suppose it wasn’t the children.”

But Commander Pott only gave a sleepy grunt and said, “I expect it was bats or mice,” and went firmly off to sleep again. And neither of them paid any attention to the sound of the black car starting up and softly driving away.

Fortunately CHITTY–CHITTY–BANG–BANG had smelt trouble. Heaven knows how, but there it is. There was much about this magical car that even Commander Pott couldn’t understand. All I can say is that, as the gangsters’ low black roadster stole away down the moonlit streets, perhaps its movement jolted something or made some electrical connection in the mysterious insides of CHITTY–CHITTY–BANG–BANG, but anyway there was the tiny soft whirr of machinery, hardly louder than the buzz of a mosquito, and behind the mascot on the bonnet, a small antenna, like a wireless aerial, rose softly, and the small oval bit of wire mesh in miniature, rather like what you see on top of the big radar pylons on aerodromes, began to swivel until it was directly pointing after the gangsters’ car, which was now hurtling up the great main road towards Paris.

And all through the night, while Commander Pott and Mimsie were asleep and while the twins were being bumped about in the back of the gangsters’ car, CHITTY–CHITTY–BANG–BANG’S Radar Eye was following every twist and turn of Joe the Monster, hunched over the wheel of his black tourer.

Now Joe the Monster, was in fact head of an international gang of robbers and ruffians and he was known in France as Joe le Monstre (I hope this isn’t the first French word you’ve learnt!). And when things got too hot for him in England he moved his gang over to France and vice versa.

As soon as they got out of the town of Calais, he ordered the knots on top of the sheet bundles which contained Jeremy and Jemima to be undone by Soapy Sam and Blood–Money Banks, between whom the twins were wedged on the back seat. For although he was a monster in the eyes of the law, neither he nor his gang of crooks were so monstrous as to want Jeremy and Jemima to suffocate.

The two children were too startled to know really what was happening to them. They both knew it wasn’t something good, but being children of rather adventurous parents, they weren’t easily frightened.

Joe the Monster leant back from the wheel and said over his shoulder, in a voice that was meant to be sugary, “Now then, duckies, everything’s quite all right. Your dear pa and ma have asked us to take you for a little night drive to see something of the French countryside by moonlight.” He turned to Man–Mountain Fink, who sat beside him. “Ain’t that right, Man–Mountain?”