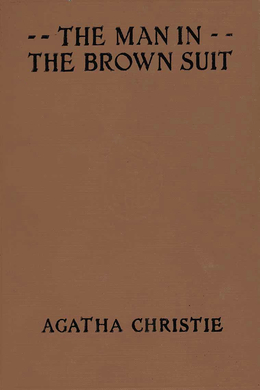 The Man in the Brown Suit

Newly-orphaned Anne Beddingfeld is a nice English girl looking for a bit of adventure in London. But she stumbles upon more than she bargained for! Anne is on the platform at Hyde Park Corner tube station when a man falls onto the live track, dying instantly. A doctor examines the man, pronounces him dead, and leaves, dropping a note on his way. Anne picks up the note, which reads “17.1 22 Kilmorden Castle”. The next day the newspapers report that a beautiful ballet dancer has been found dead there–brutally strangled. A fabulous fortune in diamonds has vanished. And now, aboard the luxury liner Kilmorden Castle, mysterious strangers pillage her cabin and try to strangle her. What are they looking for? Why should they want her dead? Lovely Anne is the last person on earth suited to solve this mystery…and the only one who can! Anne’s journey to unravel the mystery takes her as far afield as Africa and the tension mounts with every step.

Everybody has been at me, right and left, to write this story from the great (represented by Lord Nasby) to the small (represented by our late maid of all work, Emily, whom I saw when I was last in England. “Lor’, miss, what a beyewtiful book you might make out of it all—just like the pictures!”).

I’ll admit that I’ve certain qualifications for the task. I was mixed up in the affair from the very beginning, I was in the thick of it all through, and I was triumphantly “in at the death.” Very fortunately, too, the gaps that I cannot supply from my own knowledge are amply covered by Sir Eustace Pedler’s diary, of which he has kindly begged me to make use.

So here goes. Anne Beddingfeld starts to narrate her adventures.

I’d always longed for adventures. You see, my life had such a dreadful sameness. My father, Professor Beddingfeld, was one of England’s greatest living authorities on Primitive Man. He really was a genius—every one admits that. His mind dwelt in Palaeolithic times, and the inconvenience of life for him was that his body inhabited the modern world. Papa did not care for modern man—even Neolithic Man he despised as a mere herder of cattle, and he did not rise to enthusiasm until he reached the Mousterian period.

Unfortunately one cannot entirely dispense with modern men. One is forced to have some kind of truck with butchers and bakers and milkmen and greengrocers. Therefore, Papa being immersed in the past, Mamma having died when I was a baby, it fell to me to undertake the practical side of living. Frankly, I hate Palaeolithic Man, be he Aurignacian, Mousterian, Chellian, or anything else, and though I typed and revised most of Papa’s Neanderthal Man and his Ancestors, Neanderthal men themselves fill me with loathing, and I always reflect what a fortunate circumstance it was that they became extinct in remote ages.

I do not know whether Papa guessed my feelings on the subject, probably not, and in any case he would not have been interested. The opinion of other people never interested him in the slightest degree. I think it was really a sign of his greatness. In the same way, he lived quite detached from the necessities of daily life. He ate what was put before him in an exemplary fashion, but seemed mildly pained when the question of paying for it arose. We never seemed to have any money. His celebrity was not of the kind that brought in a cash return. Although he was a fellow of almost every important society, and had rows of letters after his name, the general public scarcely knew of his existence, and his long learned books, though adding signally to the sum–total of human knowledge, had no attraction for the masses. Only on one occasion did he leap into the public gaze. He had read a paper before some society on the subject of the young of the chimpanzee. The young of the human race show some anthropoid features, whereas the young of the chimpanzee approach more nearly to the human than the adult chimpanzee does. That seems to show that whereas our ancestors were more Simian than we are, the chimpanzee’s were of a higher type than the present species—in other words, the chimpanzee is a degenerate. That enterprising newspaper, the Daily Budget, being hard up for something spicy, immediately brought itself out with large headlines. “We are not descended from monkeys, but are monkeys descended from us? Eminent Professor says chimpanzees are decadent humans.” Shortly afterwards a reporter called to see Papa, and endeavoured to induce him to write a series of popular articles on the theory. I have seldom seen Papa so angry. He turned the reporter out of the house with scant ceremony, much to my secret sorrow, as we were particularly short of money at the moment. In fact, for a moment I meditated running after the young man and informing him that my father had changed his mind and would send the articles in question. I could easily have written them myself, and the probabilities were that Papa would never have learnt of the transaction, not being a reader of the Daily Budget. However, I rejected this course as being too risky, so I merely put on my best hat and went sadly down the village to interview our justly irate grocer.

The reporter from the Daily Budget was the only young man who ever came to our house. There were times when I envied Emily, our little servant, who “walked out” whenever occasion offered with a large sailor to whom she was affianced. In between times, to “keep her hand in” as she expressed it, she walked out with the greengrocer’s young man, and the chemist’s assistant. I reflected sadly that I had no one to “keep my hand in” with. All Papa’s friends were aged Professors—usually with long beards. It is true that Professor Peterson once clasped me affectionately and said I had a “neat little waist” and then tried to kiss me. The phrase alone dated him hopelessly