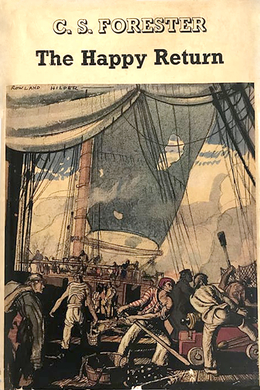 June 1808, somewhere west of Nicaragua-a site suitable for spectacular sea battles. The Admiralty has ordered Captain Horatio Hornblower, now in command of the thirty-six-gun HMS Lydia, to form an alliance against the Spanish colonial government with an insane Spanish landowner; to find a water route across the Central American isthmus; and ‘to take, sink, burn or destroy’ the fifty-gun Spanish ship of the line Natividad or face court-martial. A daunting enough set of orders-even if the happily married captain were not woefully distracted by the passenger he is obliged to take on in Panama: Lady Barbara Wellesley.

It was not long after dawn that Captain Hornblower came up on the quarterdeck of the Lydia. Bush, the first lieutenant, was officer of the watch, and touched his hat but did not speak to him; in a voyage which had by now lasted seven months without touching land he had learned something of his captain’s likes and dislikes. During this first hour of the day the captain was not to be spoken to, nor his train of thought interrupted.

In accordance with standing orders—hallowed by now with the tradition which is likely to accumulate during a voyage of such incredible length—Brown, the captain’s coxswain, had seen to it that the weather side of the quarterdeck had been holystoned and sanded at the first peep of daylight. Bush and the midshipman with him withdrew to the lee side at Hornblower’s first appearance, and Hornblower immediately began his daily hour’s walk up and down, up and down the twenty one feet of deck which had been sanded for him. On one hand his walk was limited by the slides of the quarterdeck carronades; on the other by the row of ringbolts in the deck for the attachment of the carronade train tackles; the space of deck on which Captain Hornblower was accustomed to exercise himself for an hour each morning was thus five feet wide and twenty one feet long.

Up and down, up and down, paced Captain Hornblower. Although he was entirely lost in thought, his subordinates knew by experience that his sailor’s instinct was quite alert; subconsciously his mind took note of the shadow of the main rigging across the deck, and of the feel of the breeze on his cheek, so that the slightest inattention on the part of the quartermaster at the wheel called forth a bitter rebuke from the captain—the more bitter in that he had been disturbed in this, the most important hour of his day. In the same way he was aware, without having taken special note, of all the salient facts of the prevailing conditions. On his awakening in his cot he had seen (without willing it) from the telltale compass in the deck over his head that the course was northeast, as it had been for the last three days. At the moment of his arrival on deck he had subconsciously noted that the wind was from the west, and just strong enough to give the ship steerage way, with all sail set to the royals, that the sky was of its perennial blue, and that the sea was almost flat calm, with a long peaceful swell over which the Lydia soared and swooped with profound regularity.

The first thing Captain Hornblower was aware of thinking was that the Pacific in the morning, deep blue overside and changing to silver towards the horizon, was like some heraldic blazon of argent and azure—and then he almost smiled to himself because that simile had come up in his mind every morning for the last fortnight. With the thought and the smile his mind was instantly working smoothly and rapidly. He looked down the gangways at the men at work holystoning; down on the main deck, as he came forward, he could see another party engaged on the same task. They were talking in ordinary tones. Twice he heard a laugh. That was well. Men who could talk and laugh in that fashion were not likely to be plotting mutiny—and Captain Hornblower had that possibility much in mind lately. Seven months at sea had almost consumed the ship’s stores. A week ago he had cut the daily ration of water to three pints a day, and three pints a day was hardly sufficient for men living on salt meat and biscuit in ten degrees north latitude, especially as water seven months in cask was half solid with green living things.

A week ago, too, the very last of the lemon juice had been served out, and there would be scurvy to reckon with within a month and no surgeon on board. Hankey the surgeon had died of all the complications of drink and syphilis off the Horn. For a month now tobacco had been doled out in half ounces weekly—Hornblower congratulated himself now on having taken the tobacco under his sole charge. If he had not done so the thoughtless fools would have used up their whole store, and men deprived of tobacco were men who could not be relied upon. He knew that the men were more concerned about the shortage of tobacco than about the shortage of fuel for the galley which caused them each day to be given their salt pork only just brought to the boil in seawater.

The shortage of tobacco, of water and of wood was nothing nearly as important, however, as the imminent shortage of grog. He had not dared to cut that daily issue, and there was only rum for ten more days in the ship. Not the finest crew in the world could be relied on if deprived of their ration of rum. Here they were in the South Sea, with no other King’s ship within two thousand miles of them. Somewhere to the westward were islands of romance, with beautiful women, and food to be got without labour. A life of happy idleness was within their reach