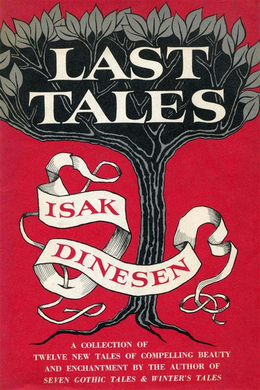 Last Tales is a collection of twelve of the last tales that Isak Dinesen wrote before her death in 1962. They include seven tales from Albondocani, a projected novel that was never completed but occupied the author for many years; The Caryatids, an unfinished Gothic tale of a couple bedeviled by an old letter and a gypsy’s spell; and three new tales of winter, (including Converse at Night in Copenhagen, a drunken, all-night conversation between a boy-king, a prostitute, and a poor young poet), each delivered in the fluid, magnetic style that continually draws us to her work.

Who are you?” the lady in black asked Cardinal Salviati. The Cardinal looked up, met the gaze of her wide–open eyes and smiled very gently.

“Who am I?” he repeated. “Verily, Madame, you are the first of my penitents who has ever asked me that question—the first, indeed, who has ever seemed to presume that I might have an identity of my own to confess to. I was not prepared for your question.”

The lady remained standing up straight before him; without taking her eyes off his face, she mechanically pulled on her long gloves. “Men and women,” the Cardinal went on, “in the course of time have come to me and have asked my advice. Many of them have come in deep distress…”

“As I myself!” she exclaimed.

“In deep distress and anguish,” he continued, “which, however, have never been deeper than my compassion with each of them—and have put their problems before me in all kinds of terms. Madame, the multitude of statements and arguments have been but so many variations of one single cry of the heart, of one single question: ‘Who am I?’ If I could but answer that question, if I could but solve that riddle for them, my consultants would be saved.”

“As I myself!” she cried out for the third time. “When I first told you of the horrible conflict, of the cruel dilemma which was rending my heart, I put before you, I know, a number of details, in themselves unconnected and contradictory, and so jarring that I had to stop the ears of my mind to them. In the course of our talks together all these fragments have been united into a whole. Oh, not into an idyll—I am well aware that I am in for a furioso—but into a harmony without a discordant note to it. You have shown me myself! I might tell you that you had created me, and that I had come to life under your hands, and surely it would have been both happiness and pain to have been thus created. But it is not so; my happiness and my pain are greater still, for you have made me see that I was already created—aye, created by the Lord God Himself and issued from His hands. From this hour, what on earth or in heaven can harm me? To the eyes of the world, it is true, I am standing at the edge of an abyss, or walking in a blizzard in wild mountains, but the abyss and the blizzard are the work of God and are infinitely and magnificently beautiful!”

She closed her eyes, then after a second looked up again.

“Yet,” she said, her voice soft, like the voice of a violin, “I shall be asking one more favor from you. I beg you to answer my question. Who are you?”

“Madame,” said the Cardinal after a long pause, “I am not in the habit of talking about myself, and your demand makes me feel a little shy. But I do not want to see you go away—and maybe we two shall never meet again—without having granted you your last request. And indeed,” he added, “I am beginning to take an interest in your question. Allow me, then, in order to save my modesty, to answer you in the classic manner, and to tell you a story.

“Take a seat, Madame. The story may be somewhat intricate, and I myself may be a somewhat slow raconteur.”

Without a word more the lady sat down in the big armchair indicated to her. The library in which the two found themselves was cool and high up; the noises of the street only reached the talker and the listener like the carefree murmur of a calm sea.

A girl of fifteen, the Cardinal began, with rich gifts of heart and mind, and magnificently innocent, was given away in marriage to a brusque and bigoted nobleman three times her age, who took a wife to have his name live on. A son was born to them, but the child was delicate and had but one eye. The doctors, who found a reason for the sad misfortune in the mother’s young age, advised her husband to allow a few years to pass before the birth of another child. Not without some bitterness, the gentleman decided to follow their advice, and in his own mind fixed the period of waiting at three years. So as not to expose his inexperienced wife, during these three years, to the temptations of a worldly life, he took up residence in a palatial villa of his, overlooking beautiful, lonely mountain scenery, and engaged an old, impoverished but proud–hearted maiden aunt as dame de compagnie. And so as not to have the daily anxiety for a feeble, threatened being affect the Princess’ youthful vitality, he put his son out to nurse with a tenant family on another estate.

Possibly Prince Pompilio, who generally had firm faith in his own judgment, ought not this once to have yielded so easily to the old doctors’ opinion