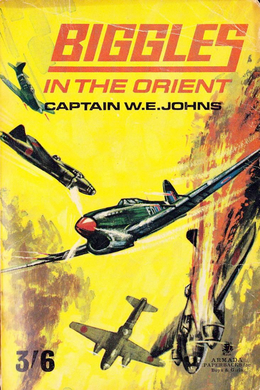 Biggles in the Orient

The war supply route between Calcutta and China is vital but something is attacking the planes that fly it. One by one pilots set off, only to disappear. By the time Biggles and his squad of eight arrive, flying the run is a suicide mission, and Biggles is their last hope.

With the serene dignity of a monarch bestowing a favour, His Majesty’s Flying–boat Capricorn kissed the turquoise water of the marine aircraft base at Calafrana, Malta, and in a surge of creamy foam came to rest by her mooring buoy, setting numerous smaller craft bobbing and curtsying in a gentle swell that was soon to die on the concrete slipways. Through the sparkling atmosphere of the Mediterranean dawn every detail of the rockbound coast stood revealed with a clarity unknown in northern isles.

In the cabin, Squadron Leader Bigglesworth, more commonly known to his friends (and, perhaps, his enemies) as “Biggles,” yawned as he stood up and reached for the haversack containing his small–kit that rested on the luggage rack above his seat.

“I’ve had a nice sleep,” he announced inconsequently, for the benefit of the several officers of his squadron who were pulling on shoes, fastening tunics, and the like, preparatory to disembarking.

It was the same little band of hard–hitting warriors that had fought under him during the Battle of Britain, in the Western Desert, and elsewhere, and more than one carried scars as perpetual souvenirs of these theatres of war. That none had been killed was, admittedly, a matter for wonder. There were some who ascribed this to astonishing good fortune; others, to leadership which combined caution with courage. Other reasons put forward were superb flying, straight shooting, and close co–operation—which is another way of saying that sort of comradeship which puts the team before self. The truth was probably to be found in a combination of all these attributes.

There were the three flight commanders: Algy Lacey, fair and freckled; Lord “Bertie” Lissie, effeminate in face and manner, for ever polishing an eyeglass for no reason that anyone could discover; and Angus Mackail, twelve stone of brawn and brain, with heather in his brogue and an old regimental glengarry on his head. All wore the purple and white ribbon of the D.F.C.

The rest were flying officers; like the flight–lieutenants they were all long overdue for promotion, but as this would have meant leaving the squadron (wherein there was no establishment for senior ranks, and consequently no chance of advancement) they had forgone promotion to remain in the same mess. There was “Ginger” Hebblethwaite, a waif who had attached himself to Biggles and Algy before the war, and who had almost forgotten the slum in which he had been born; “Tex” O’Hara, a product of the wide open spaces of Texas, U.S.A.; “Taffy” Hughes, whose paternal ancestor may have been one of those Welsh knifemen that helped the Black Prince to make a name for valour, “Tug” Carrington, a Cockney and proud of it, handy with his “dukes,” hating all aggressors (and Nazis in particular) with a passion that sometimes startled the others; Henry Harcourt, a thin, pale, thoughtful–eyed Oxford undergraduate, who really loathed war yet had learned how to fight; and “Ferocity” Ferris, who, born in a back street of Liverpool, had got his commission, not by accident (as he sometimes said) but by sheer flying ability.

This strange assortment of humanity, which could only have been drawn together by the vortex of war, formed Number 666 (Fighter) Squadron, R.A.F. More usually it was referred to in places where airmen meet as “Biggles’ Squadron.” And this was the literal truth, for on the formation of the unit, to Biggles had been sent—with his knowledge, of course—pilots of peculiar temperament, men with only two things in common, utter fearlessness and a disinclination to submit to discipline—two traits that often go together. Nevertheless, by example, by the force of his own personality, and by a queer sort of discipline which appeared to be lax, but was, in fact, rigid, Biggles had moulded them into a team with a reputation that was as well known to the enemy as to the Air Ministry. The result was a third common factor—loyalty; loyalty to the service, to the team, and above all, to their leader.

“There’s a cutter coming out, presumably to take us ashore,” observed Algy, from a seat that commanded a view of the port. “Now we shall know what it’s all about. I must confess to some curiosity as to the whys and wherefores of this sudden rush to Malta.”

“It isn’t customary for an Air Commode to turn out to meet new arrivals,” remarked Ginger. “There’s an Air Commodore in the stern of that cutter—I can see his scrambled eggs from here.”

“Maybe it’s a new regulation. Welcome to your new home, gentlemen, and all that sort of thing—if you see what I mean?” suggested Bertie, brightly.

A minute later the Air Commodore stepped aboard. He went straight to Biggles, who by this time was looking a trifle surprised at this unusual reception.