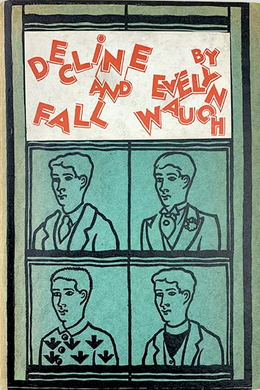 Expelled from Oxford for indecent behaviour, Paul Pennyfeather is oddly unsurprised to find himself qualifying for the position of schoolmaster at Llanabba Castle. His colleagues are an assortment of misfits, including Prendy (plagued by doubts) and captain Grimes, who is always in the soup (or just plain drunk). Then Sports Day arrives, and with it the delectable Margot Beste-Chetwynde, floating on a scented breeze. As the farce unfolds and the young run riot, no one is safe, least of all Paul. Taking its title from Edward Gibbon’s Decline and Fall of the Roman Empire, Evelyn Waugh’s first, funniest novel immediately caught the ear of the public with his account of an ingénu abroad in the decadent confusion of 1920s high society.

‘Sent down for indecent behaviour, eh?’ said Paul Pennyfeather’s guardian. ‘Well, thank God your poor father has been spared this disgrace. That’s all I can say.’

There was a hush in Onslow Square, unbroken except by Paul’s guardian’s daughter’s gramophone playing Gilbert and Sullivan in her little pink boudoir at the top of the stairs.

‘My daughter must know nothing of this,’ continued Paul’s guardian.

There was another pause.

‘Well,’ he resumed, ‘you know the terms of your father’s will. He left the sum of five thousand pounds, the interest of which was to be devoted to your education and the sum to be absolutely yours on your twenty-first birthday. That, if I am right, falls in eleven months’ time. In the event of your education being finished before that time, he left me with complete discretion to withhold this allowance should I not consider your course of life satisfactory. I do not think that I should be fulfilling the trust which your poor father placed in me if, in the present circumstances, I continued any allowance. Moreover, you will be the first to realize how impossible it would be for me to ask you to share the same home with my daughter.’

‘But what is to happen to me?’ said Paul.

‘I think you ought to find some work,’ said his guardian thoughtfully. ‘Nothing like it for taking the mind off nasty subjects.’

‘But what kind of work?’

‘Just work, good healthy toil. You have led too sheltered a life, Paul. Perhaps I am to blame. It will do you the world of good to face facts for a bit–look at life in the raw, you know. See things steadily and see them whole, eh?’ And Paul’s guardian lit another cigar.

‘Have I no legal right to any money at all?’ asked Paul.

‘None whatever, my dear boy,’ said his guardian quite cheerfully….

That spring Paul’s guardian’s daughter had two new evening frocks and, thus glorified, became engaged to a well-conducted young man in the Office of Works.

‘Sent down for indecent behaviour, eh?’ said Mr Levy, of Church and Gargoyle, scholastic agents. ‘Well, I don’t think we’ll say anything about that. In fact, officially, mind, you haven’t told me. We call that sort of thing “Education discontinued for personal reasons”, you understand.’ He picked up the telephone. ‘Mr Samson, have we any “education discontinued” posts, male, on hand? … Right! … Bring it up, will you? I think,’ he added, turning again to Paul, ‘we have just the thing for you.’

A young man brought in a slip of paper.

‘Might have been made for you,’ said Mr Levy.

‘But I don’t know a word of German, I’ve had no experience, I’ve got no testimonials, and I can’t play cricket.’

‘It doesn’t do to be too modest,’ said Mr Levy. ‘It’s wonderful what one can teach when one tries. Why, only last term we sent a man who had never been in a laboratory in his life as senior Science Master to one of our leading public schools. He came wanting to do private coaching in music. He’s doing very well, I believe. Besides, Dr Fagan can’t expect all that for the salary he’s offering. Between ourselves, Llanabba hasn’t a good name in the profession. We class schools, you see, into four grades: Leading School, First-rate School, Good School, and School. Frankly,’ said Mr Levy, ‘School is pretty bad. I think you’ll find it a very suitable post. So far as I know, there are only two other candidates, and one of them is totally deaf, poor fellow.’

Next day Paul went to Church and Gargoyle to interview Dr Fagan. He had not long to wait. Dr Fagan was already there interviewing the other candidates. After a few minutes Mr Levy led Paul into the room, introduced him, and left them together.

‘A most exhaustive interview,’ said Dr Fagan. ‘I am sure he was a very nice young man, but I could not make him understand a word I said. Can you hear me quite clearly?’

‘Good; then let us get to business.’

Paul eyed him shyly across the table. He was very tall and very old and very well dressed; he had sunken eyes and rather long white hair over jet black eyebrows. His head was very long, and swayed lightly as he spoke; his voice had a thousand modulations, as though at some remote time he had taken lessons in elocution; the backs of his hands were hairy, and his fingers were crooked like claws.