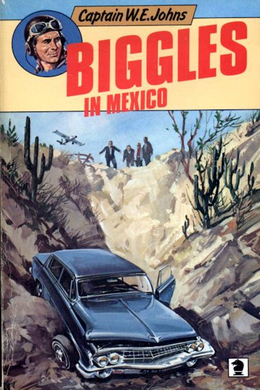 Biggles and Ginger, are sent to Mexico by Air Commodore Raymond in an attempt to trace the whereabouts of a stash of diamonds that have been stolen by a London gang. They had been tipped off by David ‘Tricky’ Adamson, who had originally been involved with the gang but had fled to Canada after a murder had been committed in the diamond heist. He informed Raymond that the other three gang members, who rejoiced in the nicknames of ‘Ritzy’, ‘Corny’ and ‘Nifty’ had departed to Eltora in Mexico to keep out of the way of the authorities and to arrange a deal with an international dealer.

The sun blazed.It flayed the thirsty desert with bars of heat that knew no mercy, turning the arid north– west corner of Mexico into a glowing desolation.The air writhed and quivered under the relentless lash.

Over all hung an ominous calm.A sinister silence.A profound, smothering silence, as if all life had been blotted out.Nothing stirred except the heatwaves, which set some distant mountains dancing and the horizon shimmering like a restless sea.

There was no colour anywhere.All had faded in the devouring white light hurled down from a sky of burnished steel.Under it everything stood still and stark.The shadows of the saguaros, _See Glossary on page 184 _ the giant cactuses which stood like the pillars of a lost civilization, were thin and pale.Some of these monstrous vegetables had lost their flesh, having had it pecked out by desperate birds of passage, so that only the skeleton remained.

With a blast of heat as from a furnace the fiery master overhead struck at everything without discrimination. The dull alkaline sand; the grey chaparral— the usual desert growths of mesquit, yucca, agave, cactus and sagebrush.It struck at the bleaching bones of creatures that had perished; at outcrops of sand– eroded rock; boulders and buttes; meaningless patterns of arroyos, gullies, and dried– up river beds that looked as if the tongues of stricken monsters had scoured the earth in a frenzied search for moisture.

It struck at the road that wound a sinuous course across the waste— if two ruts wriggling through the sand could be called a road.It struck at a heap of blistered wood and rusty metal, half buried in a drift of wind– blown sand, that had once been a motor– car. And it struck at a touring car which, grey with dust, crawled along the track towards the wreck.

There were two men in the car.Their faces, too, were grey with dust. Through it sweat had furrowed little lines.Even their friends would have found it hard to recognize Biggles of the Air Police, or his companion, Police Pilot Ginger Hebblethwaite.

For the most part they travelled in silence, their lips shut tight to conserve the natural saliva of their mouths.But coming to the abandoned automobile Biggles spoke.‘This could be Tricky Adamson’ s car.It’ s a Ford and has a Californian number plate.It must be somewhere about here.’

‘Unless his tale was a lie.’

‘As you say, unless he lied; but I think he told the truth.The landscape conforms to what he said of it, anyway.’

Biggles stopped the car.They got out and walked to the wreck.As Biggles looked in the open window, with a squawk of fright a little owl flew out.Biggles made a brief inspection.‘As one would expect, the car’ s been stripped of anything worth taking.We shall find nothing here.Let’ s press on.’

They returned to their own car.

As Biggles started it and moved forward Ginger said; ‘If anything goes wrong we’ re likely to end up like that.We must have been out of our minds to tackle this run in a used car.’

‘You mean, I must have been,‘corrected Biggles.‘The scheme was mine. I didn’ t imagine anything like this.Maybe I should, but it’ s always easy to foresee trouble after it’ s happened.I allowed for a run of from two to three hours.Certainly not more than four.And, foolishly perhaps, I expected to find an occasional garage on the way.I know the map showed desert, but this track we’ re on was marked as a road, as indeed it was till we got to the frontier.’

‘It’ s been getting worse ever since.It looks as if it might peter out altogether.If it does we shall be in a mess.I should have gone lighter on those four bottles of mineral water we started with.’

‘We’ re nearer to being in a mess than you realize,‘said Biggles, grimly.

‘I notice the radiator’ s boiling.’

‘It isn’ t that that worries me so much, although at the rate things are going we may need that water for drinking before we’ ve finished.’

‘The clutch is slipping.I realized it as soon as we started on that first long hill. It’ s been getting worse, fast, ever since, grinding through this infernal sand. No car could be expected to stand up to such treatment for long.’

‘What if we come to another hill ?‘

‘We couldn’ t make it.She’ d burn right out.It’ s taking me all my time to keep her going on the level.I daren’ t go any faster.In fact, I couldn’ t.A few more miles of this and she’ ll go altogether.’

‘I have a feeling we went wrong at that last fork.There was no signpost, you remember.Hadn’ t we better turn back ?‘

‘I couldn’ t get her over that last hill.Our only chance now is to carry on and hope we don’ t come to another.’

‘Assuming we’ re on the right track, how far do you reckon we are from Eltora?‘

‘Not less than thirty miles.’