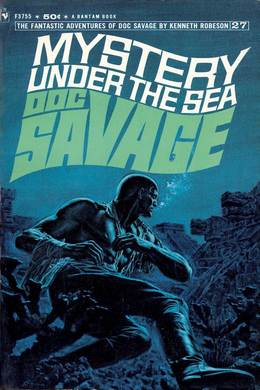 Mystery under the Sea

The dread riddle of Taz. There was only one clue to the bloody enigma of TAZ-the illegible, dying scrawl of a horribly mutilated sailor. What was the message he had so desperately tried to deliver? Why had sizzling acid been forced into his mouth? What secret had the dead man unraveled about the flamboyant and brutal Captain Flamingo? Held captive aboard a tramp steamer, The Man of Bronze and his bold allies wrestle with the dread riddle of Taz.

Paradise is a beach. It is on Long Island Sound near New York City and, being one of the most convenient spots for swimming, is much frequented during the summer. The patrons are jaded citizens of Manhattan who, having struggled for a living in the great city all week, come for a rest.

Paradise Beach was quiet. That was another reason why it was so popular.

On the first Saturday of September, however, the quiet of Paradise Beach was rudely shattered.

The guard executed a snappy dive off his platform and swam rapidly out into the Sound. A man was swimming feebly out there. The guard had thought he was a bather who had ventured out too far. But, reaching the swimmer, he discovered the fellow was clothed, except for shoes and coat.

A wave came in; it was not large, for they do not have large waves on Long Island Sound during calm weather. Yet it submerged the man swimming in his clothing, and it was some moments before he came up, gasping feebly.

The life guard lent a hand, holding the fellow up and, at the same time, peering out into the Sound in an effort to learn where the unfortunate had come from. It was too dark to see much. The guard decided the man must have been in a boat, that had sunk.

“Were you alone?” he demanded. “Does anybody else need help?”

“Shut up!” said the one who was being rescued. “Either get me ashore or leggo so I can swim.”

A light skiff, rowed by another life guard, arrived at that moment and both the first life guard and the man swimming in his clothes were taken aboard and paddled to the beach. The rescued man started to get out of the boat, as if he were in a great hurry to leave.

The fellow was restrained, however, by the life guard, who knew that persons who have been near drowning sometimes become hysterical and do not quite know what they are doing.

“Leggo, dope,” snarled the man who had been found swimming in his clothes.

“Not until the doctor looks you over,” said one of the guards.

The rescued man then acted very ungallantly. He seized an oar and managed, after a short skirmish, to crack the life guards over the head, knocking them both senseless.

The man ran away, his wet clothing making slopping noises.

A throng of no small proportions was on the beach, but the rescue had been executed so quietly that only a few had realized what was happening. Most of the sharper observers had been advancing cautiously to investigate. They broke into a run, and a loud outcry went up as they saw the brief skirmish which felled the two life guards.

At first, there was no attempt to apprehend the fleeing man. New Yorkers learn early that attending to their own business is a policy which avoids trouble. However, two ambitious souls did attempt to stop the runner. One of them, a fat man, got an oar jabbed in the stomach for his pains. The other was discouraged by a blow over the head.

The fleeing man reached a row of bathhouses and ducked between them.

At this point, it was doubtful if many persons were aware that a dark motor boat had come into the floodlighted area from the Sound. This craft carried several men. Driven by a powerful motor, it swerved in close to the beach, and all but one of the occupants sprang overboard and waded ashore.

The man who remained in the boat took it back out into the Sound, and it was shortly lost in the darkness.

Electric excitement suddenly swept Paradise Beach. Those men who had gotten out of the motor boat were masked. Moreover, they carried revolvers.

The masked, armed men raced after the one who was fleeing. At first, they were not interfered with, the patrons of the bathing beach naturally being unarmed.

Then one of the Paradise special policemen came racing forward. He shouted, and had a gun in his hand. There was a prompt burst of shots. The special officer suddenly concluded that his salary did not cover gun fighting, and ignominiously took shelter.

The procession—fleeing swimmers and armed pursuer—left the confines of Paradise Beach behind them. In the pavilions, the bathhouses, half a dozen telephones were being employed to call policemen. This, incidentally, did no good whatever.

The fugitive, by now, knew the pursuit was close on his heels. There was a parking lot beyond the bathing beach buildings, and he ducked into this, dodging among the parked machines, peering frequently into vehicles, obviously trying to find one that was not locked.

On the far side of the lot, an automobile engine started.”