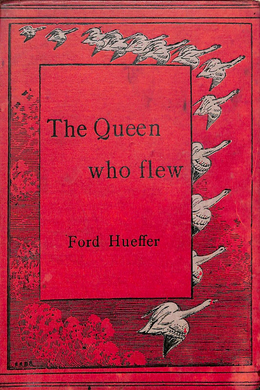 The Queen Who Flew

An intriguing fairy tale about an innocent Queen of a remote kingdom, who befriends and spends much of her time, talking to a bat. The bat tells her that he was once unable to fly, and convinces her that a magic flower will give her the power to fly. An adorable tale for young readers, and a great bedtime story as well.

Once upon a time a Queen sat in her garden. She was quite a young, young Queen; but that was a long while ago, so she would be older now. But, for all she was Queen over a great and powerful country, she led a very quiet life, and sat a great deal alone in her garden watching the roses grow, and talking to a bat that hung, head downwards, with its wings folded, for all the world like an umbrella, beneath the shade of a rose tree overhanging her favourite marble seat. She did not know much about the bat, not even that it could fly, for her servants and nurses would never allow her to be out at dusk, and the bat was a great deal too weak–eyed to fly about in the broad daylight.

But, one summer day, it happened that there was a revolution in the land, and the Queen’s servants, not knowing who was likely to get the upper hand, left the Queen all alone, and went to look at the fight that was raging.

But you must understand that in those days a revolution was a thing very different from what it would be to–day.

Instead of trying to get rid of the Queen altogether, the great nobles of the kingdom merely fought violently with each other for possession of the Queen’s person. Then they would proclaim themselves Regents of the kingdom and would issue bills of attainder against all their rivals, saying they were traitors against the Queen’s Government.

In fact, a revolution in those days was like what is called a change of Ministry now, save for the fact that they were rather fond of indulging themselves by decapitating their rivals when they had the chance, which of course one would never think of doing nowadays.

The Queen and the bat had been talking a good deal that afternoon—about the weather and about the revolution and the colour of cats and the like.

“The raven will have a good time of it for a day or two,” the bat said.

But the Queen shuddered. “Don’t be horrid,” she said.

“I wonder who’ll get the upper hand?” the bat said.

“I’m sure I don’t care a bit,” the Queen retorted. “It doesn’t make any difference to me. They all give me things to sign, and they all say I’m very beautiful.”

“That’s because they want to marry you,” the bat said.

And the Queen answered, “I suppose it is; but I shan’t marry them. And I wish all my attendants weren’t deaf and dumb; it makes it so awfully dull for me.”

“That’s so that they shan’t abuse the Regent behind his back,” the bat said. “Well, I shall take a fly.” The truth was, he felt insulted that the Queen should say she was dull when she had him to talk to.

But the Queen was quite frightened when he whizzed past her head and out into the dusky evening, where she could see him flitting about jerkily, and squeaking shrilly to paralyze the flies with fright.

After a while he got over his fit of sulks, and came back again to hang in his accustomed bough.

“Why—you can fly!” the Queen said breathlessly. It gave her a new idea of the importance of the bat.

The bat said, “I can.” He was flattered by her admiration.

“I wish I could fly,” the Queen said. “It would be so much more exciting than being boxed up here.”

“Because I haven’t got wings, I suppose,” the Queen said.

“You shouldn’t suppose,” the bat said sharply. “Half the evils in the world come from people supposing.”

“What are the ‘evils in the world’?” the Queen said.

And the bat answered, “What! don’t you even know that, you ignorant little thing? The evils in the world are ever so many—strong winds so that one can’t fly straight, and cold weather so that the flies die, and rheumatic pains in one’s wing–joints, and cats and swallows.”

“I like cats,” the Queen said; “and swallows are very pretty.”

The Queen saw that he was angry, and she held her peace for a while.

“I’m not nobody, all the same,” she thought to herself, “I’m the Queen of the ‘most prosperous and contented nation in the world,’ though I don’t quite understand what it means. But it will never do to offend the bat, it is so dreadfully dull when he won’t talk;” so she said, “Would it be possible for me to fly?” for a great longing had come into her heart to be able to fly away out of the garden with the roses and the marble bench.

“Well, it certainly won’t be if you suppose you can’t,” the bat said. “Now, when I was a mouse, I used to suppose I couldn’t fly, and so, of course, I couldn’t. But, one day, I saved the life of a cockchafer that had got into a beetle–trap, and he told me how it was to be managed.”

“How?” the Queen said eagerly.

“Ah, you like cats,” the bat said, “and you’d tell them the secret; and then there’d be no peace for me. Ugh!—flying cats!” And the bat shuddered and wrapped his wings round his head.