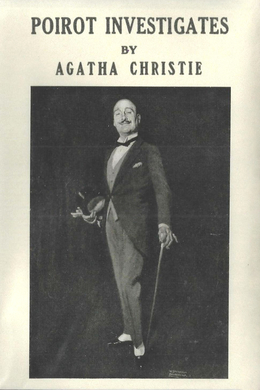 First there was the mystery of the film star and the diamond… then came the ‘suicide’ that was murder… the mystery of the absurdly cheap flat… a suspicious death in a locked gun-room… a million dollar bond robbery… the curse of a pharoah’s tomb… a jewel robbery by the sea… the abduction of a Prime Minister… the disappearance of a banker… a phone call from a dying man… and, finally, the mystery of the missing will.

What links these fascinating cases? Only the brilliant deductive powers of Hercule Poirot!

I was standing at the window of Poirot’s rooms looking out idly on the street below.

“That’s queer,” I ejaculated suddenly beneath my breath.

“What is, mon ami?” asked Poirot placidly, from the depths of his comfortable chair.

“Deduce, Poirot, from the following facts! Here is a young lady, richly dressed—fashionable hat, magnificent furs. She is coming along slowly, looking up at the houses as she goes. Unknown to her, she is being shadowed by three men and a middle–aged woman. They have just been joined by an errand boy who points after the girl, gesticulating as he does so. What drama is this being played? Is the girl a crook, and are the shadowers detectives preparing to arrest her? Or are they the scoundrels, and are they plotting to attack an innocent victim? What does the great detective say?”

“The great detective, mon ami, chooses, as ever, the simplest course. He rises to see for himself.” And my friend joined me at the window.

In a minute he gave vent to an amused chuckle.

“As usual, your facts are tinged with your incurable romanticism. That is Miss Mary Marvell, the film star. She is being followed by a bevy of admirers who have recognized her. And, en passant, my dear Hastings, she is quite aware of the fact!”

“So all is explained! But you get no marks for that, Poirot. It was a mere matter of recognition.”

“En vérité! And how many times have you seen Mary Marvell on the screen, mon cher?”

“About a dozen times perhaps.”

“And I—once! Yet I recognize her, and you do not.”

“She looks so different,” I replied rather feebly.

“Ah! Sacré!” cried Poirot. “Is it that you expect her to promenade herself in the streets of London in a cowboy hat, or with bare feet, and a bunch of curls, as an Irish colleen? Always with you it is the non–essentials! Remember the case of the dancer, Valerie Saintclair.”

I shrugged my shoulders, slightly annoyed.

“But console yourself, mon ami,” said Poirot, calming down. “All cannot be as Hercule Poirot! I know it well.”

“You really have the best opinion of yourself of anyone I ever knew!” I cried, divided between amusement and annoyance.

“What will you? When one is unique, one knows it! And others share that opinion—even, if I mistake not, Miss Mary Marvell.”

“Without doubt. She is coming here.”

“How do you make that out?”

“Very simply. This street, it is not aristocratic, mon ami! In it there is no fashionable doctor, no fashionable dentist—still less is there a fashionable milliner! But there is a fashionable detective. Oui, my friend, it is true—I am become the mode, the dernier cri! One says to another: ‘Comment? You have lost your gold pencil–case? You must go to the little Belgian. He is too marvellous! Every one goes! Courez!’ And they arrive! In flocks, mon ami! With problems of the most foolish!” A bell rang below. “What did I tell you? That is Miss Marvell.”

As usual, Poirot was right. After a short interval, the American film star was ushered in, and we rose to our feet.

Mary Marvell was undoubtedly one of the most popular actresses on the screen. She had only lately arrived in England in company with her husband, Gregory B. Rolf, also a film actor. Their marriage had taken place about a year ago in the States and this was their first visit to England. They had been given a great reception. Every one was prepared to go mad over Mary Marvell, her wonderful clothes, her furs, her jewels, above all one jewel, the great diamond which had been nicknamed, to match its owner, “the Western Star.” Much, true and untrue, had been written about this famous stone which was reported to be insured for the enormous sum of fifty thousand pounds.

All these details passed rapidly through my mind as I joined with Poirot in greeting our fair client.

Miss Marvell was small and slender, very fair and girlish–looking, with the wide innocent blue eyes of a child.

Poirot drew forward a chair for her, and she commenced talking at once.

“You will probably think me very foolish, Monsieur Poirot, but Lord Cronshaw was telling me last night how wonderfully you cleared up the mystery of his nephew’s death, and I felt that I just must have your advice. I dare say it’s only a silly hoax—Gregory says so—but it’s just worrying me to death.”

“Proceed, Madame. You comprehend, I am still in the dark.”

“It’s these letters.” Miss Marvell unclasped her handbag, and drew out three envelopes which she handed to Poirot.

The latter scrutinized them closely.

“Cheap paper—the name and address carefully printed. Let us see the inside.” He drew out the enclosure.

I had joined him, and was leaning over his shoulder. The writing consisted of a single sentence, carefully printed like the envelope. It ran as follows: