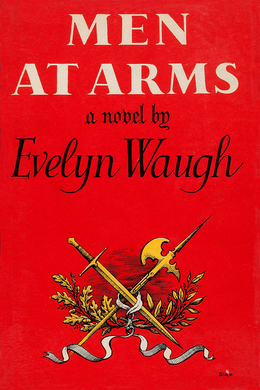 Guy Crouchback, determined to get into the war, takes a commission in the Royal Corps of Halberdiers. His spirits high, he sees all the trimmings but none of the action. And his first campaign, an abortive affair on the West African coastline, ends with an escapade that seriously blots his Halberdier copybook.

Men at Arms is the first novel in Waugh’s brilliant Sword of Honor trilogy recording the tumultuous wartime adventures of Guy Crouchback (‘the finest work of fiction in English to emerge from World War II’), which also comprises Officers and Gentlemen and Unconditional Surrender.

When Guy Crouchback’s grandparents, Gervase and Hermione, came to Italy on their honeymoon, French troops manned the defences of Rome, the Sovereign Pontiff drove out in an open carriage and Cardinals took their exercise side-saddle on the Pincian Hill.

Gervase and Hermione were welcomed in a score of frescoed palaces. Pope Pius received them in private audience and gave his special blessing to the union of two English families which had suffered for their Faith and yet retained a round share of material greatness. The chapel at Broome had never lacked a priest through all the penal years and the lands of Broome stretched undiminished and unencumbered from the Quantocks to the Blackdown Hills. Forbears of both their names had died on the scaffold. The City, lapped now by the tide of illustrious converts, still remembered with honour its old companions in arms.

Gervase Crouchback stroked his side-whiskers and found a respectful audience for his views on the Irish question and the Catholic missions in India. Hermione set up her easel among the ruins and while she painted Gervase read aloud from the poems of Tennyson and Patmore. She was pretty and spoke three languages; he was all that the Romans expected of an Englishman. Everywhere the fortunate pair were praised and petted but all was not entirely well with them. No sign or hint betrayed their distress but when the last wheels rolled away and they mounted to their final privacy, there was a sad gap between them, made by modesty and tenderness and innocence, which neither spoke of except in prayer.

Later they joined a yacht at Naples and steamed slowly up the coast, putting in at unfrequented harbours. And there, one night in their state room, all at last came right between them and their love was joyfully completed.

Before they fell asleep they felt the engines stop and heard the rattle of the anchor-chain, and when Gervase came on deck at dawn, he found that the ship lay in the shelter of a high peninsula. He called Hermione to join him and so standing together hand-in-hand, at the moist taffrail, they had their first view of Santa Dulcina delle Rocce and took the place and all its people into their exulting hearts.

The waterfront was thronged as though the inhabitants had been shaken from bed by an earthquake; their voices came clearly across the water, admiring the strange vessel. Houses rose steeply from the quay; two buildings stood out from the ochre and white walls and rusty pantiles, the church, domed, with a voluted façade, and a castle of some kind comprising two great bastions and what seemed a ruined watch-tower. Behind the town for a short distance the hillside was terraced and planted, then above broke wildly into boulders and briar. There was a card game which Gervase and Hermione had played together in the schoolroom in which the winner of a trick called, ‘I claim.’

‘I claim,’ cried Hermione, taking possession of all she saw by right of her happiness.

Later in the morning the English party landed. Two sailors went first to prevent any annoyance from the natives. There followed four couples of ladies and gentlemen; then the servants carrying hampers and shawls and sketching materials. The ladies wore yachting caps and held their skirts clear of the cobbles; some carried lorgnettes. The gentlemen protected them with fringed sunshades. It was a procession such as Santa Dulcina delle Rocce had never seen before. They sauntered through the arcades, plunged briefly into the cool twilight of the church and climbed the steps which led from the piazza to the fortifications.

Little remained. The great paved platform was broken everywhere with pine and broom. The watch-tower was full of rubble. Two cottages had been built in the hillside from the finely cut masonry of the old castle and two families of peasants ran out to greet them with bunches of mimosa. The picnic luncheon was spread in the shade.

‘Disappointing when you get up here,’ said the owner of the yacht apologetically. ‘Always the way with these places. Best seen from a distance.’

‘I think it’s quite perfect,’ said Hermione, ‘and we’re going to live here. Please don’t say a word against our castle.’

Gervase laughed indulgently with the others but later, when his father died and he seemed to be rich, the project came to life. Gervase made inquiries. The castle belonged to an elderly lawyer in Genoa who was happy to sell. Presently a plain square house rose above the ramparts and English stocks added their sweetness to the myrtle and the pine. Gervase called his new house the Villa Hermione, but the name never caught the local fancy. It was cut in large square letters on the gate-posts but honeysuckle spread and smothered it. The people of Santa Dulcina spoke always of the ‘Castello Crouchback’ until eventually that title found its way to the head of the writing-paper and Hermione, proud bride, was left without commemoration.