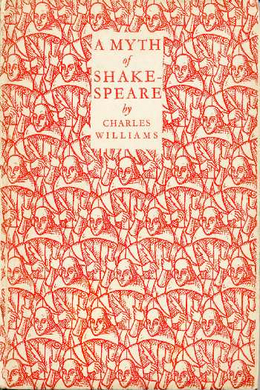 A Myth of Shakespeare

This play contains no thesis of Shakespeare’s life, character, or genius, except that he was a born poet and working dramatist. The scenes included were intended, quite mythically, to represent barely possible incidents in his life, passages read to or by his friends, or performances in his theatre.-adapted from the Note Charles Williams was one of the finest-not to mention one of the most unusual-theologians of the twentieth century. His mysticism is palpable-the unseen world interpenetrates ours at every point, and spiritual exchange occurs all the time, unseen and largely unlooked for. His novels are legend, his poetry profound, and as a member of the Inklings, he contributed to the mythopoetic revival in contemporary culture.

The following verse was written, at the suggestion and largely on the plan of Mr. A. C. Ward, of the City Literary Institute, for a Shakespeare festival; the first part for the afternoon performance, the second for the evening. Its purpose therefore is only to provide a momently credible framework for representative scenes and speeches from the Plays. It does not pretend to be an episodical play, after Mr. Drinkwater’s model, and here and there–especially in the scenes relating to the Court–it allows itself a freedom of anachronism which its title may excuse. It contains no thesis of Shakespeare’s life, character, or genius, except that he was a born poet and working dramatist. The scenes included were intended, quite mythically, to represent barely possible incidents in his life, passages read to or by his friends, or performances in his theatre.

It was originally intended that the Myth should be produced upon a double stage, the inner being separated from the outer by curtains which could be withdrawn whenever an actual scene from the Plays was given, its movement occupying either the inner or the whole stage as seemed most suitable. Speeches or scenes supposed to be read aloud (as in the second scene of the first part) might either be so read by the speaker or delivered by one or more actors from the inner stage.

It is clear that the Myth is capable of a good deal of variation. Complete scenes from the Plays might be inserted between or instead of its own scenes–one from the great tragedies, for example, somewhere in the second part; those included here might be dropped in favour of others at the expense of a little ingenuity in altering the verse or providing additions to the Myth. For convenience of reading, the extracts printed have been reduced to their shortest, without any implication that each abridgement is all that it is desirable to give in that particular instance. Each is a matter for the producer to decide with the Plays before him. But the natural interest which the authors (and especially the writer of the verse) feel in their attempt cause them to reserve the dramatic rights; applications for permission to produce the Myth as it stands or to make any alterations should be made to the Publisher.