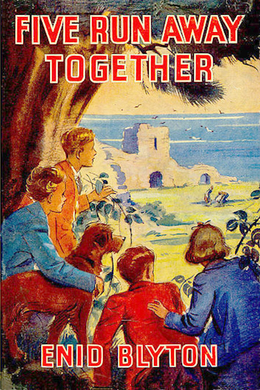 Five Run Away Together

Julian, Dick and Anne arrive in Kirrin Cottage to stay with Georgina for the holidays. They plan to spend time exploring Kirrin Island but their happiness is spoilt when Aunt Fanny falls ill and has to leave with Uncle Quentin to be treated in a far-off hospital. They are cared for by Aunt Fanny’s temporary cook, Mrs Stick, who is accompanied by her husband and their ghastly son Edgar. The Sticks and the four children come to hate each other. Mrs Stick repeatedly tries to poison George’s dog Timmy, prompting George to hatch a secret plan to run away to Kirrin Island. When Julian catches her leaving, she decides to allow the other children to go with her.

The children find evidence of other people visiting the island and suspect smugglers. The discovery of a young girl’s toys and clothes point to something sinister going on.

‘George dear, do settle down and do something,’ said George’s mother. ‘You keep wandering in and out with Timothy, and I am trying to have a rest.’

‘Sorry, Mother,’ said Georgina, taking hold of Timothy’s collar. ‘But I feel lonely without the others. Oh I do wish tomorrow would come. I’ve been without them for three whole weeks already.’

Georgina went to boarding–school with her cousin Anne, and in the holidays she and Anne, and Anne’s two brothers, Julian and Dick, usually joined up together and had plenty of fun. Now it was the summer holidays, and already three weeks had gone by. Anne, Dick and Julian had gone away with their father and mother, but Georgina’s parents had wanted their little girl with them, so she had not gone.

Now her three cousins were coming the next day to spend the rest of the summer holidays with her at her old home, Kirrin Cottage.

‘It will be lovely when they are here,’ said George, as she was always called, to Timothy her dog. ‘Simply lovely, Timothy. Don’t you think so?’

George was dressed, as usual, exactly like a boy, in jeans and jersey. She had always wanted to be a boy, and would never answer if she was called Georgina. So everyone called her George. She had missed her cousins very much during the first weeks of the summer holidays.

‘I used to think I liked best to be alone,’ George said to Timothy, who always seemed to understand every word she said. ‘But now I know that was silly. It’s nice to be with others and share things, and make friends.’

Timothy thumped his tail on the ground. He certainly liked being with the other children too. He was longing to see Julian, Anne and Dick again.

George took Timothy down to the beach. She shaded her eyes with her hand, and looked out to the entrance of the bay. In the middle of it, almost as if it were guarding it, lay a small, rocky island, on which rose the ruins of an old castle.

‘We’ll visit you again this summer, Kirrin Island,’ said George softly. ‘I haven’t been able to go to you yet this summer, because my boat was being mended—but it will be ready soon, then I’ll come to you. And I’ll look all round the old castle again. Oh Tim—do you remember the adventures we had on Kirrin Island last summer?’

Tim remembered quite well, because he himself had shared in the thrilling adventures. He had been down in the dungeons of the castle with the others; he had helped to find treasure there, and had had just as grand a time as the four children he loved. He gave a little bark.

‘You’re remembering, aren’t you, Tim?’ said George, patting him. ‘Won’t it be fun to go there again? We’ll go down into the dungeons again, shall we? And oh!—do you remember how Dick climbed down the deep well–shaft to rescue us?’

It was exciting, remembering all the things that had happened last year. It made George long all the more for the next day, when her three friends would arrive.

‘I wish Mother would let us go and live on the island for a week,’ thought George. ‘That would be the greatest fun we could have. To live on my very own island!’

It was George’s island. It really belonged to her mother, but she had said, two or three years back, that George could have it, and George now thought of it as really her own. She felt that all the rabbits on it belonged to her, all the wild birds and other creatures.

‘I’ll suggest that we go there for a week, when the others come,’ she thought, excitedly. ‘We’ll take our food and everything, and live there quite by ourselves. We shall feel like Robinson Crusoe.’

She went to meet her cousins the next day, driving the pony and trap by herself. Her mother wanted to come, but she said she did not feel very well. George felt a bit worried about her. So often lately her mother had said she didn’t feel very well. Perhaps it was the heat of the summer. The weather had been so very hot lately. Day after day had brought nothing but blue sky and sunshine. George had been burnt a dark–brown, and her eyes were startlingly blue in her sunburnt face. She had had her hair cut even shorter than usual, and it really was difficult to know whether she was a boy or a girl.

The train came in. Three hands waved madly from a window, and George shouted in delight.

The three children tumbled pell–mell out of their carriage. Julian yelled to a porter.

‘Our bags are in the guard’s van. Hallo, George! How are you? Golly, you’ve grown.’

They all had. They were all a year older and a year bigger than when they had had their exciting adventures on Kirrin Island. Even Anne, the youngest, didn’t look such a small girl now. She flung herself on George, almost knocking her over, and then went down on her knees beside Timothy, who was quite mad with joy to see his three friends.