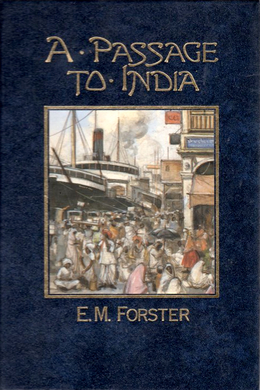 A Passage to India

When Adela Quested and her elderly companion Mrs Moore arrive in the Indian town of Chandrapore, they quickly feel trapped by its insular and prejudiced ‘Anglo-Indian’ community. Determined to escape the parochial English enclave and explore the ‘real India’, they seek the guidance of the charming and mercurial Dr Aziz, a cultivated Indian Muslim. But a mysterious incident occurs while they are exploring the Marabar caves with Aziz, and the well-respected doctor soon finds himself at the centre of a scandal that rouses violent passions among both the British and their Indian subjects. A masterful portrait of a society in the grip of imperialism, A Passage to India compellingly depicts the fate of individuals caught between the great political and cultural conflicts of the modern world.

Except for the Marabar Caves—and they are twenty miles off—the city hof Chandrapore presents nothing extraordinary. Edged rather than washed by the river Ganges, it trails for a couple of miles along the bank, scarcely distinguishable from the rubbish it deposits so freely. There are no bathing–steps on the river front, as the Ganges happens not to be holy here; indeed there is no river front, and bazaars shut out the wide and shifting panorama of the stream. The streets are mean, the temples ineffective, and though a few fine houses exist they are hidden away in gardens or down alleys whose filth deters all but the invited guest. Chandrapore was never large or beautiful, but two hundred years ago it lay on the road between Upper India, then imperial, and the sea, and the fine houses date from that period. The zest for decoration stopped in the eighteenth century, nor was it ever democratic. There is no painting and scarcely any carving in the bazaars. The very wood seems made of mud, the inhabitants of mud moving. So abased, so monotonous is everything that meets the eye, that when the Ganges comes down it might be expected to wash the excrescence back into the soil. Houses do fall, people are drowned and left rotting, but the general outline of the town persists, swelling here, shrinking there, like some low but indestructible form of life.

Inland, the prospect alters. There is an oval Maidan, and a long sallow hospital. Houses belonging to Eurasians stand on the high ground by the railway station. Beyond the railway—which runs parallel to the river—the land sinks, then rises again rather steeply. On the second rise is laid out the little civil station, and viewed hence Chandrapore appears to be a totally different place. It is a city of gardens. It is no city, but a forest sparsely scattered with huts. It is a tropical pleasaunce washed by a noble river. The toddy palms and neem trees and mangoes and pepul that were hidden behind the bazaars now become visible and in their turn hide the bazaars. They rise from the gardens where ancient tanks nourish them, they burst out of stifling purlieus and unconsidered temples. Seeking, light and air, and endowed with more strength than man or his works, they soar above the lower deposit to greet one another with branches and beckoning leaves, and to build a city for the birds. Especially after the rains do they screen what passes below, but at all times, even when scorched or leafless, they glorify the city to the English people who inhabit the rise, so that new–comers cannot believe it to be as meagre as it is described, and have to be driven down to acquire disillusionment. As for the civil station itself, it provokes no emotion. It charms not, neither does it repel. It is sensibly planned, with a red–brick club on its brow, and farther back a grocer’s and a cemetery, and the bungalows are disposed along roads that intersect at right angles. It has nothing hideous in it, and only the view is beautiful; it shares nothing with the city except the overarching sky.

The sky too has its changes, but they are less marked than those of the vegetation and the river. Clouds map it up at times, but it is normally a dome of blending tints, and the main tint blue. By day the blue will pale down into white where it touches the white of the land, after sunset it has a new circumference—orange, melting upwards into tenderest purple. But the core of blue persists, and so it is by night. Then the stars hang like lamps from the immense vault. The distance between the vault and them is as nothing to the distance behind them, and that farther distance, though beyond colour, last freed itself from blue.

The sky settles everything—not only climates and seasons but when the earth shall be beautiful. By herself she can do little—only feeble outbursts of flowers. But when the sky chooses, glory can rain into the Chandrapore bazaars or a benediction pass from horizon to horizon. The sky can do this because it is so strong and so enormous. Strength comes from the sun, infused in it daily, size from the prostrate earth. No mountains infringe on the curve. League after league the earth lies flat, heaves a little, is flat again. Only in the south, where a group of fists and fingers are thrust up through the soil, is the endless expanse interrupted. These fists and fingers are the Marabar Hills, containing the extraordinary caves.