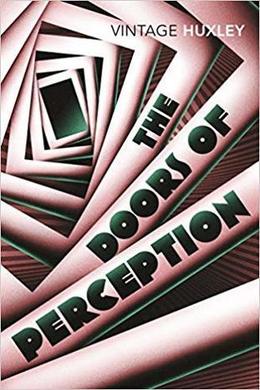 The Doors of Perception

‘The man who comes back through the Door in the Wall will never be quite the same as the man who went out’. Aldous Huxley first took mescalin in 1953 and continued his experiments with hallucinogenic drugs until 1963 when, on his deathbed, he asked for and was given LSD. Huxley explores the effects of the mescalin experience, describing how the drug enabled him to discover a ‘sacramental vision of reality’. He also discusses the spiritual and moral implications of the experience, demonstrating how negative emotions can transform man’s perceptual Nirvana into a ‘schizophrenic hell’.

It was in 1886 that the German pharmacologist, Ludwig Lewin, published the first systematic study of the cactus, to which his own name was subsequently given. Anhalonium Lewinii was new to science. To primitive religion and the Indians of Mexico and the American Southwest it was a friend of immemorially long standing. Indeed, it was much more than a friend. In the words of one of the early Spanish visitors to the New World, ‘they eat a root which they call Peyotl, and which they venerate as though it were a deity.’

Why they should have venerated it as a deity became apparent when such eminent psychologists as Jaensch, Havelock Ellis and Weir Mitchell began their experiments with mescalin, the active principle of peyotl. True, they stopped short at a point well this side of idolatry; but all concurred in assigning to mescalin a position among drugs of unique distinction. Administered in suitable doses, it changes the quality of consciousness more profoundly and yet is less toxic than any other substance in the pharmacologist’s repertory.

Mescalin research has been going on sporadically ever since the days of Lewin and Havelock Ellis. Chemists have not merely isolated the alkaloid; they have learned how to synthesize it, so that the supply no longer depends on the sparse and intermittent crop of a desert cactus. Alienists have dosed themselves with mescalin in the hope thereby of coming to a better, a first–hand understanding of their patients’ mental processes. Working unfortunately upon too few subjects within too narrow a range of circumstances, psychologists have observed and catalogued some of the drug’s more striking effects. Neurologists and physiologists have found out something about the mechanism of its action upon the central nervous system. And at least one professional philosopher has taken mescalin for the light it may throw on such ancient unsolved riddles as the place of mind in nature and the relationship between brain and consciousness.

There matters rested until, two or three years ago, a new and perhaps highly significant fact was observed. See the following papers: Schizophrenia: A New Approach. By Humphry Osmond and John Smythies. Journal of Mental Science. Vol. xcviii. April 1952. On Being Mad. By Humphry Osmond. Saskatchewan Psychiatric Services Journal. Vol. i. No. 2. September 1952. The Mescalin Phenomena. By John Smythies. The British Journal for the Philosophy of Science. Vol. iii. February 1953. Schizophrenia: A New Approach. By Abram Hoffer, Humphry Osmond and John Smythies. The Journal of Mental Science. Vol. c. No. 418. January 1954. Numerous other papers on the biochemistry, pharmacology, psychology and neurophysiology of schizophrenia and the mescalin phenomena are in preparation. Actually the fact had been staring everyone in the face for several decades; but nobody, as it happened, had noticed it until a young English psychiatrist, at present working in Canada, was struck by the close similarity, in chemical composition, between mescalin and adrenalin. Further research revealed that lysergic acid, an extremely potent hallucinogen derived from ergot, has a structural biochemical relationship to the others. Then came the discovery that adrenochrome, which is a product of the decomposition of adrenalin, can produce many of the symptoms observed in mescalin intoxication. But adrenochrome probably occurs spontaneously in the human body. In other words, each one of us may be capable of manufacturing a chemical, minute doses of which are known to cause profound changes in consciousness. Certain of these changes are similar to those which occur in that most characteristic plague of the twentieth century, schizophrenia. Is the mental disorder due to a chemical disorder? And is the chemical disorder due, in its turn, to psychological distresses affecting the adrenals? It would be rash and premature to affirm it. The most we can say is that some kind of a prima facie case has been made out. Meanwhile the clue is being systematically followed, the sleuths—biochemists, psychiatrists, psychologists—are on the trail.

By a series of, for me, extremely fortunate circumstances I found myself, in the spring of 1953, squarely athwart that trail. One of the sleuths had come on business to California. In spite of seventy years of mescalin research, the psychological material at his disposal was still absurdly inadequate, and he was anxious to add to it. I was on the spot and willing, indeed eager, to be a guinea–pig. Thus it came about that, one bright May morning, I swallowed four–tenths of a gramme of mescalin dissolved in half a glass of water and sat down to wait for the results.

We live together, we act on, and react to, one another; but always and in all circumstances we are by ourselves. The martyrs go hand in hand into the arena; they are crucified alone