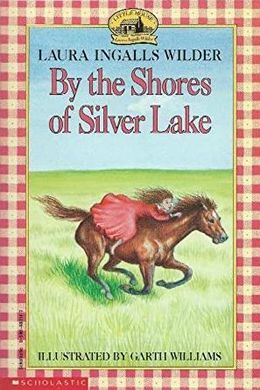 By the Shores of Silver Lake

The adventures of Laura Ingalls and her family continue as they move from their little house on the banks of Plum Creek to the wilderness of the unsettled Dakota Territory. Here Pa works on the new railroad until he finds a homestead claim that is perfect for their new little house. Laura takes her first train ride as she, her sisters, and their mother come out to live with Pa on the shores of Silver Lake. After a lonely winter in the surveyors’ house, Pa puts up the first building in what will soon be a brand-new town on the beautiful shores of Silver Lake. The Ingallses’ covered-wagon travels are finally over.

Laura was washing the dishes one morning when old Jack, lying in the sunshine on the doorstep, growled to tell her that someone was coming. She looked out, and saw a buggy crossing the gravelly ford of Plum Creek.

Ma sighed. She was ashamed of the untidy house, and so was Laura. But Ma was too weak and Laura was too tired and they were too sad to care very much.

Mary and Carrie and baby Grace and Ma had all had scarlet fever. The Nelsons across the creek had had it too, so there had been no one to help Pa and Laura. The doctor had come every day; Pa did not know how he could pay the bill. Far worst of all, the fever had settled in Mary’s eyes, and Mary was blind.

She was able to sit up now, wrapped in quilts in Ma’s old hickory rocking chair. All that long time, week after week, when she could still see a little, but less every day, she had never cried. Now she could not see even the brightest light any more. She was still patient and brave.

Her beautiful golden hair was gone. Pa had shaved it close because of the fever, and her poor shorn head looked like a boy’s. Her blue eyes were still beautiful, but they did not know what was before them, and Mary herself could never look through them again to tell Laura what she was thinking without saying a word.

“Who can it be at this hour in the morning?” Mary wondered, turning her ear toward the sound of the buggy.

“It’s a strange woman alone in a buggy. She’s wearing a brown sunbonnet and driving a bay horse,” Laura answered. Pa had said that she must be eyes for Mary.

“Can you think of anything for dinner?” Ma asked. She meant for a company dinner, if the woman stayed till dinnertime.

There was bread and molasses, and potatoes. That was all. This was springtime, too early for garden vegetables; the cow was dry and the hens had not yet begun to lay their summer’s eggs. Only a few small fish were left in Plum Creek. Even the little cottontail rabbits had been hunted until they were scarce.

Pa did not like a country so old and worn out that the hunting was poor. He wanted to go west. For two years he had wanted to go west and take a homestead, but Ma did not want to leave the settled country. And there was no money. Pa had made only two poor wheat crops since the grasshoppers came; he had barely been able to keep out of debt, and now there was the doctor’s bill.

The buggy stopped and the strange woman sat in it, looking at Laura and Ma in the doorway. She was a pretty woman, in her neat brown print dress and sunbonnet. Laura felt ashamed of her own bare feet and limp dress and uncombed braids. Then Ma said slowly, “Why, Docia!”

“I wondered if you’d know me,” the woman said. “A good deal of water’s gone under the bridge since you folks left Wisconsin.”

She was the pretty Aunt Docia who had worn the dress with buttons that looked like blackberries, long ago at the sugaring–off dance at Grandpa’s house in the Big Woods of Wisconsin.

She was married now. She had married a widower with two children. Her husband was a contractor, working on the new railroad in the west. Aunt Docia was driving alone in the buggy, all the way from Wisconsin to the railroad camps in Dakota Territory.

She had come by to see if Pa would go with her. Her husband, Uncle Hi, wanted a good man to be storekeeper, bookkeeper, and timekeeper, and Pa could have the job.

“It pays fifty dollars a month, Charles,” she said.

A kind of tightness smoothed out of Pa’s thin cheeks and his blue eyes lighted up. He said slowly, “Seems like I can draw good pay while I’m looking for that homestead, Caroline. “

Ma still did not want to go west. She looked around the kitchen, at Carrie and at Laura standing there with Grace in her arms.

“Charles, I don’t know,” she said. “It does seem providential, fifty dollars a month. But we’re settled here. We’ve got the farm.”

“Listen to reason, Caroline,” Pa pleaded. “We can get a hundred and sixty acres out west, just by living on it, and the land’s as good as this is, or better. If Uncle Sam’s willing to give us a farm in place of the one he drove us off of, in Indian Territory, I say let’s take it. The hunting’s good in the west, a man can get all the meat he wants.”

Laura wanted so much to go that she could hardly keep from speaking.

“How could we go now?” Ma asked. “With Mary not strong enough to travel.”

It seemed a long time before Ma said gently, “Well, Charles, you must do as you think best.”