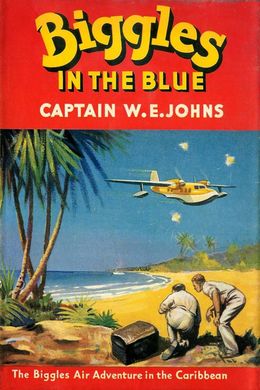 Biggles in the Blue

Biggles is sent to Jamaica to recover a cache of secret papers – blueprints of German secret weapons under development at the end of World War II. Their owner, Werner Wolff, had been living in Jamaica under an assumed name for many years. Unfortunately, Wolff had died without revealing where he hid his papers. There are few clues to go on, just a tracing of a oval shape with a little Square on it. And Biggles must move fast because his old adversary, von Stalhein, now in the employ of a secret service behind the Iron Curtain, is in Jamaica hunting for the same thing.

Air Commodore Raymond, head of the Air Section of Scotland Yard, looked up from his desk as his chief operational pilot entered the room and asked the question. A peculiar smile softened his austere features and something like a twinkle appeared in his eyes as he answered: ‘Yes, make yourself comfortable. I have an item of news that I feel sure will interest you.’

Biggles pulled up a chair and reached for a cigarette. ‘Tell me the worst,’ he requested. ‘Nothing would surprise me.’

Biggles’s eyebrows lifted a trifle. ‘I was wrong,’ he admitted. ‘That does surprise me. Somehow I have never associated our frigid Prussian friend with palm beaches and blue lagoons.’

‘His purpose in going there has nothing to do with either,’ stated the Air Commodore dryly.

‘I can believe that,’ returned Biggles. ‘How did you know he was there?’

‘That’s comforting, anyway. Tell me about it.’

The Air Commodore settled back in his chair and put the tips of his fingers together. ‘It’s a queer story, mostly fact, but padded with a certain amount of surmise dropped in to fill the gaps. However, it all ties up pretty well. Do you recall a friend of von Stalhein’s named Werner Wolff?’

‘He rarely came into your line of country. He was closely associated with von Stalhein in his early days at the Wilhelmstrasse. Between the wars Wolff left the Intelligence Service for politics, which pay off rather better. During the Hitler régime, he became a sort of liaison officer with the big industrial concerns, mostly naval armaments, and like some of the others he got into the big money by farming out contracts for war material. Unlike the others, though, he didn’t keep all his eggs in a German basket. Nor did he get caught at the finish. He made several trips to the United States before America came into the war and may have feathered a nest there. At least, that’s what we supposed. Maybe he wasn’t so sure that Hitler was going to win the war, for when it ended he just faded away and was never seen or heard of again; which means that he must have made his plans for escape and retirement with more care than the rest of them. It now seems that through the years since the war, while he was in hiding, he kept in touch with his old friend, von Stalhein.’

‘I take it that you’ve now discovered where this wily fox went to ground?’

The Air Commodore smiled ruefully. ‘Yes. For the past eight years he has resided on the outskirts of Kingston, Jamaica, as a respectable Norwegian gentleman named Christen Hagen.’

Biggles grinned. ‘Pretty good. How did he manage that?’

‘Through foresight, presumably, and being in a position to provide himself with everything he would need to get away with such a performance. Posing as a lone navigator, he turned up at Kingston in a small yacht named the Vega, having sailed single–handed across the Atlantic. He had an auxiliary engine to help him. That’s what he said on arrival.’

‘It could have been true. It has been done, often—and without an engine.’

‘His papers and the ship’s papers were in order, so he was allowed to land; and having landed, he stayed. Apparently nobody bothered about him afterwards. He was quiet and self–supporting so there was no reason why he shouldn’t stay if he wanted to. Anyway, he bought an old place in a secluded quarter with the enchanting name of Rumkeg Haven, in a bay called Tew’s Anchorage. Tew, I believe, was a notorious pirate in his day.’

‘How was it that nobody recognized Wolff?’

‘He had grown a beard during his long trip, and being sunburnt, and in rough sea clothes, he bore little resemblance to the spruce officer of Hitler’s staff. He kept his beard, of course, and like many people in the tropics wore dark glasses against sun–glare.’

‘The Port Authorities would search his craft. If he had his loot on board, why wasn’t it found?’

The Air Commodore shrugged. ‘Obviously, he hadn’t got it with him. He may have put it ashore somewhere before making his official landing. We’ve no proof that he came straight to Jamaica.’

‘How did all this come to light?’ inquired Biggles curiously.

‘How did that reveal his identity?’

‘There was found, in his safe, a personal letter of commendation from Hitler, with a signed photograph, which he must have valued so highly that he couldn’t bring himself to destroy it. That was his one slip, or weakness; a natural one, perhaps. He had disposed of, or hidden, everything else concerning his past.’

‘When did this happen?’