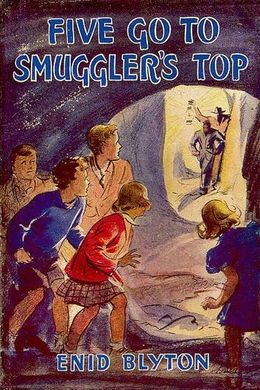 The Five find adventure, when they spend Easter vacation at Mr. Lenoir’s sinister house Smuggler’s Top. Set high above an eerie marsh, the house is honeycombed with hidden staircases and tunnels that once served as a hideaway for smugglers. When strange lights begin to appear, the Five suspect that the tunnels are once more in use.

One fine day right at the beginning of the Easter holidays, four children and a dog travelled by train together.

‘Soon be there now,’ said Julian, a tall strong boy, with a determined face.

‘Woof,’ said Timothy the dog, getting excited, and trying to look out of the window too.

Anne was his younger sister. She put her head out of the window. ‘We’re coming into Kirrin Station!’ she said. ‘I do hope Aunt Fanny will be there to meet us.’

‘Of course she will!’ said Georgina, her cousin. She looked more like a boy than a girl, for she wore her hair very short, and it curled close about her head. She too had a determined face, like Julian. She pushed Anne away and looked out of the window.

‘It’s nice to be going home,’ she said. ‘I love school—but it will be fun to be at Kirrin Cottage and perhaps sail out to Kirrin Island and visit the castle there. We haven’t been since last summer.’

‘Dick’s turn to look out now,’ said Julian, turning to his younger brother, a boy with a pleasant face, sitting reading in a corner. ‘We’re just coming into sight of Kirrin, Dick. Can’t you stop reading for a second?’

‘It’s such an exciting book,’ said Dick, and shut it with a clap. ‘The most exciting adventure story I’ve ever read!’

‘Pooh! I bet it’s not as exciting as some of the adventures we’ve had!’ said Anne, at once.

It was quite true that the five of them, counting in Timmy the dog, who always shared everything with them, had had the most amazing adventures together. But now it looked as if they were going to have nice quiet holidays, going for long walks over the cliffs, and perhaps sailing out in George’s boat to their island of Kirrin.

‘I’ve worked jolly hard at school this term,’ said Julian. ‘I could do with a holiday!’

‘You’ve gone thin,’ said Georgina. Nobody called her that. They all called her George. She would never answer to any other name. Julian grinned.

‘Well, I’ll soon get fat at Kirrin Cottage, don’t you worry! Aunt Fanny will see to that. She’s a great one for trying to fatten people up. It will be nice to see your mother again, George. She’s an awfully good sort.’

‘Yes. I hope Father will be in a good temper these hols,’ said George. ‘He ought to be because he has just finished some new experiments, Mother says, which have been quite successful.’

George’s father was a scientist, always working out new ideas. He liked to be quiet, and sometimes he flew into a temper when he could not get the peace he needed or things did not go exactly as he wanted them to. The children often thought that hot–tempered Georgina was very like her father! She too could fly into fierce tempers when things did not go right for her.

Aunt Fanny was there to meet them. The four children jumped out on the platform and rushed to hug her. George got there first. She was very fond of her gentle mother, who had so often tried to shield her when her father got angry with her. Timmy pranced round, barking in delight. He adored George’s mother.

She patted him, and he tried to stand up and lick her face. ‘Timmy’s bigger than ever!’ she said, laughing. ‘Down, old boy! You’ll knock me over.’

Timmy was certainly a big dog. All the children loved him, for he was loyal, loving and faithful. His brown eyes looked from one to the other, enjoying the children’s excitement. Timmy shared in it, as he shared in everything.

But the person he loved most, of course, was his mistress, George. She had had him since he was a small puppy. She took him to school with her each term, for she and Anne went to a boarding–school that allowed pets. Otherwise George would most certainly have refused to go!

They set off to Kirrin in the pony–trap. It was very windy and cold, and the children shivered and pulled their coats tightly round them.

‘It’s awfully cold,’ said Anne, her teeth beginning to chatter. ‘Colder than in the winter!’

‘It’s the wind,’ said her aunt, and tucked a rug round her. ‘It’s been getting very strong the last day or two. The fishermen have pulled their boats high up the beach for fear of a big storm.’

The children saw the boats pulled right up as they passed the beach where they had bathed so often. They did not feel like bathing now. It made them shiver even to think of it.

The wind howled over the sea. Great scudding clouds raced overhead. The waves pounded on the beach and made a terrific noise. It excited Timmy, who began to bark.

‘Be quiet, Tim,’ said George, patting him. ‘You will have to learn to be a good quiet dog now we are home again, or Father will be cross with you. Is Father very busy, Mother?’