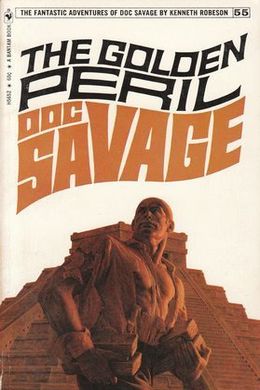 Few had known of the ancient Mayan kingdom which provided Doc Savage with billions of dollars in precious gold to finance his unceasing fight against evil. Threatened by THE LEADER and his international band of cutthroat warriors, the amazing Man of Bronzed cunningly battles for the financial security and future peace of the entire world.

The vultures knew a feast awaited them. They hung almost motionless in the gray, ominous sky. Their beady eyes stared greedily down into the deep canyon that lay beneath them.

The canyon was gloomy as a grave. Its walls rose sheer and straight for an interminable distance. Bowlders and runty trees lined its sides. A small stream droned a mournful dirge in the center. Except for the dirge of that stream there was no sound.

But death waited there!

Only the vultures from above could have seen the men–vultures below. They were huddled behind bowlders. The half darkness of the canyon combined with the khaki they wore to make them almost invisible. Fully two–score men were there.

They were of almost every race and nationality. But they were alike in the greed that shone in their eyes—and in the modern instruments of murder they carried.

A faint sound came from the far end of this canyon. The dim figure of a man appeared in the distance, stood motionless for a moment, then vanished.

There was a sudden tenseness among the hidden men. Weapons were moved cautiously.

“Be quiet. Do not move until I give the command.”

The order was given softly, but there was a chill note in the voice that brought instant obedience. The man who had spoken was not large, but there was a look of utter ruthlessness on his copper–tinted features and in his glacier–cold eyes. His shoulders were broad, his frame powerful. He wore the insignia of a general.

The aid at his side spoke in a whisper: “The trap has been set well, my general.”

“Si. Soon the jaws of that trap will close.” The general’s Spanish was guttural, as if he were speaking a language still partly unfamiliar to him. “But care must be taken. Those we await have keen eyes.”

Even as he spoke, more figures came into view at the far end of the canyon. Their eyes searched the scene before them, then one raised an arm in signal. A donkey train moved around a bend.

Scouts were out ahead. Other tall men moved beside the heavily loaded beasts of burden. Still others brought up the rear.

A faint fire kindled in the general’s eyes, and his lips made sucking sounds.

“Soon that will be ours!” he breathed fiercely.

The men escorting the donkey train were unusual in appearance. They were tall, with thick shoulders and powerful muscles. Almost copper–colored, they wore a short mantle over their shoulders, a network of leather which had projecting ends. They wore broad girdles, of a dark blue and leggings fashioned like football shin guards.

Those in the lead carried modern rifles. The others were armed only with spears and short clubs bearing vicious, razor–edged flakes of stone.

Slowly, they advanced. A few were chanting a weird song, utterly unaware of the terror and death that soon was to strike.

“Another sun and we shall reach Blanco Grande,” said one.

“Then we will have fulfilled another task for Doc Savage,” his companion replied. “It has been long since we last saw the bronze man. I wish he would come again.”

“He is busy, but he will visit us again some day. We shall see him if we are patient,” rejoined the first speaker.

But he was wrong in at least part of his statement. None of those with the donkey train ever were to see Doc Savage again. At that moment, they were passing squarely between the khaki–clad men concealed on either side of the trail.

Instantly, the quiet of the canyon was shattered by the murder–roar of guns. Khaki–clad men reared up from behind bowlders with automatic rifles. A rain of lead poured from those rifles into the ranks of the guards with the donkey train.

The guards were brave. The leaders brought up their guns, tried to reply to the merciless hail of death. Then they went down, almost cut in two by lead.

The others hurled their spears and dived for the temporary safety of the rocks. The heavily laden donkeys snorted, burst into a panicky run. Khaki–clad figures leaped toward the trail and barred their path.

Shrill, pain–stricken cries came from the doomed guards. One grunted with satisfaction as his spear drove through the body of an attacker, only to die a moment later with a bullet through his brain.

Crimson stained the cold waters of the creek. It became literally a river of blood. The crashing roar of high–powered guns filled the canyon with thunderous echoes.

“Let none escape! Kill them all!” roared the general. The glacier–cold of his eyes had melted. The orbs were now red with a killing lust.