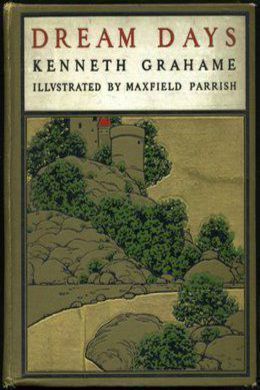 This sequel to The Golden Age is an informative snapshot of the late Victorian era that captures the world of imagination inhabited by children. These stories are written with humor and wit as Grahame depicts a private, separate universe of five siblings whose concerns rarely overlap with the world of adults, whom they refer to as Olympians. The collection’s most famous story, The Reluctant Dragon, sees the narrator and his neighbor Charlotte following dragon footprints in the snow one winter’s evening. Meeting with a Circus Man, they are regaled with tales of a dragon, which, modest and retiring, was reluctant to fight St. George purely for the sake of convention. Grahame captures perfectly the tone of a childhood enriched by legend and romance, and unsullied by the concerns of adulthood.

In the matter of general culture and attainments, we youngsters stood on pretty level ground. True, it was always happening that one of us would be singled out at any moment, freakishly, and without regard to his own preferences, to wrestle with the inflections of some idiotic language long rightly dead; while another, from some fancied artistic tendency which always failed to justify itself, might be told off without warning to hammer out scales and exercises, and to bedew the senseless keys with tears of weariness or of revolt. But in subjects common to either sex, and held to be necessary even for him whose ambition soared no higher than to crack a whip in a circus–ring—in geography, for instance, arithmetic, or the weary doings of kings and queens—each would have scorned to excel. And, indeed, whatever our individual gifts, a general dogged determination to shirk and to evade kept us all at much the same dead level,—a level of Ignorance tempered by insubordination.

Fortunately there existed a wide range of subjects, of healthier tone than those already enumerated, in which we were free to choose for ourselves, and which we would have scorned to consider education; and in these we freely followed each his own particular line, often attaining an amount of special knowledge which struck our ignorant elders as simply uncanny. For Edward, the uniforms, accoutrements, colours, and mottoes of the regiments composing the British Army had a special glamour. In the matter of facings he was simply faultless; among chevrons, badges, medals, and stars, he moved familiarly; he even knew the names of most of the colonels in command; and he would squander sunny hours prone on the lawn, heedless of challenge from bird or beast, poring over a tattered Army List. My own accomplishment was of another character—took, as it seemed to me, a wider and a more untrammelled range. Dragoons might have swaggered in Lincoln green, riflemen might have donned sporrans over tartan trews, without exciting notice or comment from me. But did you seek precise information as to the fauna of the American continent, then you had come to the right shop. Where and why the bison “wallowed”; how beaver were to be trapped and wild turkeys stalked; the grizzly and how to handle him, and the pretty pressing ways of the constrictor,—in fine, the haunts and the habits of all that burrowed, strutted, roared, or wriggled between the Atlantic and the Pacific,—all this knowledge I took for my province. By the others my equipment was fully recognized. Supposing a book with a bear–hunt in it made its way into the house, and the atmosphere was electric with excitement; still, it was necessary that I should first decide whether the slot had been properly described and properly followed up, ere the work could be stamped with full approval. A writer might have won fame throughout the civilized globe for his trappers and his realistic backwoods, and all went for nothing. If his pemmican were not properly compounded I damned his achievement, and it was heard no more of.

Harold was hardly old enough to possess a special subject of his own. He had his instincts, indeed, and at bird’s–nesting they almost amounted to prophecy. Where we others only suspected eggs, surmised possible eggs, hinted doubtfully at eggs in the neighbourhood, Harold went straight for the right bush, bough, or hole as if he carried a divining–rod. But this faculty belonged to the class of mere gifts, and was not to be ranked with Edward’s lore regarding facings, and mine as to the habits of prairie–dogs, both gained by painful study and extensive travel in those “realms of gold,” the Army List and Ballantyne.