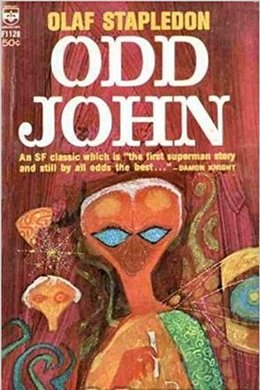 John Wainwright is a freak - a human mutation with an extraordinary intelligence which is both awesome and frightening to all who come into contact with him. Ordinary humans were just playthings to John - subjects for an endless chain of experiments. Their feelings, and sometimes even their lives, are expendable. Odd John has a plan - to create a new order on Earth, a new supernormal species. But the world is not ready for such a change…

When I told John that I intended to write his biography, he laughed.

“My dear man!” he said, “But of course it was inevitable.” The word “man” on John’s lips was often equivalent to “fool.”

He replied, “Yes, but can it really see the king? Can you, puss, really see me?”

This from a queer child to a full–grown man.

John was right. Though I had known him since he was a baby, and was in a sense intimate with him, I knew almost nothing of the inner, the real John. To this day I know little but the amazing facts of his career. I know that he never walked till he was six, that before he was ten he committed several burglaries and killed a policeman, that at eighteen, when he still looked a young boy, he founded his preposterous colony in the South Seas, and that at twenty–three, in appearance but little altered, he outwitted the six warships that six Great Powers had sent to seize him. I know also how John and all his followers died.

Such facts I know; and even at the risk of destruction by one or other of the six Great Powers, I shall tell the world all that I can remember.

Something else I know, which will be very difficult to explain. In a confused way I know why he founded his colony. I know too that although he gave his whole energy to this task, he never seriously expected to succeed. He was convinced that sooner or later the world would find him out and destroy his work. “Our chance,” he once said, “is not as much as one in a million.” And then he laughed.

John’s laugh was strangely disturbing. It was a low, rapid, crisp chuckle. It reminded me of that whispered crackling prelude which sometimes precedes a really great crash of thunder. But no thunder followed it, only a moment’s silence; and for his hearers an odd tingling of the scalp.

I believe that this inhuman, this ruthless but never malicious laugh of John’s contained the key to all that baffles me in his character. Again and again I asked myself why he laughed just then, what precisely was he laughing at, what did his laughter really mean, was that strange noise really laughter at all, or some emotional reaction incomprehensible to my kind? Why, for instance, did the infant John laugh through his tears when he had upset a kettle and was badly scalded? I was not present at his death, but I feel sure that, when his end came, his last breath spent itself in zestful laughter. Why?

In failing to answer these questions, I fail to understand the essential John. His laughter, I am convinced, sprang from some aspect of his experience entirely beyond my vision. I am therefore, of course, as John affirmed, a very incompetent biographer. But if I keep silence, the facts of his unique career will be lost for ever. In spite of my incompetence, I must record all that I can, in the hope that, if these pages fall into the hands of some being of John’s own stature, he may imaginatively see through them to the strange but glorious spirit of John himself.

That others of his kind, or approximately of his kind, are now alive, and that yet others will appear, is at least probable. But as John himself discovered, the great majority of these very rare supernormals, whom John sometimes called “wide–awakes,” are either so delicate physically or so unbalanced mentally that they leave no considerable mark on the world. How pathetically one–sided the supernormal development may be is revealed in Mr. J. D. Beresford’s account of the unhappy Victor Stott. I hope that the following brief record will at least suggest a mind at once more strikingly “superhuman” and more broadly human.

That the reader may look for something more than an intellectual prodigy I will here at the outset try to give an impression of John’s appearance in his twenty–third and last summer.

He was indeed far more like a boy than a man, though in some moods his youthful face would assume a curiously experienced and even patriarchal expression. Slender, long limbed, and with that unfinished coltish look characteristic of puberty, he had also a curiously finished grace all his own. Indeed to those who had come to know him he seemed a creature of ever–novel beauty. But strangers were often revolted by his uncouth proportions. They called him spiderish. His body, they complained, was so insignificant, his legs and arms so long and lithe, his head all eye and brow.

Now that I have set down these characters I cannot conceive how they might make for beauty. But in John they did, at least for those of us who could look at him without preconceptions derived from Greek gods, or film stars. With characteristic lack of false modesty, John once said to me, “My looks are a rough test of people. It they don’t begin to see me beautiful when they have had a chance to learn, I know they’re dead inside, and dangerous.”

But let me complete the description. Like his fellow–colonists, John mostly went naked”