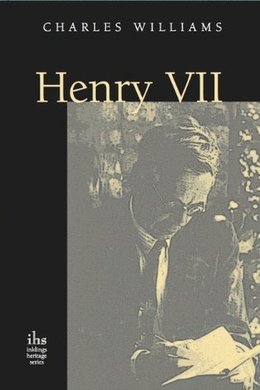 Henry VII is less spectacular than his descendants, but not less interesting or even exciting. The first of the Tudors has been less written about than any (except Edward VI). He supplanted a dynasty and subordinated an aristocracy; he collected a treasure and created a fleet. But he created also the engine of monarchy. He did this because his desires were never at odds with his intentions: he possessed an equilibrium greater than any other Tudor-even Elizabeth. That fixed equilibrium of his mind released a very high industry and decision. In his later life his methods a little overcame him; his suspicion, his caution, his acquisitiveness escaped control. It was then that by certain general measures and especially by one little particular act he prepared the way for the destruction of that engine of monarchy he had created. The reign of Henry VII was the seed of the future, but it was already worm-eaten.

The marriage in after years was said by St. John Fisher, on the authority of Margaret herself, to have been directed by supernatural power. She had been, a little before her ninth birthday, offered a choice between two bridegrooms, one of whom was Edmund. She had been in some doubt and had taken her difficulty to a friend, a pious old lady, who had told her how St. Nicholas was “the helper of all true maidens,” and had advised her to invoke his aid. At about four in the morning of the day when she was to decide, the saint, in episcopal vestments, had appeared to her, and told her to take Edmund for her husband. She obeyed; she “inclined her mind” to Edmund, and so (said Fisher) became the ancestress of kings. This had seemed unlikely at the time, for the legal instrument that had corrected the birth of his mother’s house, called Beaufort, and put them within the law, had particularly separated them from the Throne. An act of Richard II and again of Henry IV had declared the Beauforts capable of everything except the royal dignity. Nor on the other side could the relationship carry any claim. Katherine of Valois had married—if she had married—an unknown man, a Welshman, a hanger–on of the Court, Owen Tudor. It had been something of a scandal. Certainly the Tudor professed a descent that made Valois and Plantagenet seem upstarts; he said he sprang from the original kings of Britain, Cadwallader and the rest. Edmund, the son of Owen and Katherine, abandoned the arms of that pre–historic house in favour of a more modern shield, quartering the arms of England and France. It was at once a less modest and a more modest display. He had been brought up with his half–brother, the son of Henry V, who had already become Henry VI, and he enjoyed that King’s favour, so long as the King had favours to grant. Edmund died, still young, in 1456.

The wars of the Roses were then a threat to the land. In the preceding year the first skirmish had taken place at St. Albans, and the King had fallen into the hands of the Duke of York, but serious fighting did not begin till 1459, and not until 1460 did the Duke make his own public claim to the Throne. At St. Albans the Earl of Somerset, also a Beaufort and their chief, had been killed. There had been whispers that Henry VI had intended to make Somerset heir–presumptive, in spite of the legal disability. The suggestion was unpopular, doubly so because Somerset was regarded as responsible for the loss of English territory in France, but also unpopular in itself. The whole idea did no good to the Beauforts or indeed to the Crown.

Margaret Beaufort, who was then not quite fourteen, had taken or been taken to refuge with her husband’s relations in Wales. His brother, Jasper Tudor, who had fought at St. Albans, was Earl of Pembroke, and lord of Pembroke Castle. There, towards the end of January 1456–7, her child was born—probably on 28th January, and there for some years he remained, slowly discovering who he was, and how for all the panoply of three royalties—Welsh, English, and French—that danced about him, he was, when it came to the point, no one very particular. His mother, before he was four and she eighteen, had left him to Jasper in Pembroke, and had married again; her new husband was the Lord Stafford, a son of the Duke of Buckingham. It left him by himself then, but it was to be of use later.

The child’s legal misfortunes were not ended with his birth. The Roses pranced bloodily over the land, and were marked more and more by actions of personal hate. “The war,” in Mr. Belloc’s phrase, “was becoming a violent vendetta of reciprocal murder.” The Duke of York and his young son were shamefully killed in 1460. In 1461 Henry’s grandfather, Owen, who was still alive, and his uncle Jasper of Pembroke, led a force westward in support of the Queen, Margaret of Anjou. They marched to Mortimer’s Cross, where on 2nd February they met a much more brilliant captain, Edward Plantagenet, now Duke of York, by succession to his murdered father, and they were utterly defeated. Owen Tudor was taken prisoner and promptly executed; his head, adorned with candles, was set up at Hereford. Jasper escaped from the battle and fled to Scotland. Edward Plantagenet proclaimed himself King, and was crowned at Westminster. Henry VI was captured and confined in the Tower. Edward proceeded to attaint his chief enemies; among them Jasper Tudor in exile, and the small Henry Tudor in Pembroke. His inherited title of Richmond was formally bestowed on Edward IV’s brother, George, Duke of Clarence